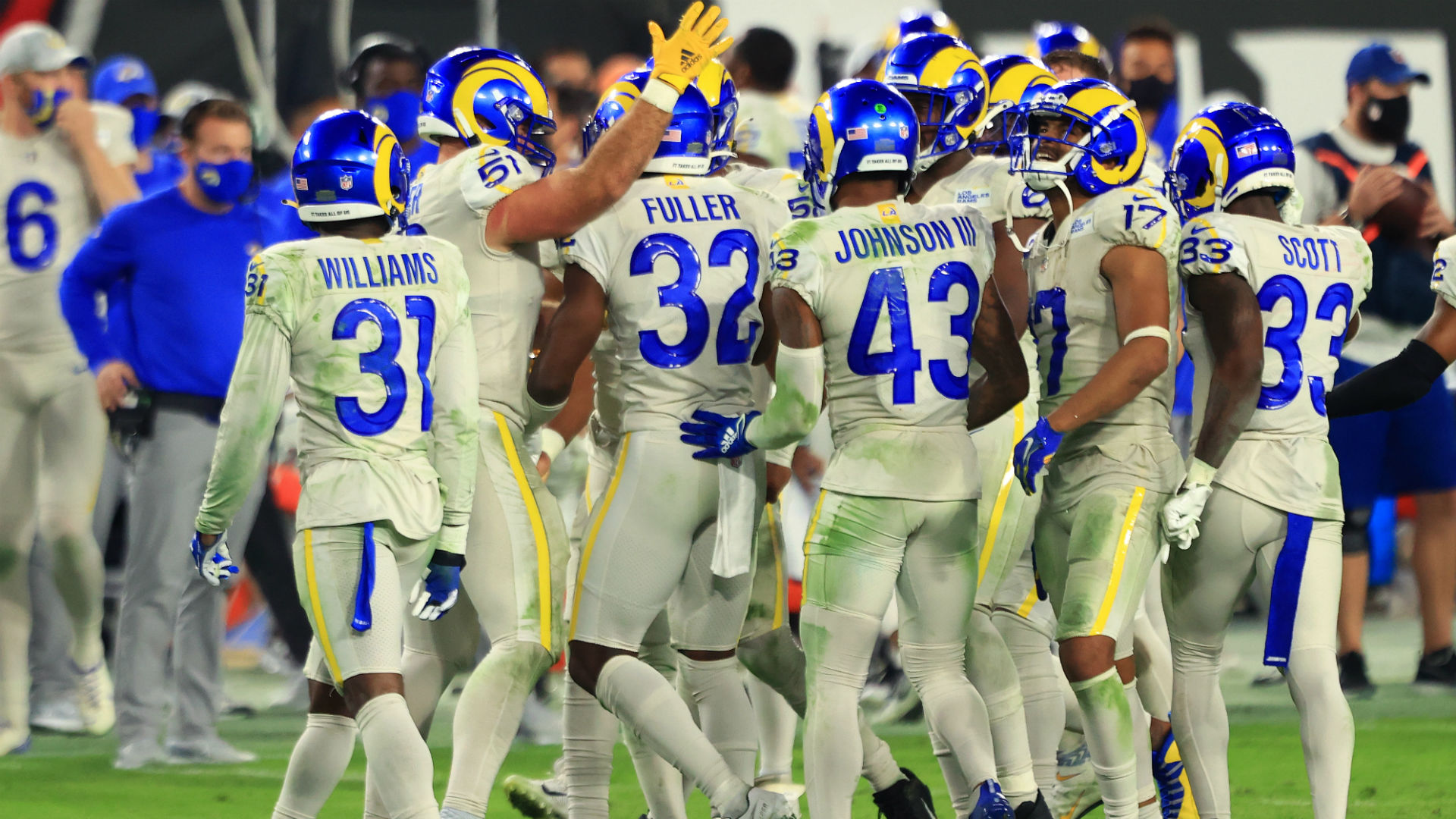 The Rams couldn’t have asked for much more from their defense in the second half Monday night in a 27-24 victory over the Buccaneers.

LA held Tom Brady and the Bucs to just 251 total yards for the game and 113 yards of offense in the second half. Brady was picked off twice down the stretch, including on a last-chance march down the field in the final two minutes of regulation.

The Rams’ offense wasn’t spectactular, but Jared Goff did enough to outperform Brady. Goff finished completing 39 of 51 passes (76.5 percent) for 376 yards and three touchdowns, with two interceptions. Cooper Kupp was his top target, hauling in 11 catches for 145 yards.

Much of LA’s production came in the first half, with Goff tossing TDs to Robert Woods and Van Jefferson. The Rams tacked on a field goal at the end of the half thanks to a great job by Goff and the offense to hurry down the field and spike the ball with 1 second to spare following a 35-yard reception by Woods. That gave LA a 17-14 lead at halftime.

Brady completed just 26 of 48 (54.2 percent) for 216 yards and two touchdowns, with two interceptions in the second half.

Still, Brady and the Bucs had a chance thanks to the Tampa Bay defense. Jason Pierre-Paul picked off a screen pass on the first drive of the second half, setting up a Ryan Succop field goal to tie the game at 17-17. And Jordan Whitehead came up with another interception, which led to a touchdown drive that ended with a 13-yard pass from Brady to Chris Godwin to tie it again at 24-24.

Goff and the Rams’ offense came through when it mattered though, moving the ball into field goal range from Matt Gay, who connected from 40 yards out to take the definitive 27-24 lead.

LA’s defense came up with one more big play to end the game as rookie safety Jordan Fuller came up with his second interception of the night, allowing the Rams to run out the clock and end the game on a Johnny Hekker punt.

The Rams (7-3) are now tied for first with the Seahawks in the NFC West, while the Buccaneers (7-4) fall 1.5 games back behind the Saints in the NFC South.

11:17 p.m. — INTERCEPTION.  Brady with another overthrow and Fuller with another pick. Rams take over at 37-yard line with 1:49 remaining, Bucs only have one timeout.

11:00 p.m. — TOUCHDOWN, BUCCANEERS.  Brady finds Godwin wide open on the right side and Godwin leaps and reaches across for the score. Tampa Bay ties the game at 24-24 with 3:53 left to play.

10:53 p.m. — TURNOVER ON DOWNS.  Godwin gets tripped up by Evans, who was being jammed at the line of scrimmage by Jalen Ramsey, and can’t catch Brady’s pass on fourth down. Rams take over at their 43-yard line, 8:16 remaining.

10:48 p.m. — Rams punt.  Another three-and-out for LA. Looked like they might have gotten the ball on a fumble on the return, but a Rams player touched the ball first so it’s automatically Tampa Bay ball. Bucs have it at their 37-yard line, 10:18 left to play.

10:42 p.m. — Buccaneers punt.  Strange play on third down as Brady’s pass is batted back to him, and he throws it a second time to Evans. The illegal forward pass penalty is declined because Evans was brought down short of the line to gain, so Tampa Bay punts it away. Rams get the ball back at their 12-yard line, 11:51 remaining.

10:26 p.m. — Rams punt.  Big play by Ross Cockrell to tackle Woods in the backfield on third down. Buccaneers get the ball back at their 13-yard line, 1:24 remaining in the third quarter.

10:20 p.m. — Buccaneers go three-and-out.  Really tough start for Tampa Bay’s offense in the second half. Rams get the ball back at their 20-yard line, 4:41 left in the third quarter.

10:07 p.m. — INTERCEPTION.  This time LA’s defense comes up with the big play as Brady overthrows his man and Jordan Fuller comes up with the easy INT. Rams take over at the Tampa Bay 37-yard line, 7:42 left in the third quarter.

9:52 p.m. — INTERCEPTION.  Goff is rushed on the screen pass and Jason Pierre-Paul cuts it off for the pick. Buccaneers take over at the Rams’ 22-yard line, 13:32 left in the third quarter.

9:29 p.m. — Buccaneers punt.  Brady can’t connect with Chris Godwin on third down and the Rams will get the ball back at their 19-yard line with 1:00 remaining. They have two timeouts to spare.

9:07 p.m. — TOUCHDOWN, BUCCANEERS.  Leondard Fournette punches it in from 2 yards out and Tampa Bay takes a 14-7 lead with 8:35 remaining in the second quarter.

8:34 p.m. — TOUCHDOWN, RAMS.  Jared Goff finds Robert Woods on third and goal for a 4-yard TD and LA leads 7-0 with 3:55 remaining in the first quarter. Nice opening possession for the Rams.

8:21 p.m. — Buccaneers punt.  Brady can’t quite connect with Mike Evans. A touchback gives the Rams the ball at their 20-yard line for their first possession, 11:47 left in the first quarter.

8:15 p.m. — Rams win the toss.  They defer to the second half, so Tom Brady will lead the Buccaneers out for the opening drive.