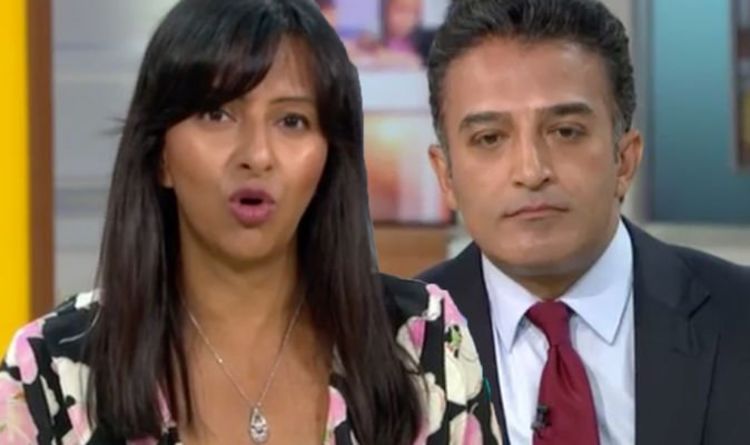 Ranvir Singh and Adil Ray returned to Good Morning Britain today as the pair discussed the morning’s news headlines. Today’s show included a segment on British national Jagtar Singh Johal who is currently being detained in India. However, when Ranvir introduced Jagtar’s story, the GMB host had to apologise when a technical blunder meant the wrong video was shown to viewers.

The GMB presenters returned from an ad break and announced what would be coming up next in the ITV show.

Adil said: “It’s now over three years since British national Jagtar Singh Johal was arrested and detained by police in India as he shopped with his new wife.

“His family say they are desperately worried as they claim British consulate staff haven’t spoken to him since March.”

“Jaguar’s still awaiting trial with no charges yet being made against him. The family say that,” Ranvir continued.

“It’s almost been 1000 days since this all began, we’ll speak to a couple of people involved in Jagtar’s story in a moment.”

However, instead of a video detailing Jagtar’s story, footage of people walking around shops with face masks on was shown.

The voiceover could be heard saying: “We should all be doing [wearing masks] but the rules on covering up have been confusing.”

She asked: “Prince Harry is a fan. Tell us what happened when you met him. He busted some moves or did he sing to you? I can’t remember what happened.”

“It’s crazy, my daughter was there,” Shaggy revealed. “Her mum said, ‘Everything’s about the Prince, the Prince is coming to Jamaica. Daddy’s going to see the Prince.’

“She was like, ‘I want to see the Prince,’ and when she got there if you look at the picture, she didn’t want to [see him].

“Prince Harry was like, ‘I’ve never met anyone less impressed.’”