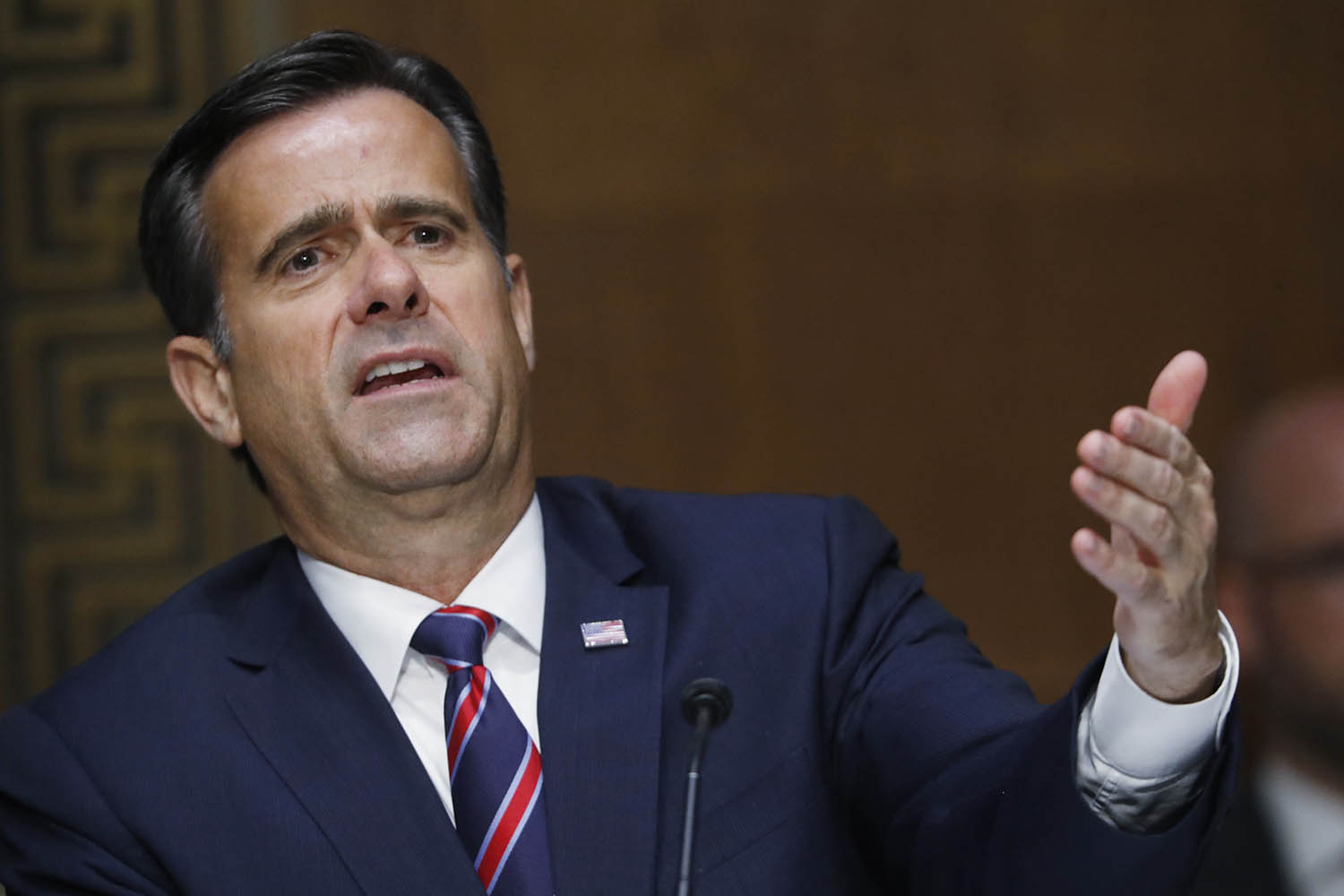 John Ratcliffe was on a mission Tuesday.

Sitting for nearly three hours before the Senate Intelligence Committee, President Donald Trump’s pick to lead the country’s 17 intelligence agencies worked hard to shed his reputation as a partisan Republican and stalwart defender of the president — repeatedly breaking with Trump’s attacks on the U.S. intelligence community as he sought to ease his path to Senate confirmation.

Under intense and sometimes combative questioning during his confirmation hearing, the Texas congressman vowed to be an independent voice and said senators shouldn’t dwell on the past.

“I want to look forward, not back,” said Ratcliffe, who made a name for himself as a member of the president’s impeachment defense team.

Still, senators grilled Ratcliffe about previous statements that seemed to echo the president’s charges about a “deep state” trying to undermine his agenda, with Democrats seeking to portray him as a partisan warrior. His responses to their questions at times ran counter to his previous posture as a fiery defender of the president against former special counsel Robert Mueller’s investigation and the House’s impeachment inquiry.

But Ratcliffe repeatedly pledged to separate politics from intelligence work, stressing that the job of a congressman and the job as the nation’s top intelligence official are different. Ratcliffe, Trump’s nominee to serve as the director of national intelligence, pledged to provide the president and members of Congress with “timely, accurate and objective intelligence.”

“Let me be very clear: Regardless of what anyone wants our intelligence to reflect, the intelligence I provide, if confirmed, will not be impacted or altered as a result of outside influence,” Ratcliffe said, adding that he would provide intelligence briefings to the president even if he knew Trump would disagree with the conclusions, or if he believed his job were at risk for doing so.

Ratcliffe also said he never discussed “loyalty” with the president before he was picked. When asked to name an instance in which he broke with Trump, Ratcliffe named the president’s initial decision to withdraw U.S. troops from Syria.

Tuesday’s confirmation hearing comes amid an unprecedented global health crisis and ahead of the 2020 presidential election, which national security officials have long warned will be a prime target for interference from foreign adversaries like Russia. Senators in particular focused on Moscow’s election interference, in addition to the origins of the coronavirus pandemic.

Ratcliffe has relatively little experience working in the intelligence field, though he has served on the House Intelligence Committee for more than a year.

Trump initially chose him for the DNI post last year, but Ratcliffe withdrew from consideration just days later amid questions about whether he embellished aspects of his resume from his time as a U.S. attorney in Texas. He was first elected to the House in 2014.

Ratcliffe can be confirmed with a simple majority, and this time around, no Republicans have signaled opposition. After the hearing, Intelligence Committee Chairman Richard Burr (R-N.C.) praised Ratcliffe and said he hoped to send the nomination to the Senate floor as soon as next week.

“He answered everything, and I think he did a very successful job at one, verifying that he’s more than capable of this job, and two will serve in an independent capacity,” Burr told reporters.

In addition to Ratcliffe’s qualifications, the hearing focused extensively on the committee’s recent conclusions about Russia’s interference in the 2016 election — namely, that the Kremlin’s malign activities were carried out with the intention of boosting Trump’s candidacy.

That conclusion contradicts the House intelligence panel’s 2018 report which disputed the intelligence community’s 2017 assessment that Moscow interfered with the goal of helping Trump. The president himself has also rejected that view.

Ratcliffe during Tuesday’s hearing said he had no reason to dispute either committee’s conclusion, but said he has not yet seen “the underlying intelligence to tell me why there is a difference of opinion between the two committees.” He also pledged that he would not dismantle the intelligence community’s election security unit ahead of the 2020 presidential election, and said Russian President Vladimir Putin is “a very bad actor.”

Ratcliffe gained national prominence last year during the House’s hearing with Mueller, in addition to the impeachment hearings. Ratcliffe endeared himself to the president after grilling Mueller on a host of issues, and he continued that streak during the impeachment investigation, using his perch on the Intelligence and Judiciary committees to fiercely defend the president against Democrats’ charges of abuse of power and obstruction of Congress.

Ratcliffe later faced tough questions about his views on whistleblowers, given his criticisms of the official whose whistleblower complaint about the president’s conduct toward Ukraine sparked the impeachment inquiry last year.

“I don’t want to re-litigate old issues of what happened with the impeachment inquiry,” Ratcliffe said under questioning from Sen. Dianne Feinstein (D-Calif.).

The whistleblower complaint was handled with a “lack of due process” during the House’s impeachment inquiry, Ratcliffe said, adding that he did not personally have an issue with the unnamed whistleblower’s actions. But Ratcliffe repeatedly slammed the whistleblower during the impeachment hearings, even implying that the individual lied about Trump’s conversation with Ukrainian President Volodymyr Zelensky.

Ratcliffe said he does not have enough information to assess whether Trump acted appropriately when he fired Michael Atkinson, the intelligence community’s inspector general and the official who transmitted the Ukraine whistleblower complaint to the congressional intelligence committees. But he said he has “no issues” with Atkinson based on his experience with him, adding: “I think he did what he thought was right.”

Later in the hearing, the Texas Republican pledged to be “laser-focused” on the origins of the novel coronavirus.

Last week, the Office of the Director of National Intelligence took the unusual step of issuing a public statement acknowledging that the clandestine community continues to “rigorously examine” whether the outbreak “began through contact with infected animals or if it was the result of an accident at a laboratory in Wuhan,” the city in China where the virus was initially identified.

Trump undercut that statement hours later when he claimed he had seen evidence that gave him a “high degree of confidence” that the coronavirus originated from the lab, though he declined to offer details.

If he is confirmed to the post, Ratcliffe would replace another Trump ally, Richard Grenell, atop the nation’s intelligence apparatus. Grenell has drawn the ire of congressional Democrats over his fiery personality and his reputation as a GOP political operative.

“Some have suggested that your main qualification for confirmation to this post is that you are not Ambassador Grenell,” Senate Intelligence Committee Vice Chairman Mark Warner (D-Va.) said. “But frankly, that is not enough.”

Trump appointed Grenell in an acting capacity after forcing out the previous acting director, Joseph Maguire, after learning that Maguire had authorized congressional briefings on Russia’s efforts to interfere in the 2020 campaign.

Republican senators have been eager to install a permanent nominee to lead the intelligence community, and several of them have commented favorably about Ratcliffe’s qualifications.

“[U.S. intelligence officials] deserve, and the country needs, the certainty of a permanent, Senate-confirmed director of national intelligence,” Burr said.

And Sen. Roy Blunt (R-Mo.), a member of Senate GOP leadership, lamented that the post “has gone vacant for too long.”

US election 2020: Trump and Biden feud over debate topics

Why Are Native Americans Particularly Vulnerable To COVID-19?