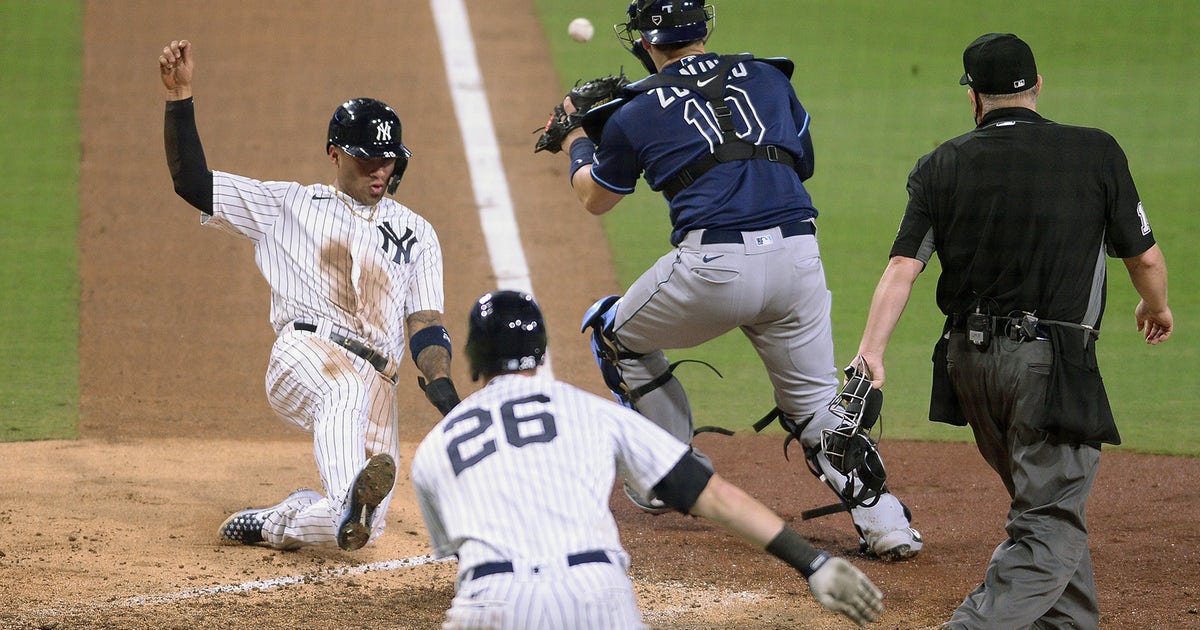 SAN DIEGO (AP) — The New York Yankees didn’t flinch under the pressure of an elimination game and got the AL Division Series against Tampa Bay into the hands of ace Gerrit Cole for the decisive Game 5.

Luke Voit and Gleyber Torres hit impressive home runs, Jordan Montgomery and three relievers were brilliant in combining on a three-hitter and the Yankees beat the Rays 5-1 Thursday night to even the best-of-5 series at 2-2.

The Yankees bounced back from consecutive losses against their AL East rivals to set up a showdown between Cole and Tyler Glasnow on Friday night.

Asked the Yankees mentality for Game 5, Voit said, “We’re going to win it.”

And with Cole on the mound, “We’re locked and loaded,” Voit said.

Cole, backed by four home runs, won 9-3 in the series opener Monday and will be pitching on short rest for the first time in his big league career. Yankees manager Aaron Boone said the decision was made when Cole walked past his of office Thursday and made eye contact.

“Just give me the ball,” the manager said his ace replied.

Cole will be pitching about 100 miles south of where he grew up a Yankees fan in Newport Beach.

“I think everybody’s feeling like it’s going to be a special game,” said Cole, who pitched at UCLA before beginning his big league career with Pittsburgh. “It’s not going to take one guy to win it, it’s going to have to be a complete team game, much like most of our wins are. Anytime you’re in the lineup in a do-or-die game, your manager has faith in you. As a player it’s always a good feeling and you always want to be out there in the big moment.

“We’re here and it’s part of the path to get to where we ultimately want to get to,” added Cole, who left the Houston Astros in the offseason and joined the Yankees on a $ 324 million, nine-year contract.

Tyler Glasnow will be starting on two days’ rest after throwing 93 pitches over five innings and striking out 10 in winning Game 2.

It’s a rematch of last year’s ALDS Game 5 between Houston and Tampa Bay. Cole pitched eight innings of one-run ball for the Astros in a 5-1 victory. Glasnow was pulled after eight outs and four runs.

“We’ve seen him,” Tampa Bay manager Kevin Cash said. “I think we know him a little bit better now. We know he’s a talented pitcher, and he’ll be dialed up I would anticipate just like he is on regular rest. We’ve got to come out and have good at-bats against him just like we have in the past.”

Voit speculated Glasnow would be used as an opener and be followed by Game 1 starter Blake Snell.

The Game 5 winner will remain in San Diego to face the Houston Astros in the AL Championship Series starting Sunday night.

Wearing their home pinstripes for a second straight night at neutral site Petco Park, the Yankees lived up to their Bronx Bombers nickname.

Voit, who led the majors with 22 homers in the pandemic-shortened season, led off the second by driving a 1-0 pitch from Rays opener Ryan Thompson into the second deck in left field for his first career postseason shot.

“We’re like caged animals,“Voit said when asked when the Yankees seem to perform best under pressure this year.

“There was certainly an edge to them right before the game, right before we were ready to take the field, and I thought everyone came up big tonight,” Boone said.

Torres one-upped his teammate when he deposited a two-run homer onto the balcony on the fourth floor of the Western Metal Supply Co. brick warehouse in the left-field corner, the centerpiece of the downtown ballpark. That came on the first pitch he saw from Ryan Yarbrough and put the Yankees ahead 4-1 with one out in the sixth. In his previous at-bat, Torres fouled a ball off his calf.

It was Torres’ first this postseason and fifth of his career, tying Mickey Mantle for the most playoff homers for a Yankees player 23 or younger.

The only younger Yankees player to homer while facing postseason elimination was 20-year-old Mantle, in both Games 6 and 7 of the 1952 World Series against the Brooklyn Dodgers.

“We were really confident tonight,” Torres said. “We never feel panic or anything like that. We just come to the plate and try to do what we can do. Inning after inning, we feel more comfortable. That’s the way the whole team wants to feel. And we believed in our bullpen all night long, so we feel great for that.”

Torres’ homer was the 18th of the series, with each team hitting nine.

New York kept Randy Arozarena in the ballpark after the 25-year-old Cuban homered in each of the first three games. Likewise, the Rays ended Giancarlo Stanton’s franchise-record run of homering in five straight games but he did double. Stanton hit four homers in the first three games of this series and had six total in the first five postseason games.

Chad Green, Zack Britton and Aroldis Chapman combined for five hitless innings of relief, retiring 15 of the last 16 batters. Green pitched two perfect innings for the win, and Chapman got four outs for his first save of this postseason. He struck out Arozarena on a 101 mph sinker to end the eighth.

Montgomery went four innings in his first appearance since Sept. 24, holding the Rays to one run and three hits while striking out four and walking three. He struck out Arozarena in the first and retired the breakout star on a grounder in the fourth.

Tampa Bay loaded the bases in the third but got just one run, on Brandon Lowe’s fielder’s choice.

It was a much better start than Montgomery had against the Rays at Yankee Stadium on Sept. 2, when he was pulled after allowing four runs and five hits on 39 pitches, and getting only two outs.

Thompson took the loss. He was chased after allowing DJ LeMahieu’s sacrifice fly for the second out of the second.

Montgomery gave the Yankees exactly what they needed.

“It was a big-time outing. We just needed him to give us just a little bit,” Boone said. “He did a great job setting the tone for us, giving us just what we needed to allow us to turn it over to the back end.”

Kyle Higashioka went 2 for 4 with an eighth-inning RBI single in place of slumping catcher Gary Sánchez, who was benched for the third time in four games. Higashioka will start again Friday to catch Cole.

Yankees: Cole is 2-0 in the postseason. The Yankees will be the visiting team.