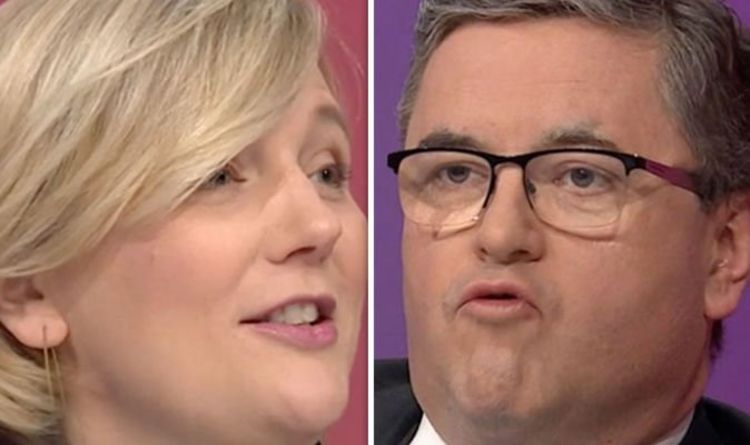 Robert Buckland, Secretary of State for Justice, and Stella Creasy, MP for Walthamstow, London, argued over Trump and whether the UK was right in its decision to strike such a close relationship with the leader. It came as audience members asked the panel about the significance of Trump’s recent impeachment acquittal, and what it might mean for the UK going forward.

Mr Buckland said: “Trump has confounded the rules of politics.

“I’ll admit, I’m quite a conventional sort of person in the way I do my politics.

“Some people might find Trump’s politics difficult and challenging.

“But, elections are elections, we have to work with whoever is democratically elected in the White House.”

To this, Ms Creasy looked perplexed and asked: “Difficult and challenging, Robert?

“He nearly caused World War 3 with Iran, that’s not difficult and challenging.

“He abused his office of state to be able to pick on a political rival.

JUST IN: Kirk Douglas: The last of the Hollywood legends

Ms Creasy replied: “And yet you rolled out the red carpet for him to come to this country because we’re weak in the world right now rather than strong to be able to stand up to him and tell him when he’s got things wrong.

“We’re all demeaned by it as a result.”

Ms Creasy’s comments were in reference to Trump’s state visit to the UK last June.

While there, Trump was treated royally, meeting with the Queen, and the then Prime Minister, Theresa May, as well as countless other royal and senior political figures.

Thousands rallied and protested the president’s visit, most notably gathering at Trafalgar Square.

It was here that Labour leader, Jeremy Corbyn, addressed crowds, also being joined by members of other political parties including the Liberal Democrats and the Greens.

It wasn’t the only time on yesterday evening’s Question Time that Trump cropped up in conversation.

Just before the bitter exchange between the Labour and Tory politician, Mr Buckland was pushed to make a funny parallel between Boris Johnson and Trump.

ByOne Twitter used posted "the really stupid thing is that a county line goes through the middle of a village", while Robert Rees tweeted...
Read more
U.K.

ByTory MPs have voiced their concern over the tier system and have even stated they will not support the measures when it is voted...
Read more