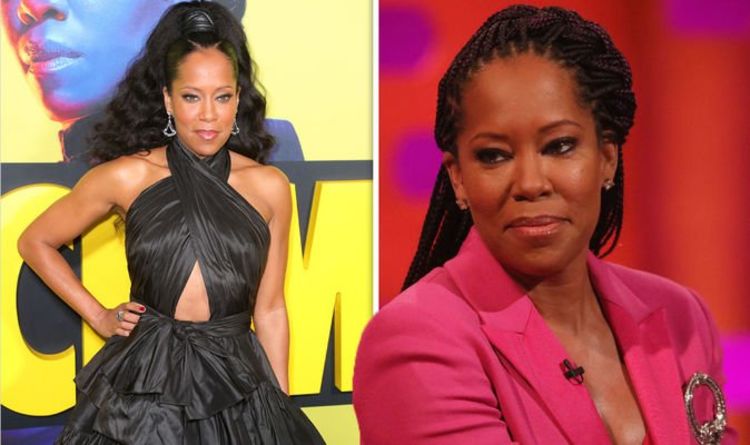 Regina King, 48, appeared on The Graham Norton Show this week, with the instalment set to air tonight, and opened up about being typecast after getting her big break playing Cuba Gooding Jr.’s character’s wife, Marcee Tidwell, in Jerry Maguire.

King, who is starring in upcoming TV series Watchmen, told host Norton she found herself being pigeonholed following her appearance in the 1996 rom com.

However, she revealed it eventually prompted her to “shift” in her career.

“When you get a call asking you to play Samuel L Jackson’s [70] wife you think, ‘Surely you meant daughter or mistress?’” she quipped.

“I love Sam, but that told me it was time to shift.”

Meanwhile, King also went on to speak about her role as Angela Abar in the TV adaptation of Watchmen.

Calling her character a “complete bada**”, she revealed how she coped with the stunt work.

“I’ll do some of them [stunts] but I have a stunt double to do all the hard stuff because I am not landing on the ground!

“I do sometimes wish that the double could come in to do some of there sex scenes,” she added. “That would be awesome.”

King began her acting career in the 1980s but was launched to fame by Jerry Maguire.

Since then, she has appeared in the likes of 24, Ray, Enemy of the State and Miss Congeniality 2.

Last year, she won an Oscar for her incredible performance as Sharon Rivers in Barry Jenkins’ If Beale Street Could Talk.

On The Graham Norton Show, she recalled receiving the award: “They gave me a little talk about what to do but all of it is such a blur in so many ways.

“It still feels surreal but I felt so much love in that room.

“Once you’ve won, the pressure is off. And they do have a bar!” she added.

Elsewhere, King recently revealed how Watchmen creator Damon Lindelof urged her to avoid both the comic and movie to distance herself from the series’ events like her character in the show.

“He made it clear, while shooting the pilot, that he didn’t want me to watch the movie or read the book,” she told Digital Spy. “Because my character is not in the graphic novel. And he wanted me to experience the character just like a real person would have.

“You would only know about that reading about it, or through someone telling you the history of your country or your city or whatever,” she continued.

“So, we wanted to receive it in that way. So I honoured his wishes.”

The Graham Norton Show airs tonight at 10.35pm on BBC One.