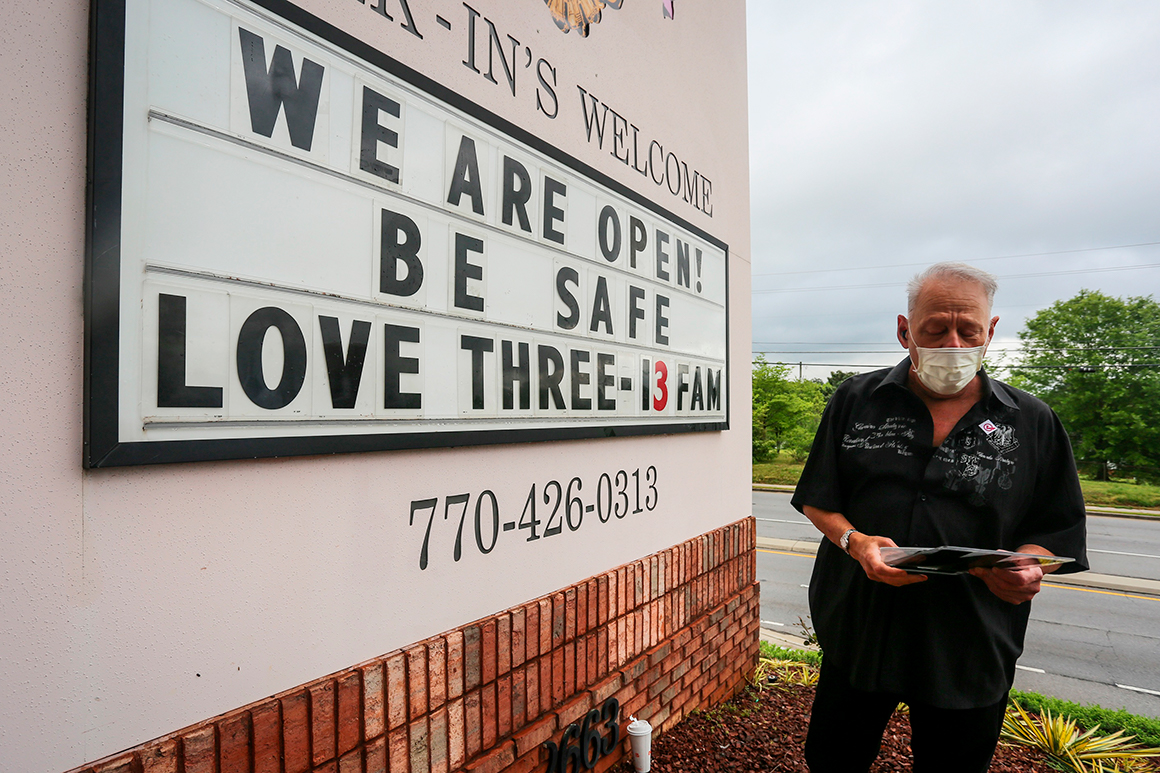 There are many reasons Georgia’s jobless numbers are still going up, economists say, including that the state, like most of the country, is still whittling through a backlog of applications. State officials also say some laid-off workers are filing duplicate claims, which can artificially inflate the numbers. But the data still underscores how lifting stay-at-home restrictions alone will do little to bring jobs and spending back unless consumer confidence improves, bringing demand with it.

“Think of a restaurant: They’re not going to be able to bring back their entire staff because they’re just not going to have the clientele,” said Laura Wheeler, associate director of the Center for State and Local Finance at Georgia State University. “That’s going to hinder the return of the workforce, because while we’re going to open up, we’re not going to open up to the full capacity that we were at before.”

And in Georgia, public polling indicates that confidence has yet to return. Nearly two-thirds of Georgia residents in a recent Washington Post-Ipsos poll said they felt their state was lifting restrictions too quickly, and only 39 percent said they approved of Kemp’s handling of the outbreak.

“We’ve been chasing a bit of a false narrative that the economic hit is about the restrictions and not the disease itself,” said Julia Coronado, president and founder of Macropolicy Perspectives, an economic research consulting firm. “The economic story really isn’t about lockdowns, and we’re going to make mistakes by pursuing that narrative. It really is about the disease, and how fearful people are about getting sick, and how businesses are going to operate in a world where this virus is with us.”

At the same time, the Trump administration is pushing to get governors to reopen their doors in the hopes that doing so will help revive the U.S. economy.

Trump has amplified calls to “liberate” states and criticized governors he feels are moving too cautiously, often accusing Democratic leaders of playing politics. “You have areas of Pennsylvania that are barely affected, and they want to keep them closed,” he said during a visit to the state last week, a hit to Democratic Gov. Tom Wolf. “Can’t do that.”

At the same time, The White House is also closely watching state-level claims data and expects reopening to have a major effect, Kevin Hassett, a senior economic adviser to the president, said late last week. “My fear is that the places that stay closed could have sort of skyrocketing claims,” Hassett told reporters at the White House, adding: “The places that are turning on could actually see claims go way back down towards normal.”

But many economists dispute the idea that lifting restrictions will by itself mean a major boost to the labor market, in part because of evidence that layoffs accelerated in March separate from governors’ shutdown restrictions. A recent analysis by four University of California-Berkeley researchers found that the direct effect of stay-at-home orders accounted for only one-quarter of the jobless claims at the start of the crisis — suggesting that a majority of jobs that have been erased would have been lost even without statewide shutdowns.

A drop-off in consumer demand, disruptions to global supply chains and self-imposed social distancing measures all exacerbated the job losses and will likely continue to hinder the economic recovery after shutdown restrictions are removed.

POLITICO compared nine weeks of non-seasonally-adjusted initial jobless claims to Georgia’s non-adjusted residential employment from February to determine the state’s jobless claims rate of 40.3 percent, which is currently the highest in the country.

Get the latest on employment and immigration, every weekday morning — in your inbox.

It’s too early to know exactly why Georgia leads in terms of the proportion of its workforce filing for claims, economists say, and other states may well pass it in the coming weeks as they continue to process additional applications. The state did change its criteria early on to require employers to file unemployment claims on behalf of their employees in many situations, a move that supporters say simplifies the process and allows for quicker payouts. The state also now allows workers to earn as much as $ 300 each week without having their unemployment eligibility affected.

Others speculated that Georgia might employ more workers in industries like hospitality and healthcare that have been deeply affected, or that many residents are employed by small businesses that have struggled to survive during the pandemic.

But no matter the reasons, experts say the data offers an early indication of why millions of jobs across the country that were erased in mere weeks could take years to return.

“Reopening is certainly not a lights-on, lights-off situation,” said Andrew Stettner, a senior fellow at the Century Foundation, a progressive think tank. “These are companies that have seen a shock in their demand, and at a certain point, they can’t keep their workers on.”