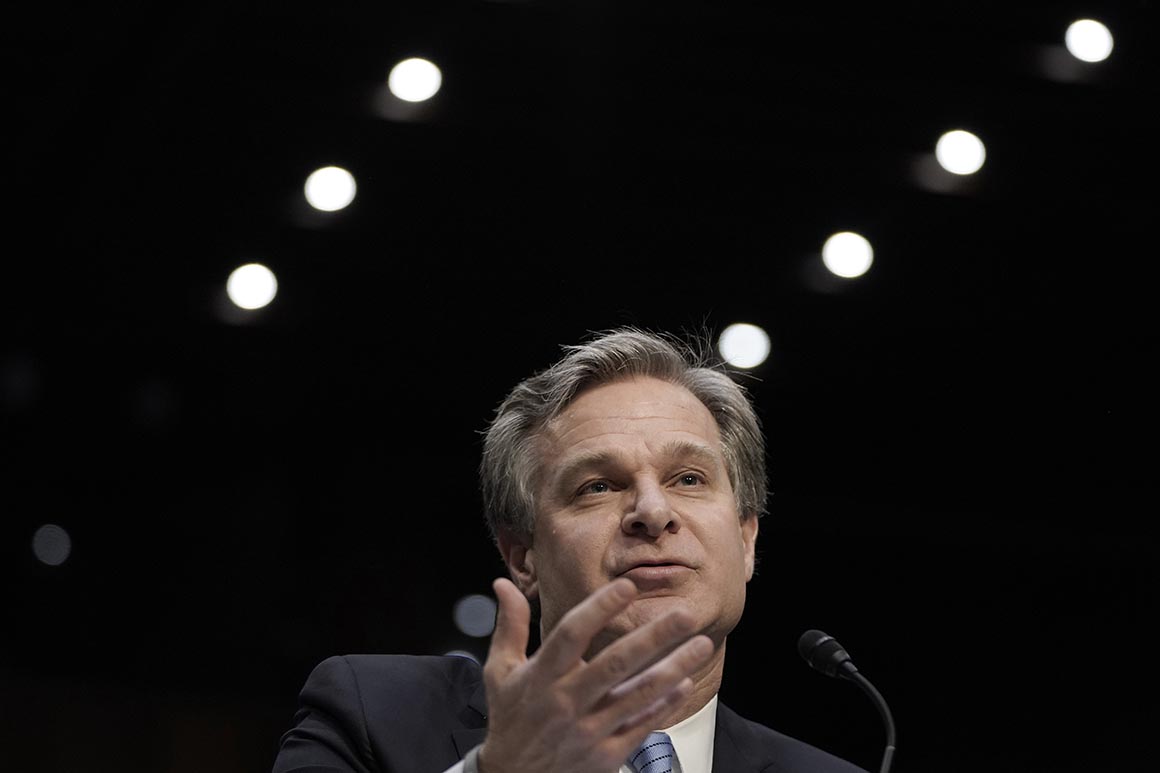 Senate Republicans are beginning to sour on Christopher Wray.

They’re not ready to push for the FBI director’s firing as some of President Donald Trump’s most fervent allies have demanded, but they’re looking for speedier action on Trump’s desires to “clean up” the Justice Department.

“I’m not calling on [Trump] to make a change, but I think the FBI needs to show more energy in terms of solving some of these internal problems,” Senate Judiciary Committee Chairman Lindsey Graham (R-S.C.) said in a brief interview. “They need to up their game.”

Graham, a close Trump ally, made his comments before DOJ’s stunning reversal Thursday to drop the criminal case against former national security adviser Michael Flynn, who twice pleaded guilty to lying to the FBI about his contacts with Russia’s then-ambassador to the U.S.

And Flynn’s newfound freedom from legal jeopardy could deliver Wray some breathing room.

The harshest attacks have come from conservative media figures close to Trump, who accused Wray of covering up evidence that would exonerate Flynn. In recent days, the Justice Department released documents including a handwritten note that Flynn’s allies suggested was proof that the government was trying to trick him into lying. Another showed that the FBI initially intended to drop its investigation into Flynn well before the January 2017 interview. 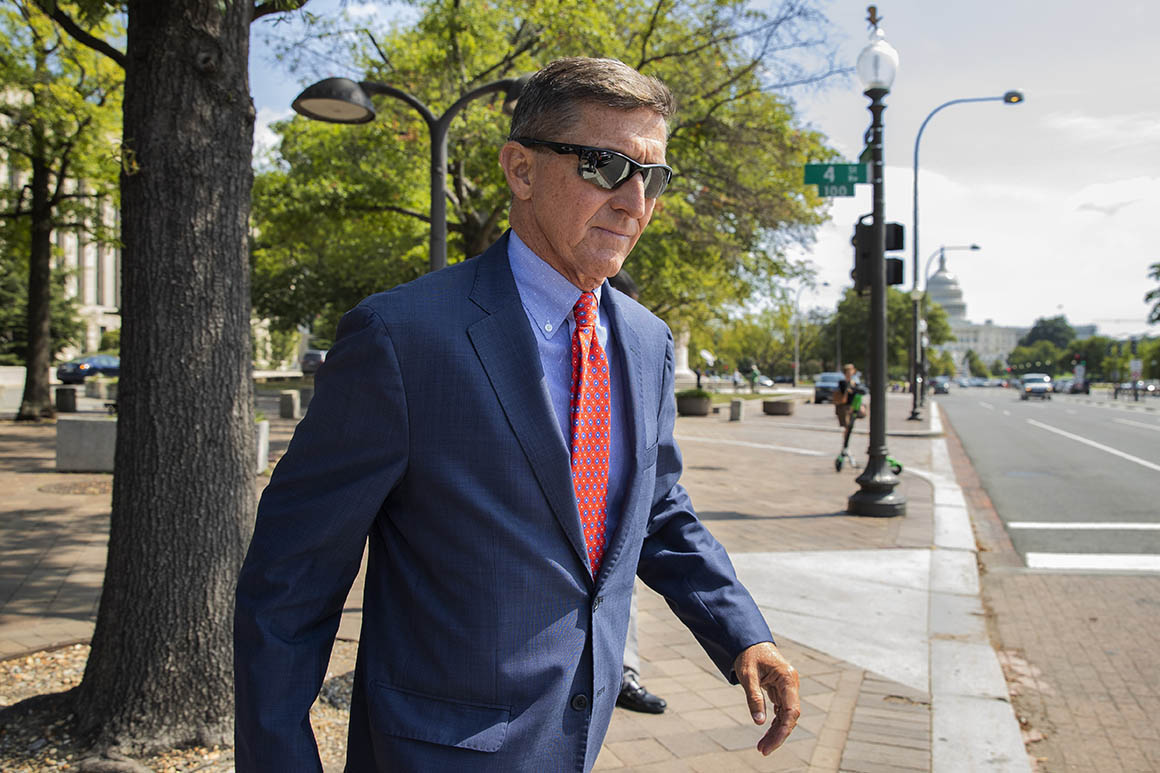 In court documents explaining its decision to drop the case, the Justice Department cited “a considered review of all the facts and circumstances of this case, including newly discovered and disclosed information.”

But even apart from the Flynn saga, a series of interviews with GOP senators underscored the frustration with the FBI’s broader handling of the Russia investigation and the agency’s responsiveness to their oversight requests.

Still, they also want Wray to stay put for now — with many of them privately saying they want no part of a tough confirmation fight to replace him in an election year. Most importantly, they say, many of the alleged abuses in the Russia investigation occurred well before Wray’s tenure.

Grassley suggested that Wray’s job status will depend on whether he takes punitive measures against FBI officials who allegedly behaved improperly.

“I expect very dramatic action that proves that they know something was badly wrong over the last five or six years,” Grassley said. “And around this town, the only thing that you send a signal is one of two things: either somebody gets fired or they get prosecuted.”

Flynn’s case has been a rallying cry for conservatives and allies of the president who believe that the Justice Department was weaponized against Trump and has consistently sought to undermine him and his associates.

And in the days leading up to the decision to drop the case against Flynn, several of Trump’s most vocal boosters in the conservative media world were unrelenting in their criticisms of Wray, arguing that the Flynn revelations reflect a pattern of abuse that the current FBI leadership has failed to address. They also whacked Wray for not turning over the Flynn documents sooner.

Allies of Senate Majority Leader Mitch McConnell praised Wray, in a sign he still has some strong backing on the Hill. Sen. John Cornyn (R-Texas) said Wray is “the right man to clean up what was broken at the FBI.” And Senate Majority Whip John Thune (R-S.D.) called Wray “very capable.” 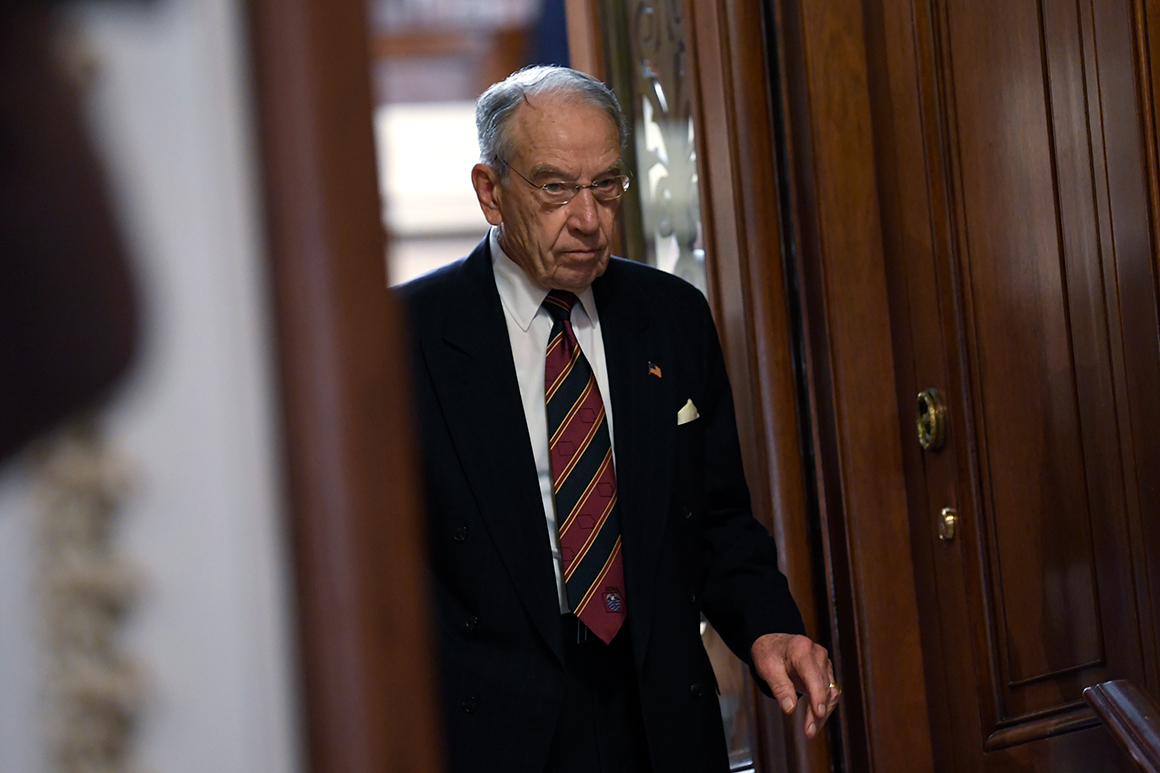 But other Republicans said they aren’t satisfied with Wray’s progress so far.

“I’m highly concerned about his lack of, really, reform within the FBI and certainly not turning over the type of documents I think he should’ve turned over to Congress a long time ago,” Senate Homeland Security Committee Chairman Ron Johnson (R-Wis.) said. “So I’m very disappointed in his performance.”

“There are a lot of questions that have to be asked on exactly where in the hierarchy of the FBI the buck stops,” Sen. Thom Tillis (R-N.C.), a member of the Judiciary Committee, warned. “So I’ve not formed a formal opinion, but I think there are some questions, based on the answers, that could lead me in that direction.”

Some of the president’s closest allies want Wray to hold accountable officials whom they believe treated Trump and his presidential campaign unfairly in 2016.

“I’ll reserve judgment on whether he ought to be fired, but I think he needs to do more to get rid of the people who perpetrated this on the president,” said Sen. Rand Paul (R-Ky.).

The Senate overwhelmingly confirmed Wray to lead the agency by a vote of 92 to 5, with all Republicans voting in favor. But many of those same Republicans have grown concerned that Wray is not being transparent with Congress, specifically on how the FBI is implementing reforms in the aftermath of a blistering inspector general report that found widespread abuses of the surveillance courts.

“I think he’s been a little derelict in not being more accommodating to help get to the bottom of what many of us are concerned with,” Sen. Mike Braun (R-Ind.) said. “I think he needs to be more energetic and more responsive. And I think if he’s not, there’s going to be increasing pressure for him to maybe move on down the road. I wouldn’t be calling for it myself. But I think he puts himself in a spot where he’s vulnerable.”

Trump himself is growing increasingly frustrated with Wray, but he has said privately that he does not want to be accused of having a constitutional crisis on his hands, and is letting Attorney General William Barr take the lead on handling Wray, according to a person close to the White House.

Trump has “never liked Wray,” the person said, adding that “keeping his job isn’t in the cards for him.”

In an interview last Friday with conservative commentator Dan Bongino, the president said that what Flynn faced was “a disgrace,” adding: “one way or the other he’s innocent.” Trump did not answer questions about the fate of the FBI director and whether he should be trusted to enact reforms.

Instead, the president praised Barr and said he is looking into the matter.

“I’ll tell you what, you’re going to see what a good job he’s doing,” Trump said. “I don’t get involved, I say Bill, you have to do what’s right. I can get involved in theory — I am the chief law enforcement, but I think it’s better if I don’t.”

The president has rarely voiced his concerns with Wray publicly. But last year, he lashed out at Wray after the FBI director backed up the Justice Department inspector general’s conclusion that the FBI’s Russia probe was appropriately launched. At the time, Senate Republicans raced to defend Wray from the president’s attacks.

Wray’s penchant to sometimes buck the president has rubbed Trump’s allies the wrong way, in particular when it comes to election interference and the origins of the Russia investigation.

“I think his attitude, his very dismissive attitude, when he’s been up before the Judiciary Committee addressing that situation is of deep concern to me,” said Sen. Josh Hawley (R-Mo.), a member of that panel. “So I would just say that I have a lot of concerns.”

The FBI seemed to acknowledge the pressure Wray is under earlier this week when an agency spokesman released a rare statement seeking to distance Wray from the Flynn controversy, placing the blame on “prior FBI leadership.”

“Director Wray remains firmly committed to addressing the failures under prior FBI leadership while maintaining the foundational principles of rigor, objectivity, accountability, and ownership in fulfilling the Bureau’s mission to protect the American people and defend the Constitution,” the spokesman said.

House Republicans have gone even further than their counterparts in the Senate. Ohio Rep. Jim Jordan, the top Republican on the House Judiciary Committee, sent a letter to Wray earlier this week in which he suggested that the FBI director was shielding the agency’s alleged misconduct in the Flynn case.

“Even more concerning, we continue to learn these new details from litigation and investigations — not from you,” Jordan wrote. “It is well past time that you show the leadership necessary to bring the FBI past the abuses of the Obama-Biden era.”

Meridith McGraw contributed to this report.