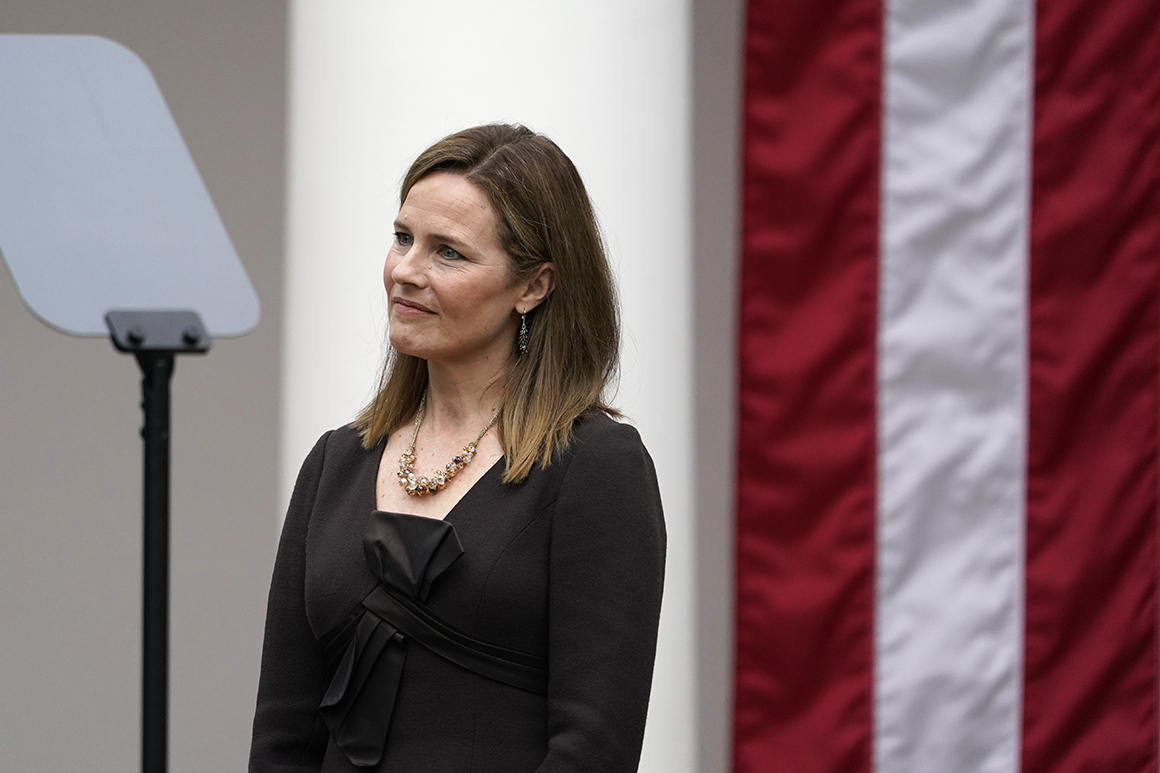 Certainly, things can change — especially with a narrow 53-seat GOP majority, two Republicans already opposed to filling the seat before the election and Democrats in lockstep opposition. So on Saturday Republicans were emphasizing the strength of their whip count as much as possible.

“We’ve coalesced very quickly behind her nomination. And if things go along smoothly, then I’m looking forward to a vote before the election,” Sen. John Barrasso (R-Wyo.), the No. 3 GOP leader, said in an interview.

Vulnerable GOP incumbents instantly backed her, with Sen. Thom Tillis (R-N.C.) asking supporters to stand with him in support of Barrett and Sen. Kelly Loeffler (R-Ga.) vowing that “we will confirm you.” While some Republicans left at least the pretense that they would first study her credentials before coming to a position, many others did not. Sens. Marco Rubio (R-Fla.) and Tom Cotton (R-Ark.), both potential future GOP presidential contenders, instantly said that they will vote for Barrett.

Sen. Susan Collins (R-Maine) has said she will vote no; Sen. Lisa Murkowski (R-Alaska) has been less explicit but says she is opposed to a pre-election confirmation. Both have said they will meet with Barrett. But besides them, there’s little sign of any GOP opposition building.

Pressed by reporters after the announcement, White House chief of staff Mark Meadows was deferential to senators when asked if the Republicans had the votes to confirm Barrett before Election Day: “I’m not counting the votes.”

Republicans point to several factors in explaining the remarkable result of having built near-unanimous support for Barrett before she was even officially nominated. They note she was already vetted once for a different Supreme Court vacancy in 2018. Senators were also essentially forced to decide whether they’d be open to Trump’s pick from the outset after Ginsburg’s sudden death, and support for considering a confirmation before the election is seen as being supportive of a conservative judge like Barrett.

And Republicans say that despite just three years as a Circuit Court judge, Barrett’s opinions are predictably conservative — satisfying Republicans who think some GOP appointees to the Supreme Court have gone wobbly.

“That drift occurs in some ways with some that come in having conservative credentials,” said Sen. Mike Braun (R-Ind.), who advocated strongly for Barrett’s nomination. “She looks like she will not change her point of view. She’ll be consistent with her opinions of the past, and sadly that’s not been the case for a number of so-called conservatives when they got to the court.”

Democrats were just as quick in announcing their opposition. From Sen. Joe Manchin (D-W.Va.) all the way to the far left of the party, the answer was the same.

“I will vote against confirming Judge Amy Coney Barrett,” said Sen. Gary Peters (D-Mich.), who is up for re-election this fall in a state Trump won in 2016.

“Judge Barrett was not fit to be a Circuit Judge in 2017 and she is the wrong choice for a lifetime appointment to the Supreme Court today,” said Sen. Tammy Duckworth (D-Ill.). “Once again, she will not have my support.”

Schumer told reporters in New York that the more the public learns about Barrett, the more unpopular she will become. Democrats hope that pressure will lead to a delay. But if not, Schumer’s caucus is likely to put up 47 no votes.

“My colleagues are united in opposition,” he said.

Braun said it would require a “flabbergasting” event to rattle GOP support for Barrett in the next month. Republicans expect Democrats to force votes on the Senate floor to try to delay the nomination, but the GOP can win them as long they keep a working majority in town for the next few weeks. But after McConnell and the GOP majority eliminated the filibuster on Supreme Court nominees in 2017, Democrats can’t block Barrett on their own.

“There’s going to be massive pressure on Sen. Schumer as well as [Judiciary Committee ranking member) Dianne Feinstein to do everything they can do to a throw a monkey wrench here,” Barrasso said. “There’s nothing they can do to stop it, There’s lot of different techniques… that they can try to slow it down.”

Things will move incredibly fast. Senate Judiciary Committee members have been notified that hearings for Barrett will begin Oct. 12, according to two people familiar with the schedule. Provided Republicans’ can keep things on track in both committee in the floor, that would mean a floor vote the week before the Nov. 3 election.

The hearings are expected to last four days, similar to other recent confirmations. Opening statements will be on that Monday, first round of questions will be Tuesday, followed by a second round of questions and a closed session on Wednesday. Finally, outside witnesses will present on Thursday.

Trump urged Democrats’ to give Barrett a “dignified” hearing and shun partisan and personal attacks. Given Trump’s own record on that front, it’s a request that may fall on deaf ears in a party that’s outraged McConnell is moving forward at all.

Barrett will begin sitting down with senators next week, though some Democrats have already vowed not to meet with the nominee in a sign of their hostility to the whole affair. And it’s clear which way the wind is blowing in the Democratic Party: Senate Judiciary Committee member Richard Blumenthal (D-Conn.) said earlier this week he’d consider meeting with Trump’s nominee, but by Saturday he’d decided otherwise.

“I refuse to treat this process as legitimate and will not meet with Judge Barrett,” he said.