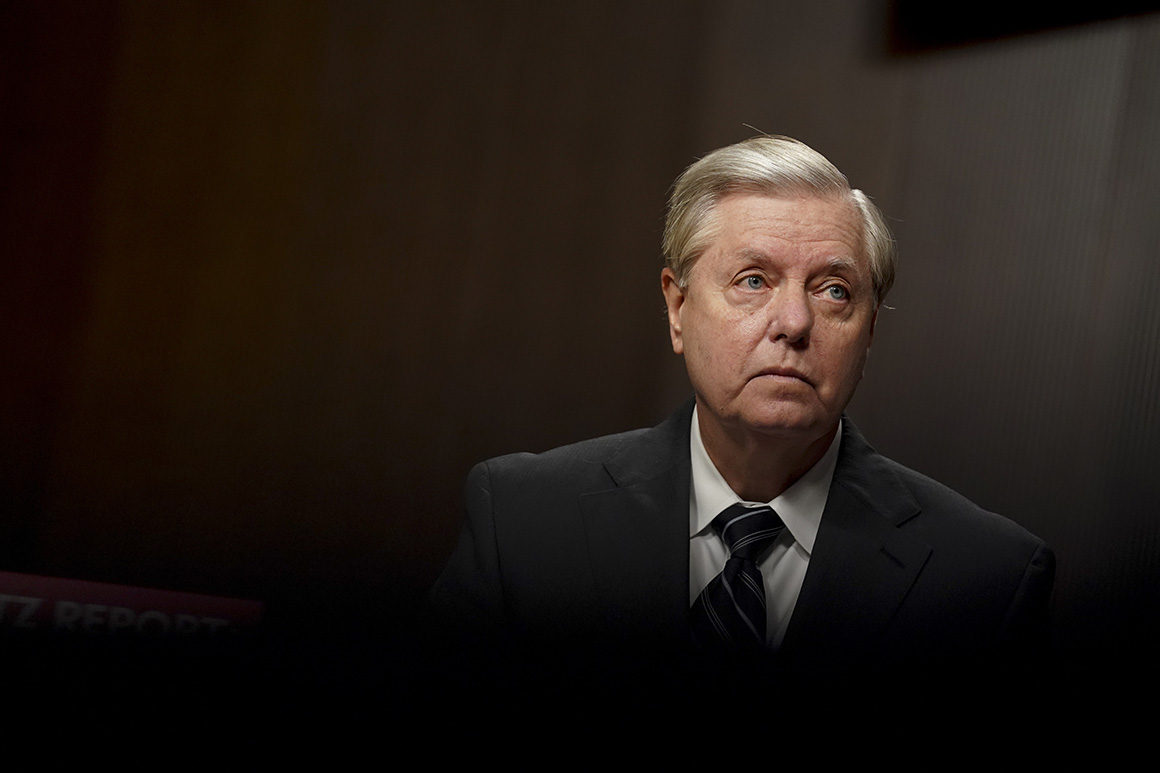 Trump had immediately recognized how the “enemy” could derail the plan. On Friday Graham said that Trump asked him about Barrett and the senator assured him “we’re moving on.”

Finally, Graham was dealing with his own reelection. The South Carolina senator who famously declared in 2015 that Trump was a “complete idiot,” became a Trump loyalist over the last two years in part to fend off GOP primary challengers. It worked. He easily secured his party’s nomination only to be thrust into a competitive general election against a well-financed and gifted Democratic candidate, Jaime Harrison, who has made the race competitive. The two men had debated on Saturday night and Graham was still trying to make sense of how it went.

“Jamie is a smart guy,” Graham said. “He held his own and we’ll see what happens.”

Graham is still favored to win, but the fact that a Democrat is within striking distance of victory in South Carolina underscores how fragile the GOP’s Senate majority is.

As Graham spoke, Trump popped up on a TV screen in a slow-motion video that captured him in the rear seat of a black Suburban, on a ride to thank supporters gathered outside Walter Reed hospital.

“He’s had like five presidencies when you think about it,” Graham said. There was a “reset” after each one. He mentioned the Russia investigation, impeachment, the outbreak of the pandemic, and now Trump’s own infection. Technically, that’s four — one could easily add the recession — but the senator’s point is valid: Cataclysmic news events that might define a presidency come and go in the Trump era and it’s not always clear what will have lasting impact.

Trump’s Republican critics have long argued that he was a virus infecting their party that would eventually destroy it. Trump skeptics-turned-supporters, which could describe most Washington Republicans, made a different calculation: If the worst elements of Trump could be contained, then Republicans could keep a Democrat out of the White House, lock in a majority on the Supreme Court and protect their redoubt in the Senate. Even before Trump’s diagnosis, the cost of the deal with Trump was starting to look high. But the path to pushing through Barrett and retaining the Senate and even White House was hardly insurmountable.

That an actual virus has now infected Trump, his wife, his campaign manager, the head of the RNC, several advisers, and three senators — many of them at a celebration of Barrett’s nomination — thus throwing all three of the GOP’s 2020 goals into chaos, is a plot twist that would be rejected by any writer as just a little too on the nose.

“Trump has done more to derail the Barrett nomination than any Democrat,” said one dejected former senior White House official. “They are screwing themselves, that’s for sure.”

As grim as the exercise might be, Republicans across Washington are trying to game out the politics of the president’s illness. “I don’t know exactly how this plays,” Graham said. “I’m hoping the president recovers fully and quickly.” He noted that several world leaders have recovered from coronavirus without major interruptions and that Woodrow Wilson caught the Spanish Flu (though it was after his reelection).

The thinking among Republicans about the potential scenarios they might face over the next few weeks range from this could actually help Trump to we are on the cusp of party-wide catastrophe.

Graham, always an optimist, is in the former camp.

“This is a chance for him, quite frankly, to talk about the human side of this: ‘This is tough, this is hard, we’re gonna get through it,’” he said. “If he comes out of this thing a little bit humbled and focused on speeding up vaccines and trying to safely reopen the country, then I think he’ll probably be okay.”

In the videos and statements he released over the weekend, Trump already tried to recast his illness in terms akin to what Graham recommends.

“We’re going to beat this coronavirus, or whatever you want to call it, and we’re going to beat it soundly,” he said on Saturday. “If you look at the therapeutics, which I’m taking right now, some of them, and others are coming out soon that are frankly like miracles.”

Other Republicans are floating the idea that illness could unleash a wave of empathy for the president. “If he comes back to the White House and he’s seen as being fully recovered, 10 days from now or two weeks from now, he’s debating or he’s back on the road, I think it could be a positive,” said a Republican close to the president. “I think it could make him more human and he can relate to the 7 million people or so that have come down with it.”

A close cousin of the empathy argument is that defeating the virus could serve to underscore another alleged Trump trait: his virility. “I think the president’s strongest attribute has always been his strength,” said Christopher Ruddy, a friend of Trump and CEO of Newsmax. Even if people disagree with him here and there on issues, “they like that he’s strong and I think we see this during covid, he’s exhibiting strength.”

Other Republicans, used to seeing Trump slip out of hairy situations that would destroy most politicians — the Access Hollywood tape, impeachment — practically yawn at the turn of events. “We’ve seen that time after time,” said a White House official discussing whether this would blow over. “I don’t know if this would be any different but we’ll see.”

On the other side of the spectrum, many Republicans said the reckless way in which Trump travelled, held big rallies, and refused to consistently wear a mask or encourage his supporters to do so as catastrophic.

“Today feels like the election’s over,” said a veteran Republican strategist who, like others in the party, requested anonymity to speak candidly. “The polls have dropped all last week everywhere, it just feels like the end is near. And I don’t know what they can do to rehabilitate it until he gets better. There’s too many seniors who think he’s been irresponsible and this all started when he politicized the coronavirus. It started back in April and May, but it’s really peaking now.”

A senior Republican congressional official spoke for many by arguing that the handling of the issue over the weekend was “incredibly worrying,” but that it was too early to judge whether the issue further jeopardizes Trump’s reelection chances, the Barrett nomination or GOP control of the Senate.

“Do people show sympathy because he’s sick and is trying to battle through this?” he asked. “Or do they say, ‘You’re the president and if you had taken common sense precautions there’s no way you would have gotten sick.’ If it becomes, ‘You are reckless and this is the metaphor for how reckless he was,’ then we’re facing a tsunami. But it’s too early.”

The official added one caveat, a scenario that he believed would crush the GOP on Nov. 3.

“If the White House lied about the timeline and he went to events and was around people knowing he was covid-positive,” he said. “I think that is the single biggest thing that would resonate with regular people in terms of how irresponsible he was — if he put other people in danger.”

He added, “That could turn this into a death spiral.”