‘Republicans need to get serious’: 2020 vote-by-mail battle heats up 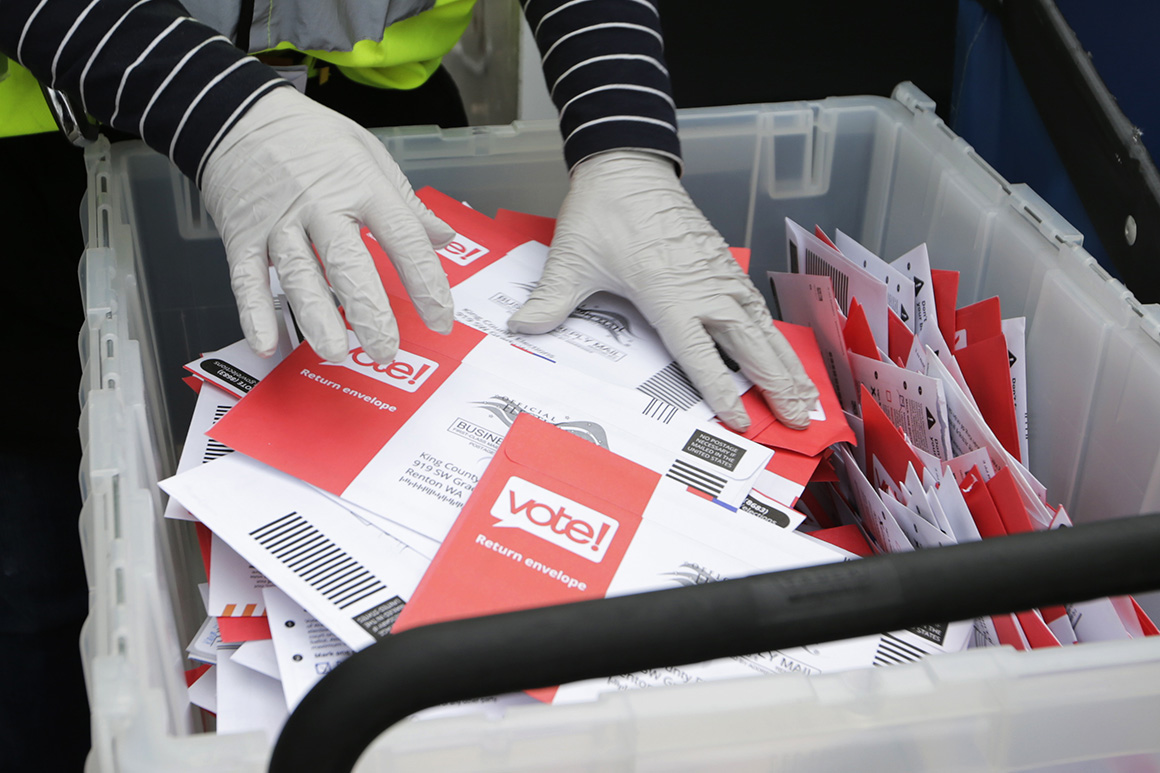 Coronavirus has campaigns rushing to put voting by mail at the center of their general election strategies — and some Republicans worry they’ve already fallen behind, as President Donald Trump dismisses the method and drives doubt about mail voting among the GOP base.

Multimillion dollar programs urging mail voting in November are already coming together, as both parties envision a social-distancing election featuring a spike in absentee ballots, according to interviews with more than a dozen campaign strategists, party committees and outside groups. Organizing Together, a field-focused group founded by Obama alumni, is partnering with Priorities USA, the Democratic super PAC blessed by Joe Biden’s campaign, to air digital ads in battleground states educating voters on how to cast ballots by mail. The Democratic National Committee called vote-by-mail programs a top priority.

But while conservative campaigns and groups like Americans for Prosperity are planning to pump more spending into their own mail programs to drive turnout, there is growing concern among Republicans that this month’s Wisconsin elections — which saw Democrats capture a state Supreme Court seat after pivoting aggressively to encourage supporters to vote by mail — demonstrate a lack of Republican readiness to wage a campaign dominated by absentee ballots.

One Republican consulting firm is already developing models that forecast voters’ interest in (or skepticism of) voting by mail, while another GOP firm sent a memo to campaigns urging them that “now is the time to push early and absentee voting.”

“Wisconsin was the stress test on this issue, and it’s clear that Republicans need to get serious,” said one Wisconsin Republican, granted anonymity to discuss the issue candidly. This Republican acknowledged the party was outmatched by Democrats’ efforts on chasing down ballots. “We have to overcome our instinctive hesitation and become more effective at it.”

The hesitation is being driven from the top. Trump has dismissed mail voting as ripe for fraud, even though studies have found that voter fraud is rare. “Mail ballots, they cheat. Mail ballots are very dangerous for this country because of cheaters,” Trump said during a White House briefing earlier this month.

GOP campaign professionals largely know they can’t abandon it amid a pandemic — but they also know how important it is to the base to stick with the president.

“The instruction manual says, ‘Don’t publicly disagree with the president, but do whatever you need to do,’” said former Rep. Carlos Curbelo (R-Fla.). “Certainly in Florida, I can assure you, the Republican Party and all Republican campaigns are going to be pursuing mail voting very aggressively.”

Operatives are focusing on the 34 states where registered voters can request an absentee ballot for any reason, particularly those states that only recently eased those requirements, like key battlegrounds Michigan and Pennsylvania. They pointed to the evidence out of Wisconsin, where more than two-thirds of voters cast ballots by mail even without any changes to election administration policy. Michigan and Pennsylvania could see similar jumps in mail-ballot participation depending on social-distancing requirements this fall.

“We’ll certainly see a much higher percentage of voting by mail [in 2020] than we saw in November 2016, which was less than 30 percent,” said Tanya Bjork, Organizing Together’s Wisconsin state director. “Groups like us are going to be leaning into getting people to vote by mail more aggressively.”

But voters in Michigan or Pennsylvania, new to the loosened absentee system, need to be educated on it, said John Brabender, a Republican strategist based in Pennsylvania. He said it “changes costs, it changes targeting, it changes timing of messages, and it goes from voter persuasion to also voter education.”

“Wisconsin was a wake-up call, and we’d better learn from it,” said Brabender, who is working on several all-mail Republican primaries slated for June.

Former National Republican Congressional Committee Chairman Tom Davis said the party’s “assumption is that mail-in ballots help Democrats, and that’ll be true until Republicans figure out how to deal with it,” adding that “the problem is that [Republicans] are not used to employing this.”

In some states, little is likely to change. In two key Senate states — Colorado, which has universal vote by mail, and Arizona, where a substantial portion of the electorate vote by mail — campaigns were already focused on these tactics.

“I think there’s a wrong mythology that it’s bad for Republicans,” said Josh Penry, a Republican strategist based in Colorado, which moved to an all-mail voting system in 2013. Penry pointed to state legislative victories for Republicans in recent cycles on the strength of their mail programs.

And nationally, Republican campaigns are quietly moving along with plans to encourage their voters to take advantage of voting by mail in key states.

Campaigns could use primaries as “beta test programs” for November, while there are also “a lot of conversations at the party level to ensure that campaigns are preparing themselves,” said Josh Holmes, a top adviser to Senate Majority Leader Mitch McConnell.

“Most campaigns have some element of ballot chasing and they have some level of expertise in it,” Holmes said. “It’s just about scaling it up.”

In both parties, best practices from states accustomed to vote-by-mail will likely be adopted elsewhere.

“Vote-by-mail will be a big piece of what we do in the states” in 2020, said Ashley Walker, national campaigns director for For Our Future, a progressive organization that does field organizing work in battleground states. She said the group will replicate its “best practices” in states like Florida, where a third of voters mail in their ballots, to states where it’s not as part of the culture, “educating voters on how they can do it in this moment,” she said.

Americans for Prosperity President Tim Phillips said his group is “absolutely going to up the percentage of dollars that go into absentee and early voting,” where they run grassroots programs in dozens of competitive congressional races. Phillips said their own program in Wisconsin was successful in getting their identified voters to request and complete absentee ballots.

While there is uncertainty for conditions in November, there is a heightened urgency for candidates facing primaries soon. Some Democratic candidates backed by the national party, including Sara Gideon in Maine and Theresa Greenfield in Iowa, have summer primaries and have used social media and dedicated web pages to encourage their voters to request absentee ballots and educate them on the process.

Sarah Riggs Amico, one of the Democrats in Georgia’s June Senate primary, recently updated her website to include a guide to absentee voting by mail. Teresa Tomlinson, another Democrat in the primary, said her campaign is pressing voters about returning absentee ballot requests, which were mailed to all the state’s voters. She said in an interview that explaining the mechanics of absentee voting was “critically important” — the same message primary rival Jon Ossoff told campaign volunteers via video conference earlier this month.

“Our field team is reaching out to every voter who has requested a Democratic absentee ballot, and we’re encouraging all our supporters to vote by mail,” said Ellen Foster, Ossoff’s campaign manager.

For campaigns, shifting to a heavy emphasis on vote-by-mail will scramble spending schedules and expand the length of time they need to be communicating with voters. It also requires new tactics for picking up ballots, as volunteers may not be able to door-knock for ballot retrieval — a strategy allowed in some states.

“You move up your spending, use more of your money sooner,” said Corry Bliss, a Republican strategist. But he said for most campaigns, those changes will come in the summer, when it’s “clear what the rules of engagement” will be in November.

In the meantime, operatives stress that down-ballot campaigns should prepare early and not rely on national organizations to fill the gaps on field work, particularly in House races outside the presidential battleground states. IMGE, a Republican digital firm, drafted a memo encouraging candidates to push early and absentee voting by having draft emails, social media posts and phone messages ready in advance of potential changes in election details, and to “go back to the drawing board” on get out the vote, investing in tutorials explaining new processes to voters.

“As a down-ballot race, you can’t control the movement of a nationwide vote-by-mail effort,” said Samantha Steelman, an organizing director for Pete Buttigieg’s presidential campaign who is advising House campaigns to have those materials ready. “That’s why it’s critical for campaigns at all levels to start educating voters now on their voting options in their state and not wait for national groups.”

- Advertisement -
Facebook
Twitter
Pinterest
WhatsApp
Linkedin
ReddIt
Email
Tumblr
VK
Previous articleTrump Says He ‘Can’t Imagine Why’ There’s A Spike In Disinfectant Use Since He Posed It As Possible Cure
Next articleOrioles' Trey Mancini reveals he has Stage 3 colon cancer, doesn't expect to play in 2020