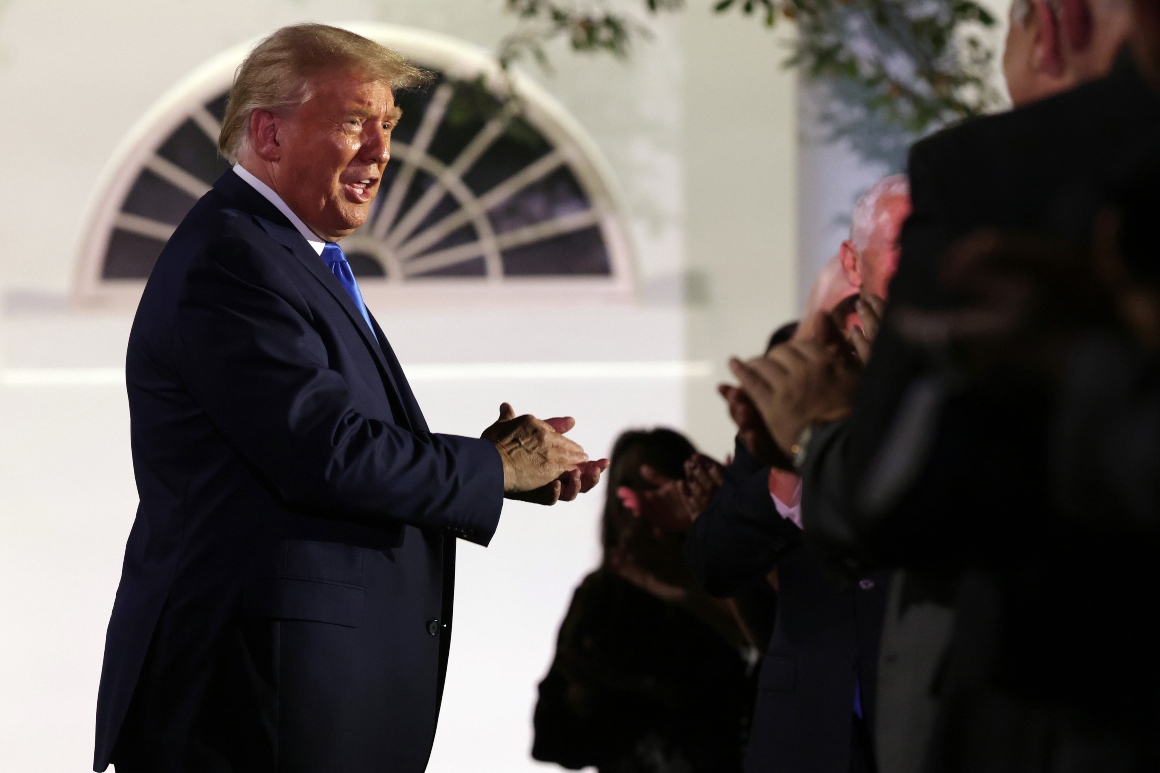 Halfway through the 2020 Republican National Convention, Trumpworld believes they’re nailing it — from the messaging to speakers to production values, smacking down predictions their event would be a chaotic mess due to the late planning after months of wrangling over an in-person celebration. Aides only had four weeks to schedule the part-live, part-virtual convention based out of a D.C. auditorium and the White House, with the majority of the speeches written in the last two weeks.

“I didn’t exactly have high expectations for the RNC. I thought we had a chance to be slightly better than the DNC, but I thought we ended up doing worlds better,” said one Republican close to the planning.

“Our presentation was 100 times better than the Democratic convention.”

Throughout the second night of the GOP convention, planners tried to show off a younger and more diverse face of the GOP — while hitting many of the most important themes of the Trump era.

The proceedings gave top billing to a teenager maligned by media coverage; a former state attorney general and Trump impeachment lawyer railing against the business dealings of Joe Biden’s son; a Maine lobsterman, a Wisconsin dairy farmer and a small manufacturer all bemoaning what came before Trump and celebrating what came after — a reflection of the campaign’s careful microtargeting of voting blocs they hope to secure in 70 days.

The Republican convention’s hurried planning imbued the team with an underdog mentality and hectic vibe. Aides hoped a successful production for the final two nights would translate into momentum and energy as the presidential race heads into the fall and a handful of polls show the race tightening — recreating the underdog spirit of the 2016 race that secured Trump’s surprise victory.

Though the first night of the convention received worse television ratings than the first evening of the Democratic event, and critics called some speeches dark or revisionist particularly on the administration’s handling of the pandemic, Trump officials feel like they scored successes.

They point to efforts to show off Trump’s more hospitable, softer side through videos of him interacting with everyday Americans like health care workers and with former hostages. They celebrated the small-business owners featured on the second night, the uplifting stories from struggling Americans and the wide range of Republican views — whether they came from an anti-abortion activist or Trump’s three family members who spoke.

Eric Trump, the president’s son and one of the leaders of the Trump Organization, said his father ran for president “not because he needed the job, but because he knew hard-working people across this great country were being left behind.”

The second night treated the coronavirus pandemic mostly as an afterthought — referring to it in past tense despite widespread worries about shuttered schools and mounting fears about a new wave of the virus hitting this fall. Only Melania Trump, addressing the ongoing pandemic early in her remarks, acknowledged the way the virus has killed thousands and upended lives for months.

“My deepest sympathy goes out to everyone who has lost a loved one. My prayers are with those who are ill or suffering. I know many people are anxious and some feel helpless. I want you to know you are not alone,” she told the mostly maskless crowd in the Rose Garden.

It all went much better than Trump orbit thought possible just one month ago after the president scrapped plans to hold the convention in Jacksonville, Fla., the second attempt after much of the proceedings planned for Charlotte, N.C., had been scrapped.

Even Trump’s critics said the campaign was doing what it needed amid a devastating, ongoing pandemic and bruising economic downturn.

“They are trying to change the narrative a bit around the idea of Trump being on the defensive,” said Michael Steele, former chair of the Republican National Committee. “The problem is, it’s hard to do when you are running into the reality of 170,000 Americans who have lost their lives because of the coronavirus and thousands of Americans getting infected.”

Some of the convention’s base-pleasing messages could appeal to a subset of voters, who Trump has lost over the last few months including senior citizens, women, suburban voters and religious conservatives.

“There is the potential he will claw back some of those voters and get a bump,” said Tim Miller, political director of Republicans Voters Against Trump, a group running provocative anti-Trump ads during the convention. “For a week, all of the things they like about Trump will be front and center, but game on. Crazy Trump could still come back out.”

The evening delivered image after image to alter perceptions of Trump ingrained in public discussion in recent months and years.

In the convention’s re-telling of the Trump presidency, the coronavirus pandemic is a problem already solved and the economy is back to its heights. The video of the president attending a naturalization ceremony for five immigrants at the White House offered a montage in sharp contrast to the administration’s persistent efforts to reduce the number of legal immigrants and visa holders allowed into the country.

In addition to Trumpworld doubling down on the culture wars or portraying the election as a fight over the future of religion, gender norms and free speech, Republicans also appreciated the messages about additional tax cuts or promises Trump would rebuild the economy if he won a second term.

In another taped video, top White House economic adviser Larry Kudlow discussed the potential of additional tax cuts in a second term and offered a slew of other upbeat prospects to counter the grim picture of the past six months.

“I thought the Democrats did a good job last week of making you feel like Biden is a nice guy, but where they missed was appealing on the economic woes people are facing,” said one Republican close to the White House. “I don’t know if Trump wins yet, but there will not be a blue tsunami.”