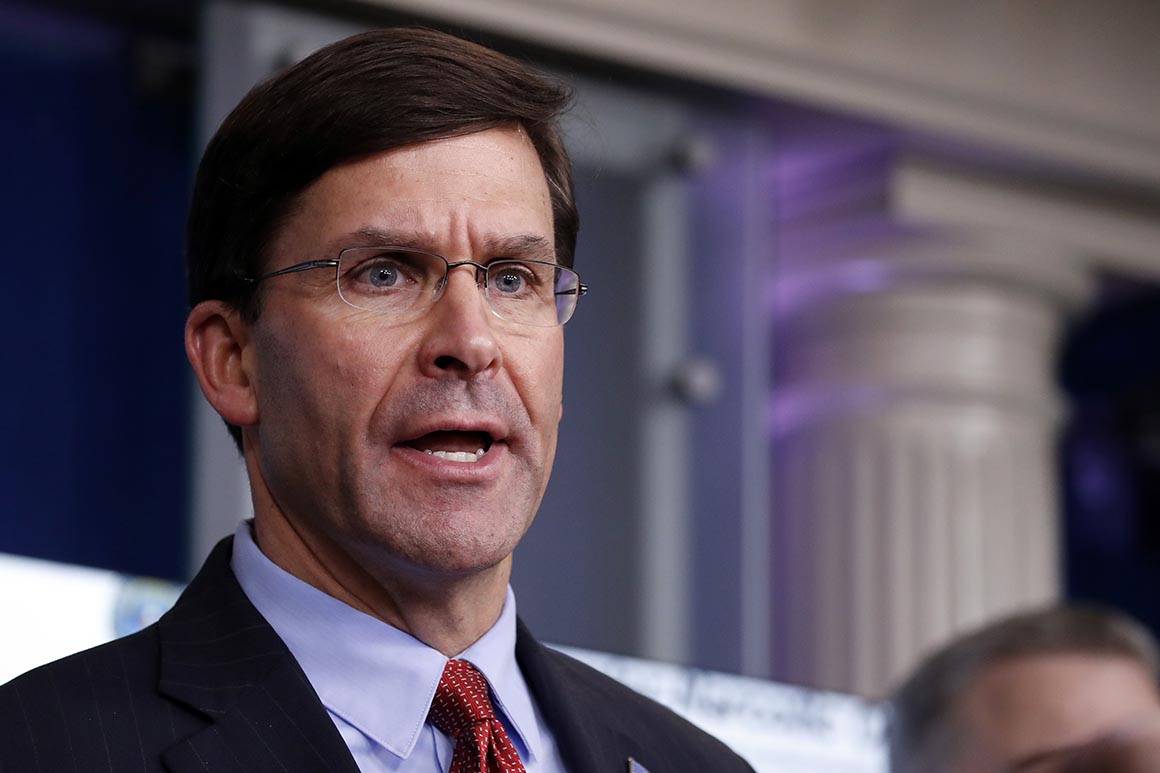 “He should be allowed to express his opinion and his advice should be heeded,” concurred Sen. Shelley Moore Capito (R-W.Va.). “And I hope he would stay on. I like him. We’ve got enough vacancies.”

Earlier this week, Trump threatened to invoke the Insurrection Act and send the military to cities dealing with violence, amid peaceful protests against racial injustice. But Esper said Wednesday that the current situation does not necessitate the use of active-duty forces.

Esper added that he does everything he can “to try to stay apolitical” and “keep the department out of politics.” He faced criticism, however, after he joined Trump in front of St. John’s Episcopal Church om Monday evening just moments after authorities used force to clear peaceful protesters from the area.

The Defense secretary’s remarks prompted frustration among White House officials and are fueling speculation about whether he will be the next Cabinet official to get canned. When asked whether Trump still had confidence in Esper, White House press secretary Kayleigh McEnany didn’t offer a forceful defense of the Cabinet official. Instead, she told reporters that if Trump loses confidence, “You all will be the first to know.”

Later Wednesday, Esper went back on a Pentagon plan to send active duty troops deployed to Washington, D.C., back home.

Esper, who is a former Senate staffer, still maintains bipartisan respect on Capitol Hill and GOP senators spoke fondly of working with him.

“I’ve been with the secretary at international security conferences,” said Sen. John Barrasso (R-Wyo.) “He does an excellent job representing the United States and our military.”

Sen. Mitt Romney (R-Utah), the president’s most vocal Republican critic in the Senate, said he hopes “that having a different point of view is not a disqualification for being in this administration” and that “a key part of leadership” is being open to other perspectives.

Still, the questions around Esper’s fate have prompted rumblings about potential candidates who could replace him, including Sen. Tom Cotton (R-Ark.), a combat veteran who encouraged Trump to invoke the Insurrection Act.

A person close to Cotton says he’s focused on running for reelection this fall and that only if Trump is reelected would he consider serving in the Cabinet in a second term.

Some Republican senators brushed off questions about tension between the president and Esper. Senate Armed Services Chairman Jim Inhofe (R-OKla.), who spoke with Trump on Wednesday, doesn’t see much daylight between the two men.

“Both of them have the same position, that position is the last resort is troops,” Inhofe said.

Some Republican senators also said Wednesday that they agreed with Esper and don’t see the need to send in the military to cities where protests, and in some instances looting and vandalism, are taking place. Instead, Republican senators are encouraging law enforcement at the state and local level to handle any unrest that might occur.

“These tasks ought to be relegated as much as possible to the state and local authorities, law enforcement, police,” said Senate Majority Whip John Thune (R-S.D). “I know there are instances in the past where they had to call up active-duty personnel. But I think the goal is always to de-escalate, not escalate. In my view that’s the right call.”

Replacing Esper in the middle of a presidential election year could also prove challenging. The Senate confirmed Esper last July in a rare 90-8 vote, more than six months after his predecessor, Jim Mattis, resigned. Trump had initially picked Patrick Shanahan to replace Mattis, but his nomination fell through amid questions about his personal life.