The internet has transformed most areas of our lives over the last few decades, and the technology keeps improving: researchers just set a new record for data transmission rates, logging an incredible speed of 178 terabits per second (Tbps).

That’s around a fifth faster than the previous record, set by a team of researchers in Japan, and roughly twice as fast as the best internet available today.

With 4K movies about 15GB in size, you could download about 1,500 of them in a single second at the new speed.

This could be more than just a super-fast lab experiment too – the technology used to reach the 178 Tbps record can be added to existing optical fibre pipes relatively easily, according to the scientists behind the project. 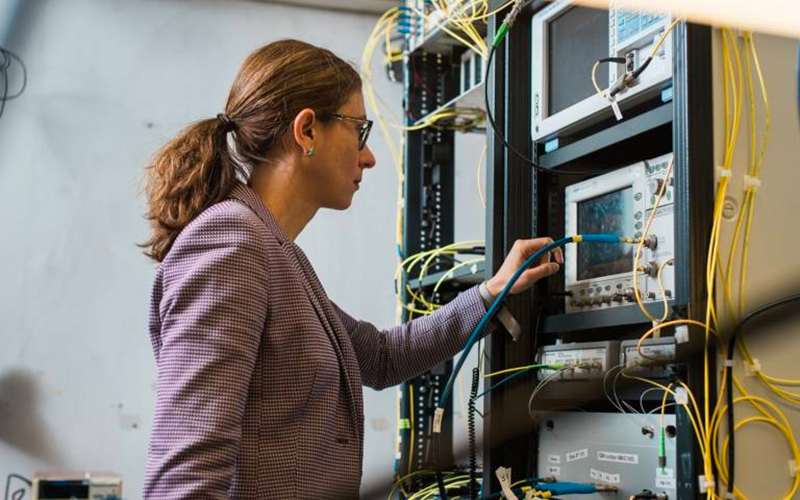 Today’s internet is built on optical fibre routes that use amplifiers to stop the light signals from degrading.

Adding the new technology to the existing amplifiers, spaced around 40-100 kilometres (25-62 miles) apart, would need a fraction of the expenditure that would be needed to replace the actual fibre, the researchers say.

“While current state-of-the-art cloud data-centre interconnections are capable of transporting up to 35 terabits a second, we are working with new technologies that utilise more efficiently the existing infrastructure, making better use of optical fibre bandwidth and enabling a world record transmission rate of 178 terabits a second,” says electronic and electrical engineer Lidia Galdino, from University College London in the UK.

To hit this record-breaking speed, the team used a much wider range of wavelengths (colours of light) than are normally used to transmit data.

The bespoke system used a bandwidth of 16.8 terahertz (THz) in a single-fibre core, four times the 4.5 THz used by most of our current network infrastructure.

That bandwidth increase also required a boost of signal power and several different amplifier techniques are combined in this case.

The combination of these techniques meant much more information could be packed into the same space and transmitted more quickly, without that information becoming garbled along the way.

The new 178 Tbps record is pushing the theoretical limits of what a data transfer network can take.

This idea of squeezing more information through existing pipes is one that many scientists are exploring, trying to strike the balance between getting data shifted as photons of light more quickly, without those photons interfering with each other.

If these upgrades can slot into existing infrastructure, so much the better.

Of course with a global pandemic forcing many of us to work and socialise across the internet rather than face-to-face, the need for faster speeds and greater bandwidth has never been more topical – particularly with some 40 percent of the world’s population still yet to be connected.

“Independent of the COVID-19 crisis, internet traffic has increased exponentially over the last 10 years and this whole growth in data demand is related to the cost per bit going down,” says Galdino.

“The development of new technologies is crucial to maintaining this trend towards lower costs while meeting future data rate demands that will continue to increase, with as yet unthought-of applications that will transform people’s lives.”

The research has been published in IEEE Photonics Technology Letters.

Michelle Starr Every exoplanet is special in its own way, but a newly discovered exoplanet 186 light-years away is an especially delicious treat. It's a...
Read more
Science