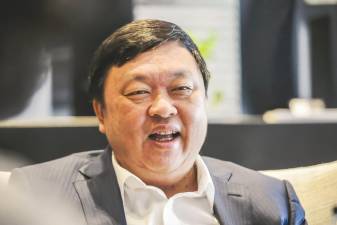 PETALING JAYA: Tiger Synergy Bhd’s board of directors is retaining its control of the group, after the resolutions to remove all the directors failed to garner the shareholders’ support at its EGM today.

Describing the move as a “hostile takeover”, Wei Lian said the support from its minority shareholders was premised on the board’s experience in managing the company over the years.

“The board has managed Tiger Synergy for many years, from the time when it was involved in industry products prior to its diversification into the property sector, with that experience the board has a lot of support from its minority shareholders,” he told SunBiz after the EGM.

On the other hand, Safari Alliance corporate representative Mok Lin Kum explained that its main bone of contention is due to the lack of transparency in the fundraising exercise undertaken in the past 18 months.

“This is our main concern, over RM100 million has been raised but this is not reflected in terms of profits nor in its business activity,” he said, noting that Safari Alliance will not be subscribing to the rights issue.

He also said there is no plan to call for another EGM following the failed bid.

On Feb 12, Tiger Synergy proposed a rights issue exercise involving 738.44 million shares to raise RM29.54 million as well as a private placement of up to 30% of its enlarged share issue to raise RM50.51 million.

Up to RM23.6 million from the rights issue will be used towards general working capital and RM5.06 million for the repayment of bank borrowings.

Meanwhile, the RM36.86 million raised from the private placement will be utilised for property development expenses, RM6.55 million for general working capital and RM6.3 million for the repayment of bank borrowings.

Speaking of Tiger Synergy’s plans, Wei Lian said the company will be converting the land earmarked for PR1MA homes to landed property development. The termination of the affordable housing plan was due to the change of government in the previous general election.

“For the first phase, we will develop 250 units of landed properties on our land in Alam Impian. For the entire project, we expect a gross development value of RM1 billion.”

The project is expected to be launched in the next quarter.

The company is also looking to acquire a parcel of land in the Klang Valley with the money raised from its recent fund raising activity.

Tiger Synergy swung to the red registering a net loss of RM8.14 million for three months ended Dec 31, 2019 against a net profit of RM501,000 in the same quarter a year ago.