Rhythm from the heart 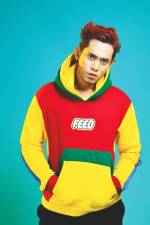 THE name Khai Bahar is one that is familiar to fans of mainstream music, not just in Malaysia, but even in Indonesia, Singapore, Hong Kong, Brunei, Taiwan and Thailand.

Over his four years in the Malaysian music scene, which includes sharing his music on Youtube or the Smule music app, Khai has recorded 16 songs, including two duets with Datuk Seri Siti Nurhaliza and Siti Nordiana.

He pays tribute to his early days trying to promote himself on music apps with his solo Konsert Khai Bahar – Dari Smule ke Pentas Dunia, which takes place on Mar 27 and 28 at Istana Budaya.

The 26-year-old artiste said: “This song is dedicated to my loyal fans who have supported me all this while, as they’re my life and soul. Without them, who would I be?

“The support and motivation from them were my sources of strength and inspiration.”

Brimming with a catchy rhythm and melody, HatiNyawa displays a different side of Khai, who also performs a dance number in the music video, which can be viewed on the Faithful channel on Youtube.

The single is currently available for listening on Spotify, iTunes, KKBox, Deezer, Joox and Apple Music.

By Mariah Haas Miley Cyrus is getting candid about her sobriety. The 28-year-old singer recently appeared on Apple's New Music Daily Radio with Zane Lowe for an interview, which was published on...
Read more
Entertainment

ByGamers are eagerly watching which retailers will be receiving PS5 restock options this month, ahead of the holidays. For now, it appears that options will...
Read more
Entertainment

ByPeter added: "Freddie and he had decided that it was time to release a statement with regards to Freddie's Aids status. Obviously this came...
Read more
Entertainment