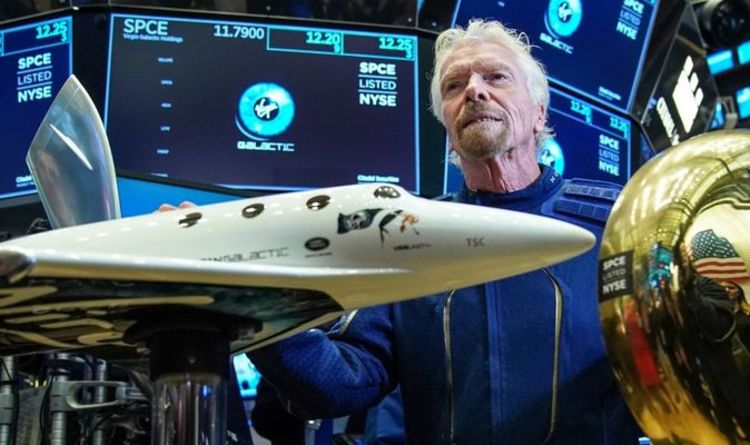 Around 25 million shares are being prepared for sale in the tycoon’s space tourism venture, which have a combined market value of $ 504 million (£405 million). This represents nearly a quarter (22 percent) of Virgin Galactic, meaning the entire stake is worth more than $ 2 billion (£1.6 billion). Virgin Group said in a statement: “Virgin intends to use any proceeds to support its portfolio of global leisure, holiday and travel businesses that have been affected by the unprecedented impact of COVID-19.”

Shares in the venture, which aims to offer the first commercial space flight later this year, were down 3.1 percent late on Monday.

They have surged by 69 percent already this year as anticipation grows over the debut flights into space.

The huge sale from the stake in Virgin Galactic could be pumped straight into Sir Richard’s ailing Virgin Airways Atlantic business.

The billionaire tycoon has been under pressure from some quarters to use more of his personal wealth to prop up Virgin Atlantic, which is also part-owned by Delta.

He has warned the continued coronavirus crisis, which has forced airlines to ground thousands of flights across the world, could see the airline collapse without additional financial support.

Frantic rescue talks have got underway with the UK Government, with Virgin Atlantic looking for a £500million loan and guarantee on further sums owed to it by credit card companies.

Virgin Atlantic has already outlined plans to quickly cut 3,000 jobs, which would also see a significant reduction in its fleet.

Last week, the airline giant said in a statement that seven of its Boeing 747 were to be retired, with its fleet reducing from 43 planes to 36.

Virgin said its plans were designed to “reshape and resize the business to ensure that is it fit for the future, in response to the severe impact of the COVID-19 pandemic on the global economy, our nation and the travel and aviation industry”.

The airline group is forecasting customer demand will collapse by at least 40 percent during the course of this year, with only a gradual recovery in 2021.

But Chancellor Rishi Sunak has warned state aid would be available “only as a last resort” and after the support of existing government schemes and companies’ existing shareholders had been pursued.

He also warned financial help would only be offered to companies who have demonstrated their value to the wider UK economy and to competition in the aviation sector.

Last month, British Airways parent company IAG warned 12,000 employees in the air;line could be made redundant, affecting those including ground staff, cabin crew and pilots.