Richard Osman has opened up about the effect lockdown has had on Pointless, which he hosts alongside Alexander Armstrong. The BBC presenter said the programme is in “trouble” if Chancellor of the Exchequer Rishi Sunak is doing the daily Government update at the same time.

If we’re up against Matt Hancock our ratings shoot up, but when it’s Rishi Sunak we’re in trouble

However, the 49-year-old claimed the opposite happens if Secretary of State for Health and Social Care, Matt Hancock, is the one on screens.

Speaking in a new interview with the Radio Times, the small screen favourite said they have seen “ratings shoot up” during the pandemic.

While Alexander, 50, said he has experienced a different reaction from the general public when out and about.

When asked about the country quizzing in lockdown and if Pointless had gained a new audience, Richard agreed.

Richard Osman has hosted Pointless since it launched in 2009 (Image: BBC)

“Pointless is definitely getting a new audience, although we’re up against Boris Johnson or Matt Hancock sometimes.”

Richard continued by comparing Rishi, 40, to rival show host on ITV’s The Chase.

He continued: “If we’re up against Matt Hancock our ratings shoot up, but when it’s Rishi Sunak we’re in trouble. He’s very much the Bradley Walsh of the Cabinet.”

Matt Hancock has fronted some of the Government’s daily updates on the BBC (Image: GETTY)

Alexander then stated: “It’s hard to be sure if these are new people coming to Pointless – I’m absolutely certain that’s true, but when you go out on the street, you’re not being stopped by quite so many people for selfies, for reasons I can’t understand.

“Maybe it’s the face mask, I don’t know – but we’re not getting the daily feedback.”

The duo have fronted Pointless ever since it launched back in August 2009, after first meeting while at university.

The show has now had more than 1,000 episodes, with the big moment being celebrated in Janaury 2017.

Meanwhile, the TV stars also reflected on how they are surviving lockdown in the chat.

“Well, I decided to take six months off to write my second novel,” Richard stated.

After Alexander agreed he does wear gloves “a lot”, his pal added: “The thing is, this is an incredibly difficult time for a huge amount of people. 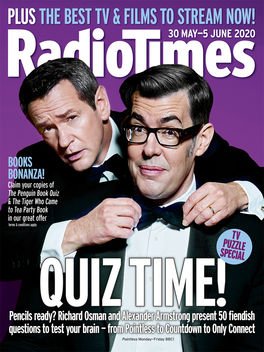 “I’m very fortunate, my kids are older so there’s no home schooling, I have a job and I’m one of nature’s introverts. I think I’ve been very lucky.”

On his own experience, Alexander said: “I’m also incredibly lucky – I’m really glad we’ve got a garden. It’s been useful just to get my head back into family life and actually to genuinely participate in my children’s schooling.”

“I feel I will look back very fondly on the time I’ve spent with them.”