Rick and Morty: Why isn’t the Cthulhu in any episodes? The Cthulhu has not appeared in any episodes of Rick and Morty (Image: ADULT SWIM)

Rick and Morty season four, episode five airs this Sunday (December 15) on Adult Swim and Wednesday, December 18 on Channel 4 in the UK. The character Cthulhu has appeared in the opening and end credits of many episodes but why has he not appeared at least one instalment of Rick and Morty?

Why isn’t Cthulhu in any episodes?

This season on Rick and Morty (both voiced by Justin Roiland), the grandfather and grandson duo have visited an alien planet, found love and made a deal with a wizard.

In episode five, titled Rattlestar Ricklactica, Rick and Morty will find themselves in a space disaster.

Over the years, there have been many memorable Rick and Morty characters including Paul Fleishman (Ryan Ridley), Davin (Dan Harmon) and Jacob (Echo Kellum).

One character fans are missing though from episodes is Cthulhu. 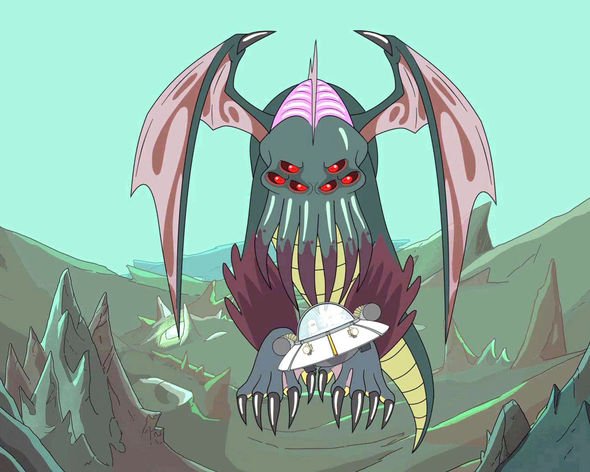 Cthulhu appears in the opening credits of Rick and Morty (Image: ADULT SWIM)

Cthulhu first appeared in the opening credits of Rick and Morty episode one, season one.

He has appeared in the opening credits ever since, including season four.

However, in season four, Cthulhu also appears in the end credits as a baby.

The character is usually seen chasing Rick and Morty’s ship but he has never been seen in an episode. 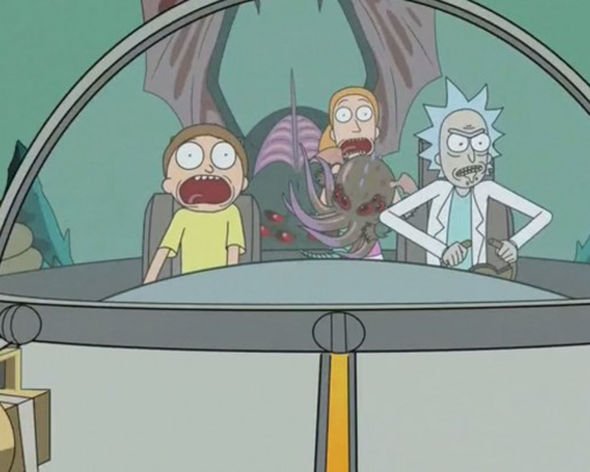 Cthulhu appeared in the end credits of Rick and Morty as a baby (Image: ADULT SWIM)

Justin Roiland: “It’s funny we have a part two to that sequence that we may put into the credits. I shouldn’t have said that out loud. Maybe we won’t.

“It’s really awesome though. We did do a thing with Cthulhu in the episode that got thrown out but I don’t know, we [Dan Harmon] always have the Cthulhu thing.

“I don’t know. It’s there but we don’t know what the hell that story was. It’s a fun story.

“I mean, the idea with the opening credits is that there are three real episode clips and there three completely fake, made-up things every season and we just love that you don’t know what is what until the last episode.”

By the sounds of it, Cthulhu may or may not become a character in the future of Rick and Morty.

Luckily the animated sitcom was given the green light for 70 more episodes, the first 10 of which make up season four of the show.

Cthulhu is not the only character to not appear in any episodes of Rick and Morty.

For example, in the intro sequence, Rick and Morty are chased by frogs which have never made the cut and Jerry’s child has never had an episode.

One fan on movie.stackexchange.com suggested perhaps Cthulhu and other characters are ‘snippets’ of future episodes, cancelled episodes or deleted scenes.

The fan wrote: “If an episode is cancelled/scene is deleted or that snippet isn’t featured in any episodes then I guess we are just to assume that the bit in the intro happened off-screen or maybe in a parallel universe etc.”

A second fan suggested the introduction sequence was made long before episodes of Rick and Morty were even created.

Cthulhu is a fictional character, created by writer H. Lovecraft.

He was first introduced in the short story ‘The Call of Cthulhu’ which was first published in the American pulp magazine Weird Tales in 1928.

Cthulhu is believed to be a Great Priest of the Great Old Ones – terrifying cosmic beings venerated as gods.

Ever since then, Cthulhu has featured in many popular culture references, including Rick and Morty.

His appearance resembles an octopus, dragon and human in one, with tentacles coming out of his mouth.

Rick and Morty airs Sundays on Adult Swim and Wednesdays on E4.

Facebook
Twitter
Pinterest
WhatsApp
Linkedin
ReddIt
Email
Tumblr
VK
Previous articleAndrea Bocelli wife: The secret to happy marriage – and its in the bedroom, tenor says
Next article‘Little has changed over the years’ since Princess Anne and Andrew Parker Bowles romance