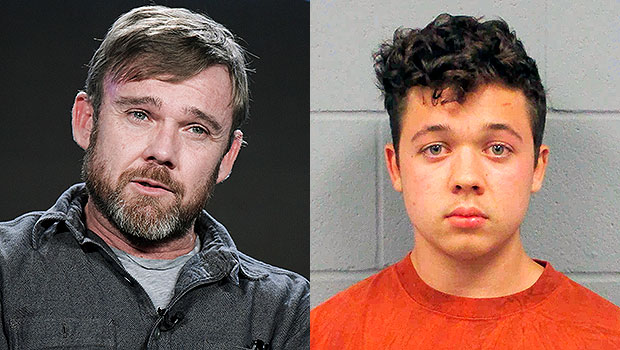 Ricky Schroder, 50, is making headlines after he contributed to accused killer Kyle Rittenhouse‘s recent release from jail by donating a whopping $ 150,000 to his $ 2 million bail bond, according to TMZ. Rittenhouse’s lawyer, Lin Wood, took to his Twitter account on Nov. 20 to announce his release and posted a photo of the 17-year-old smiling and posing alongside Ricky as well as Attorney John Pierce, which can be seen below. “FREE AT LAST!!!” Lin wrote in the caption for the tweet. “Thank you, All Donors. Thank you, All Patriots. Thank God Almighty. #FightBack.”

Rittenhouse’s controversial release, which allows him to be free pending trial, comes almost three months after he was accused of shooting and killing two men as well as wounding a third with an AR-15 style rifle during protests surrounding the police shooting of Jacob Blake in Kenosha, Wisconsin. Although one of the protestors was armed with a handgun and Rittenhouse, who is from Antioch, Illinois, claims he acted in self defense, the killings brought on a lot of criticism from the public.

Here are five things to know about Ricky and his involvement in Rittenhouse’s release from jail.

1.) He was one of two people in the public eye who donated to Rittenhouse’s bail fund. MyPillow CEO Mike Lindell also donated $ 50,000, TMZ reported. Wood thanked both Ricky and Mike for “putting us over the top”, when referring to meeting the $ 2 million goal that allowed Rittenhouse to be released, in a tweet.

2.) His acting career started at a young age. Ricky began modeling and appearing in photo shoots when he was just three-months-old and by his sixth birthday, he had already appeared in 60 advertisements. He went on to make his acting debut in the 1979 remake of The Champ with Jon Voight when he was just nine-years-old and won a Golden Globe Award for his work in the film. The breakthrough role led to many other acting gigs throughout his teen years and into adulthood, including the 1980s sitcom Silver Spoons and the drama NYPD Blue from 1998-2001.

3.) In addition to acting, he attended college. After graduating high school, Ricky enrolled in Mesa State College in Grand Junction, Colorado while continuing to audition for various roles.

4.) He was arrested for suspicion of domestic violence. The arrest happened on May 1, 2019 after an incident with his girlfriend and he was held with a $ 50,000 set bail. The L.A. Sheriff’s office PIO confirmed the arrest to HollywoodLife in a statement and revealed a similar incident also took place the month before.

“Malibu Lost Hills Station received a call of domestic violence at a residence on the 21900 block of Gold Stone Road, Topanga, at approximately 12:43 a.m.,” the statement read. “When deputies arrived they made contact with the suspect and victim. They identified evidence of a physical altercation. The female adult victim declined medical treatment. Suspect Richard Schroder, male white 49 years-old, was arrested for Domestic Violence. He was booked at Malibu Lost Hills Station, and is being held in lieu of $ 50,000 bail. A similar incident occurred between Richard Schroder and the victim, at the same residence, on April 2, 2019, approximately 12:26 a.m. Suspect Schroder was released on bond.”

Ricky was never prosecuted for either arrest.

5.) He’s a father of four. Ricky shares his children, which include two boys and two girls, with ex-wife Andrea, whom he was married to since 1992. She filed for divorce just weeks before their 24th anniversary in 2016 and cited “irreconcilable differences” as the reason for the split.