Ringgit lower against US dollar amid global crude price fall 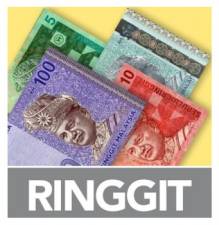 KUALA LUMPUR: The ringgit closed lower against the US dollar today amid a decline in global crude oil prices as well as heightened Covid-19 concerns.

A dealer said US President Donald Trump announced measures to tackle the Covid-19 outbreak that included a ban on travellers to the United States from Europe for the next 30 days.

“Trump also announced that he would ask Congress for legislative action to provide payroll tax relief, as well as other measures for several groups impacted by the virus,” he said.

That comes after the World Health Organisation declared Covid-19 a global pandemic on Wednesday.

He said oil prices fell again on Thursday, adding to steep losses in the previous session after the US banned travel from Europe following a declaration that the Covid-19 outbreak is now a pandemic.

“The threat of a flood of cheap supply compounded market concerns as Saudi Arabia promised to raise oil output to a record high in a standoff with Russia,” he added.

International benchmark Brent crude oil declined 5.14% to US$ 33.95 per barrel at the close.

Against other major currencies, the ringgit was traded lower.