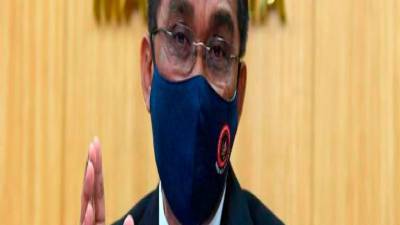 LATE last year, actress Sangeeta Krishnasamy watched the documentary Eye on the Ball which depicts the true story about Malaysia’s blind national football team and their journey to the 2017 Asean Para Games.

Sangeeta says: “Their story was touching, and what their coach Sunny Shalesh did for the team is really inspiring.”

The documentary brought back childhood memories, where as a young girl, Sangeeta’s poor eyesight forced her to start wearing spectacles.

“I have been wearing glasses since I was seven years old,” she says.

“I come from an underprivileged background, and owning a pair of spectacles was a luxury,” she explained.

Despite the family’s tight financial situation, her mother managed to get the spectacles that Sangeeta needed.

She says: “I was active in sports. Sometimes, the spectacles would break during sporting events. I had to use cellotape to fix it as my mother could not afford to buy me a new pair.”

She pointed out that some of her classmates were far worse off than her. As they could not even afford to buy a pair of spectacles despite their poor vision.

Sangeeta says: “They could not see what was written on the blackboard clearly. So, they began to lose interest in their studies and got bad results in their exams.

“Some of their parents refused to believe them when they expressed a need for spectacles. The parents thought the children were making excuses for their bad results in their studies. I remember feeling very sad for my classmates. While they were broken, at least, I owned a pair of spectacles.”

This childhood memory inspired her to start a new personal project, to sponsor spectacles for children who can’t afford them.

To date, Sangeeta has given away spectacles to 12 children, from the ages of seven to 12 years old.

She is working together with Focus Point Vision Care Group on this initiative. She brought the children to a Focus Point outlet to get their eyes checked and by the following week, these children got their spectacles.

She was extremely glad to see the big smiles and joy on the faces of the children once they obtained their new spectacles.

“A lot of my friends helped me to get this project off the ground,” she says

“I could not have achieved anything without their help,” she says.

In future she hopes to be able to sponsor more children to get their own spectacles.

Currently the Covid-19 pandemic is somewhat of a hindrance for her to launch this project on a larger scale.

“Once the pandemic is over, I believe I will have more freedom to go to schools and talk to the principals about this project,” she says.

“Together, [I am hoping] the principals and I could put our heads together and identify the children who are in dire need of spectacles.”

Besides her love for helping children, she also developed a strong love for the Malaysian tiger.

“Our tigers are vanishing fast,” she says.

“It is great that we have an organisation like MYCAT, who are working to save all these tigers from extincton.”

She was also impressed by one of MYCAT’s programmes called The Catwalk, where volunteers take members of the public on a trek throughout the forest at the Sungai Yu Ecological Corridor in Merapoh, Pahang.

While trekking and enjoying the great outdoors, both the volunteers and member of public will look for signs of poaching, such as snares and traps, and dismantle them.

“It is an opportunity for members of the public to be involved in the protection of tigers, as well as other endangered wildlife species and the habitat of the forest,” she says.

“I believe The Catwalk allows ordinary people like you and I to get close to nature. I always encourage my friends take part in The Catwalk.”

She also pointed out how MYCAT is also working with the Batek Orang Asli community to restore severely damaged tiger habitats by planting trees and promoting natural regeneration.

“I really admire all the hard work they have put in to save the tigers,” she says. “I always highlight their activities on my social media.”

Where her career is concerned, she has finished shooting a telefilm called Amma under the direction of Sabri Yunos where she plays a hearing-impaired character who suffers from a speech disorder.

“The telefilm tells a beautiful story between a single mother and her young daughter,” she says.

“I’m really impressed by the way Sabri put so much soul into the story.”

Next month, she will start shooting her new movie called Juang, which focuses on the lives of frontliners who are batting the Covid-19 pandemic.

She says: “Currently I am not at liberty to tell you much about the film. All I can say is that I have to learn to ride a ‘kapcai’ to get under the skin of my character.”