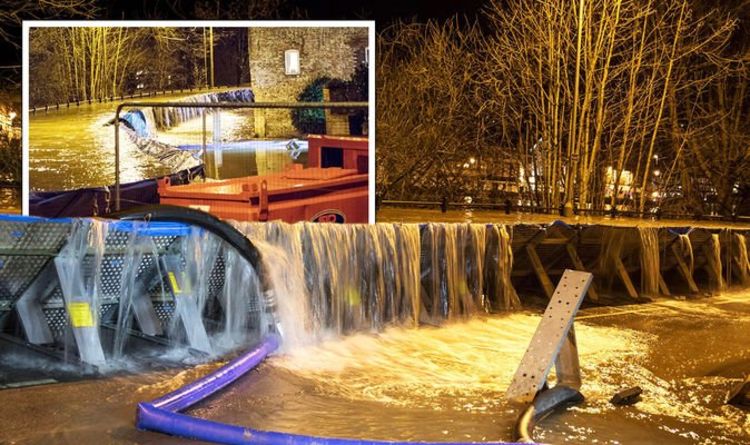 Images captured in Beale’s Corner in Bewdley, a riverside town, show floodwater pouring out over the top of temporary barriers. Local Hereford and Worcester firefighters desperately tried to evacuate residents following danger to life concerns. It is the first time the Severn has flowed above the line of flood barriers in years.

A video posted up on to Twitter by an Environment Agency manager showed the extent of the damage, as the flood consumes an area close to people’s homes and businesses.

The EA said the river in Bewdley was close to its highest ever recorded level.

A second replied: “ It looks deadly down here in Ironbridge. Not only is the water high, but it’s moving fast as well. Hell of a sight, but not the lazy River Severn we’re often used to.”

A third commented: “Spare a thought for all those working through the night to evacuate and rescue people hit by devastating floods along the River Severn & elsewhere.

“Water is the most underestimated danger and emergency services really are risking their lives to help others.”

Caroline Douglass, director of incident management at the EA, said: “River levels remain high and communities along the river Severn, in particular Shrewsbury, Bewdley and Ironbridge, should be ready for potential flooding.

“Groundwater levels across parts of Dorset, Wiltshire, Hampshire, and Sussex are continuing to rise and will lead to more flooding impacts later in the week.

“We have seen our third weekend of exceptional river levels and stormy weather; with the effects of climate change, we need to prepare for more frequent periods of extreme weather like this.

“People need to be aware of their flood risk, sign up to flood warnings, make a flood plan and not to drive or walk through flood water.”

England has had more than 141 percent of its average rainfall for February so far this month and gauges on 15 rivers have recorded their highest ever water levels, including the Colne, Ribble, Calder, Aire, Trent, Severn, Wye, Lugg and Derwent.

Head of the EA, Sir James Bevan, warned people living in flood-prone areas that may have to abandon their homes for good.

He said: “In a few places the scale of coastal erosion and the risk of flooding from rivers or the sea will become so big that it may be better for communities to choose to relocate out of harm’s way.”

The EA has warned flooding is possible on the rivers Wye, Ouse and Trent, with other areas at risk from localised flooding caused by heavy rainfall expected on Friday.