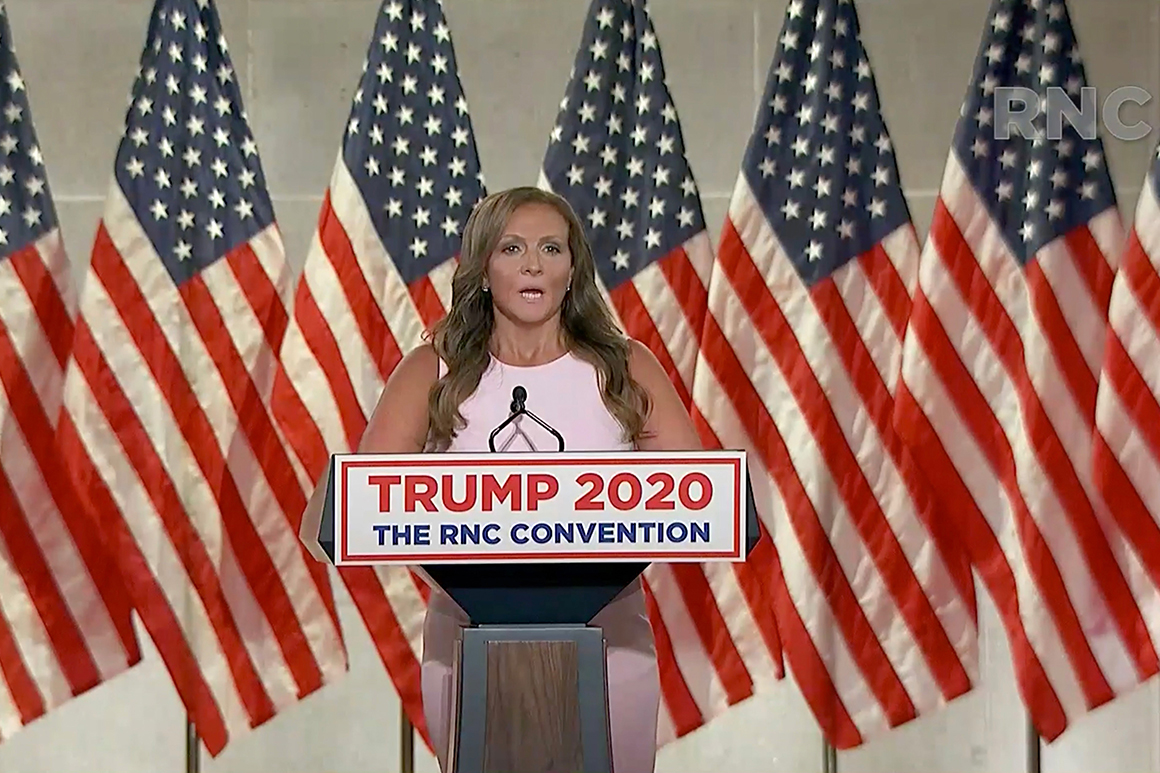 A video recapped the statements Trump has made repeatedly at his press briefings — blaming China, the World Health Organization, and mistakes by scientists early on, as they worked to quickly learn about a virus none had ever seen before. The video also depicted Democratic governors like Gavin Newsom of California and Andrew Cuomo of New York either bumbling their own response or praising Trump for his.

“One leader took decisive action to save lives, President Donald Trump,” the narrator of the video said. “Banning travel from China and coronavirus epicenters, Biden charged xenophobia. But President Trump was right.”

But numerous public health experts, including top scientists whom Trump has diminished or contradicted, have said that the president failed, tragically, to mount a coordinated national response using the basic building blocks of public health, including a widespread, efficient and accessible national testing program.

That wasn’t the image at the convention.

One speaker, Amy Johnson Ford, a nurse from West Virginia, praised Trump for expanding telemedicine to rural areas like her own community. The Trump administration did use emergency powers so many more people could access telehealth, not only in rural areas. It’s one of the administration’s few pandemic policies that has received wide bipartisan approval.

“I can tell you without hesitation Donald Trump’s quick action and leadership saved thousands of lives during Covid-19,” Ford said.

G.E. Ghali, an oral surgeon and chancellor of the LSU Health Sciences Center in Shreveport, La., praised Trump’s response — despite the fact that hospitals, doctors and other health providers were pleading at that time with Washington to use all of its powers to get personal protective equipment like masks and gowns to hospitals. Without adequate PPE, hundreds of health care providers have died.

Ghali himself got the virus. He was able to get a rapid test, receiving the results in minutes and starting remdesivir treatment within hours, although the drug is in short supply. After that he got convalescent plasma — a treatment that is safe but not yet proven to be effective. Trump has championed it, and publicly pressured the FDA to grant an emergency use authorization for plasma, which it did on Sunday.

Ghali praised Trump for speeding up testing and supplies — the very things that many public health experts have cited as the administration’s biggest shortcomings. Testing in particular has been a chronic problem, allowing the virus to spread.

“As a physician, I’ve seen firsthand how these breakthroughs have saved countless lives. As a patient, I’ve benefited from the expedited therapies made possible by the swift action of this administration,” Ghali said. “President Trump truly moved mountains to save lives.”

Trump himself in one videotaped segment met with front line workers — including some from the U.S. Postal Service — and boasted of a decisive response.

“We have delivered billions of dollars of equipment that governors were supposed to give, and in many cases they didn’t get. So the federal government had to help them, and all the people that did this incredible work, they never got credit for it,” he said as he thanked them for their service.

He talked to one man who got the coronavirus and asked him what medications he took.

“I won’t even ask you about the hydroxychloroquine,” Trump said, referring to a malaria drug that has been discredited as a coronavirus therapy, which Trump had continued to support and even took himself despite mounting evidence that it didn’t help. “It’s a shame what they did to that one.”

The Biden camp criticized the RNC’s portrayal of the Trump administration response.

“If you tuned into the Republican convention tonight looking for some indication from President Trump that he has a strategy to contain the coronavirus, you’re still waiting,” the campaign said in a statement. “Six months into this crisis, he still doesn’t have what Joe Biden proposed months ago: a plan to get us out.”