Rob Rinder shock: How Judge Rinder got drunk during Celebrity Bake Off 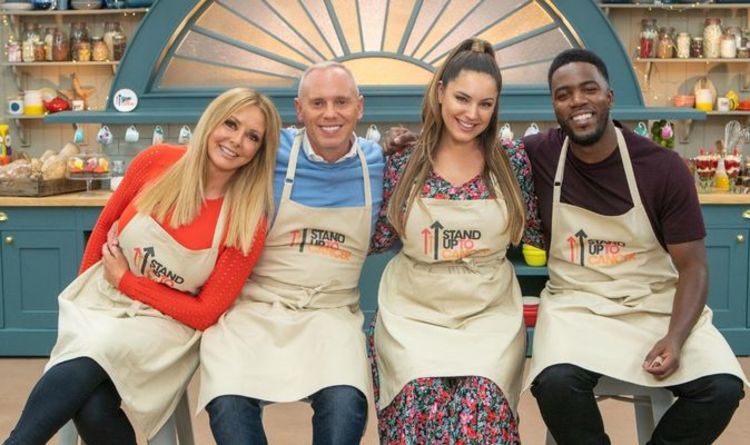 The celebrity bakers will take on a signature sandwich biscuit, a sweet bread-based technical and a cake showstopper revealing their favourite guilty pleasure.

The foursome will compete for praise from Paul Hollywood and Pru Leith in the fifth episode of the series.

Hosted by Sandi Toksvig and Noel Fielding, the star-studded spin-off of the Great British Bake Off is in aid of Stand Up to Cancer, encouraging viewers to donate and get baking themselves in aid of charity.

The pressures of the Bake Off tent can sometimes get a bit too much, with last week’s winner Joe Sugg having fainted after cutting his finger during the first challenge.

Robert Rinder, perhaps best known for hosting daytime courtroom show Judge Rinder, admitted he indulged a little too much on one ingredient during filming.

Robert admitted: “I brought some wine to decorate my cake, but I thought it would go to waste on my cake, so I drank most of it.”

However, due to Celebrity Bake Off airing before the watershed viewers might not get to see the TV judge looking tipsy.

Robert said: “Because it was on before 9pm, they weren’t able to show me quite as drunk as I was.”

He revealed his symptoms included a continuous cough and a high temperature.

Robert also told of how his grandfather had died from coronavirus.

On Good Morning Britain Robert said: “My grandfather, who was 92, passed away two nights ago of this terrible disease, and the thing is, he survived the Second World War and he was a man that was determined to see joy in the world.”

Despite the tragedy, Robert told viewers to talk about the virus “in a responsible way”.

He said: “As much as there is terrible and appalling news, we need to remember that there are thousands of people who are recovering from this disease every day.”

Celebrity Bake Off is on Channel 4 at 8pm tonight.