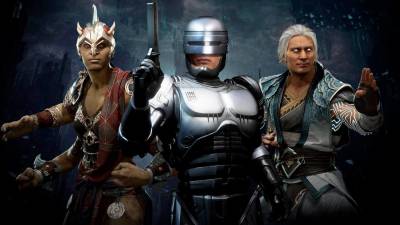 EQUIPPED with a metallic shield and an Auto-9 handgun, chrome dome himself becomes the third movie character to guest in “Mortal Kombat 11”, and the third such guest defying his evil origins.

The famously violent fighting game is preparing to deploy a new expansion, Aftermath, on May 26, 2020, which will further extend the launch edition’s storyline and character roster.

Franchise returnees Fujin (the god of wind) and Sheeva (a four-armed half-dragon queen) are also part of the roster expansion, as shown in a new trailer.

RoboCop, meanwhile, is only glimpsed at the trailer’s close, but is being voiced by Peter Weller, lead actor from the 1987 movie and its 1990 sequel.

Like Spawn and The Terminator, the movie character of RoboCop rose beyond his fictional creators’ intentions to become a hero; the trio stand in opposition to previous franchise guests Freddy Krueger (”Mortal Kombat”, 2011), the Alien, Jason Vorhees, Leatherface and the Predator (”Mortal Kombat X”, 2015).

“Mortal Kombat 11” and the add-on are also being made available in a May combination pack, the Aftermath Kollection.

Like several “Mortal Kombat 11” guest characters, RoboCop could be returning to cinema before too long.

After a “RoboCop 3” in 1993 and a rebooted “RoboCop” in 2014, which was given a mixed reception, “RoboCop Returns” is thought to be the next stop for the law-enforcing machine man, with Abe Forsythe of zombie comedy “Little Monsters” currently in the director’s seat.

The Terminator made its own theatrical excursion in 2019 through “Terminator: Dark Fate,“ while, following the success of October 2019’s “Joker” movie – the Joker was also a “Mortal Kombat 11” character – a new “Spawn” adaptation has gone back into development.

In much the same vein, “Mortal Kombat” itself is heading back to theaters (or their digital substitutes) in due course.

With a release date of Jan 15, 2021 so far unswayed by coronavirus conditions, the new “Mortal Kombat” wrapped in December 2019 ahead of a post-production process.

It marks the feature debut of commercials director Simon McQuoid and is being co-produced by James Wan of “Saw“, “The Conjuring“, “Furious 7” and “Aquaman“, with some of its stars now doing double duty in “Mortal Kombat 11”. – AFP-Relaxnews