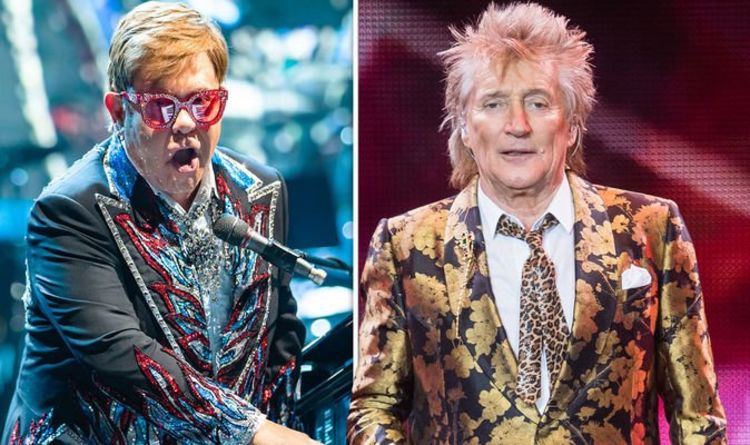 Singer Sir Rod Stewart, 74, joined presenter Johnnie Walker in the studio to discuss his career and upcoming tour. The presenter asked him what he was thinking when he agreed to a world tour at the age of 74.

The Maggie May hitmaker replied: “I mean, it’s written all over my face when I’m on stage how much I love it.

“I earned little money doing it and I enjoy it, so why would I give it up?”

Jonnie then asked Rod if he’s in competition with his fellow singer Elton John.

He swiftly replied: “Elton is finishing,” which appeared to puzzle the presenter.

Moving on swiftly, Johnnie went on discuss the pair’s nicknames.

In the past, Rod has said the duo are referred to as Phyllis and Sharon.

Johnnie then highlighted that Elton had sang to an audience of one million people in the past.

Comparing this to Rod’s biggest gig, he told listeners the singer had sung in front over two million more people than Elton.

Speaking to Dermot O’Leary in BBC Two show Reel Stories, he said: “We’re not talking nowadays. He has got the hump with me now.”

Dermot asked the hitmaker whether any issues between them could be resolved over a phone call, to which Sir Rod said they are both stubborn.

“Yeah, it could, but we’re both very stubborn, so neither of us call each other,” he replied.

Back in November, Sir Rod said of his friend: “I do love Elton, only we’re not talking at the moment. We’ve had a spat.”