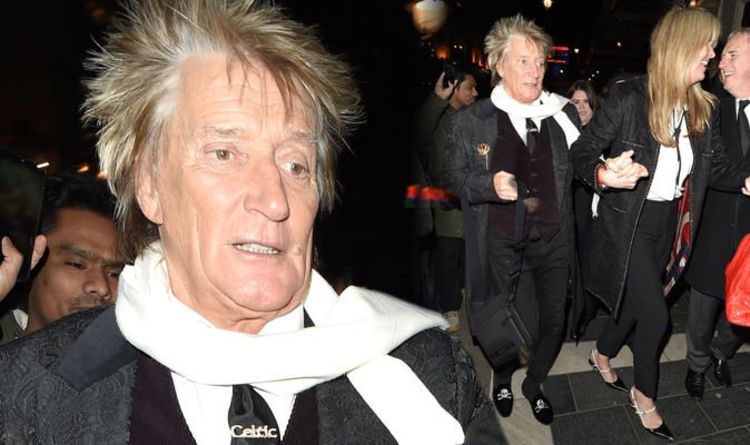 Sir Rod Stewart, 75, headed to London yesterday to rehearse for tonight’s Brit Awards 2020 and looked a little downcast when he was photographed later in the evening.

The singer, who will be closing the show at the music ceremony, made the most of his time in the Capital by taking his wife Penny Lancaster to the theatre after a run through of his set.

Rod and Penny were snapped making their way to the Gielgud Theatre in Soho to see the press performance of The Upstart Cow.

The couple, who have been married for 13 years and share two sons together, Alistair, 14, and Aiden, 9, wore coordinating his and hers outfits for their night out.

Rod looked dapper in a three-piece black suit with white scarf around his neck, while Penny also sported a stylish monochrome look.

She teamed her classic white shirt with a black ribbon and completed her outfit with cropped trousers, pointy pumps and a red designer bag.

The pair held hands as they made their way to the venue for the show.

Rod was recently charged with battery following an altercation with a security guard in Florida on New Year’s Eve.

The singer and his son Sean, 39, were accused of assaulting security guard Jessie Dixon, 33, after they were allegedly refused entrance into a private party at a hotel.

Both Rod and Sean pleaded not guilty to the claims.

A pretrial hearing is now scheduled for April.