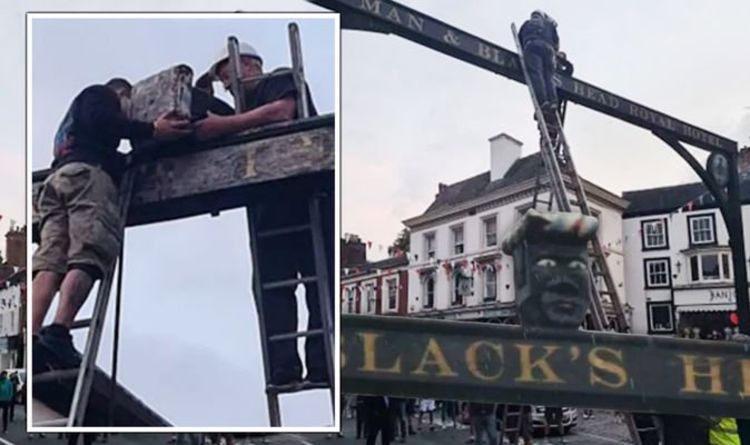 Thousands of people signed a petition demanding the removal of the sculpture on the 200-year-old sign for the Green Man and Black’s Head inn in Ashbourne, Derbyshire. Derbyshire Dales District Council had agreed to take the head off the sign with “immediate effect” but a group of locals got there first and removed it last night, claiming they had received permission to do so and insisting they planned to protect and restore it.

Around 50 people gathered to see the removal of the historic wooden caricature from its prominent position in the town centre.

Resident Mark Redfern said: “The head will be restored while on the ground and returned to its position at a later date. Local councillors were also there too.

“Saved by the people of Ashbourne.”

Mr Redfern said the head would be given “a lick of black paint” and claimed the move was to save it from vandalism.

A Change.org petition denouncing the head’s “disgusting racist imagery” and calling for the its removal had amassed more than 35,000 signatures by last night.

The Grade II-listed pub sign, which arches over Ashbourne’s St John’s Street, depicts the face of a black man, which one 20-year-old anthropology student from the town said resembled a golliwog, a 19th-century rag doll which is considered racist.

She said: “I think people are ashamed of it.

“Having it in the middle of the street in a small town is so unwelcoming.

“It should have been taken down a long time ago and put in a museum.”

“I think it’s important we address our history; we can’t change it but this shouldn’t be displayed in the public eye.

“It should be in a museum where we can learn about it with a description to contextualise it.”

Their demands prompted Derbyshire Dales District Council’s decision to remove the monument from the sign.

A council spokesman said earlier: “We’re removing the head from the sign with immediate effect.

“We agree that the sign itself is not only a public safety concern right now, but that this is an issue that requires urgent discussion and consultation.

“The sign was gifted to the district council a number of years ago and is currently protected by a Grade II structure listing.

“Legally, only Heritage England or the Secretary of State can remove this listing, which means we need to take on board the views of our own councillors and local people before taking forward any representations. This will happen soon.”