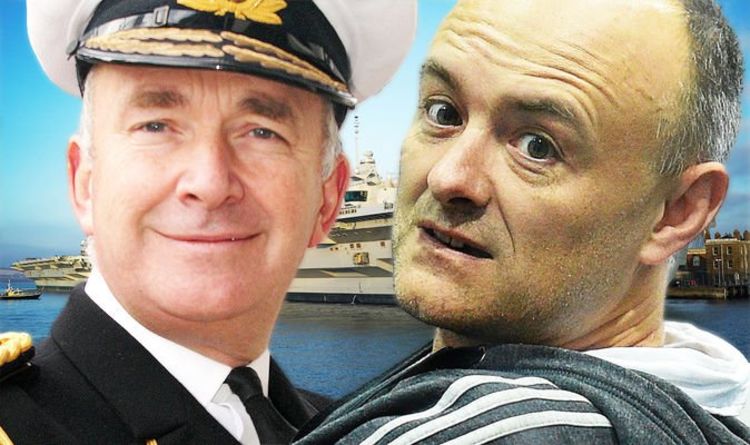 Dominic Cummings has been critical of the Ministry of Defence on his blog and has subsequently called for a review into the department. He has also hit out at spending, deriding the Royal Navy’s newest aircraft carriers – HMS Prince of Wales and HMS Queen Elizabeth – as a waste of money and questioning their ability in the battlefield. But Labour peer Admiral Lord Alan West has swiped back at the former Vote Leave director, claiming “he knows nothing” about defence and defending the quality of the Navy’s latest additions.

Lord West told Express.co.uk: “Well I think Cummings knows nothing about defence and I think he has said that the new vessels can’t fight in a big war.

“Well when we have got those carriers worked up with a full complement of aircraft I would be happy to take on pretty much anyone in the world and win – and come back in time for tea and medals, no doubt about it.

“And I have done a lot more fighting than Cummings has.”

A comment from Mr Cummings that Lord West took issue with in particular was his accusation that the MoD is “corrupt”.

In a blog post from March, he said: “The officials in charge of multi-billion processes are mostly mediocre, often appalling.

“In the MoD corruption adds to the problems.”

Lord West told Express.co.uk that there are areas in the Defence Ministry that should be improved, but that this kind of statement helps nobody.

He said: “Well I don’t think that. There is no doubt that in the procurement area improvements could be made, the review is a good idea but it’s no good making wild statements like that.

“He might make the odd statement, but that’s not true and that’s not real. I hope he is just saying that to try and shake things up.

The Downing Street aide continued: “A teenager will be able to deploy a drone from their smartphone to sink one of these multibillion-dollar platforms.

“Such a teenager could already take out the stage of a Downing Street photo op with a little imagination and initiative, as I wrote about years ago.”

But Lord West has claimed that the two vessels are of such high quality, the US forces are looking on in envy.