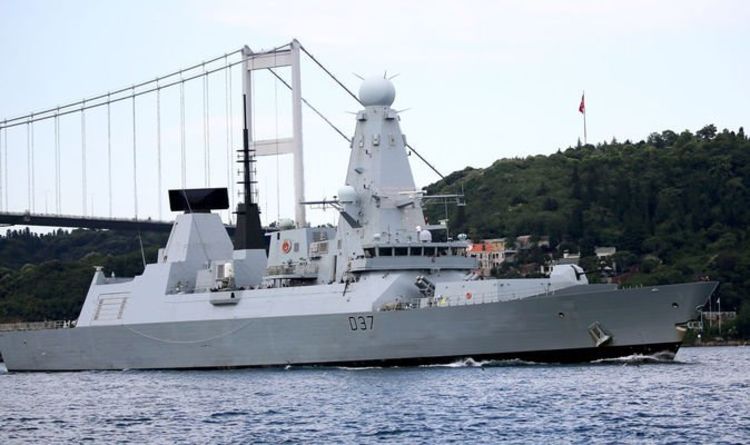 After searching the waters for smugglers and traffickers for a day, the elite team found 11 bags of crystal meth with a street value of millions. Spotted in the early hours of the morning, the odd-looking dhow – which is a lateen-rigged ship – flew no flags and showed no signs of fishing, raising major red flags for the surveillance team. Royal Marines were then sent over in boats to secure the dhow and its crew before Royal Navy sailors carried out a search.

A statement from the Royal Navy outlined the findings of that team showing the seizure of 11 mail-bag sized sacks weighing up to 20kg each.

Lieutenant Ben Clink, in charge of the Royal Marines on the HMS Defender said: “After all the training and preparation, it was fantastic to have the opportunity to demonstrate our capability with a successful boarding.
“It’s the best Christmas present we could hope for.”

The destroyer’s Commanding Officer, Richard Hewitt, said: “I am really proud that HMS Defender has been able to interdict such a significant quantity of drugs and prevent it reaching UK streets.

“It goes to show that even over the festive season, the Royal Navy is at sea 24/7 protecting the UK’s interests.

“This has been a real boost for the ship’s company as they face Christmas away from their loved ones.”

The HMS defender spends most of its time in the region safeguarding merchant shipping entering and leaving the Gulf through the Strait of Hormuz.

“Proceeds from the sale of these drugs is known to fund organised crime and terrorism.”

A total of four men and two women were also arrested in Holland by Dutch police on European Arrest Warrants.

The NCA said “the full extent of the drug trafficking operation” was uncovered during the operation to intercept three huge drugs consignments in September 2018.

Of all the drugs seized the total value was said to be a staggering £38million.

“Stopping criminals who don’t care about the damage they are causing in communities, and the children being exploited by County Lines drug dealing, is an absolute priority.

- Advertisement -
- Advertisement -
Facebook
Twitter
Pinterest
WhatsApp
Linkedin
ReddIt
Email
Tumblr
VK
Previous articleTravellers to fork out up to £121 at UK airports this Christmas – would you pay it?
Next articlePS Plus January 2020 free PS4 game DELAY: Fans face long wait for PlayStation Plus reveal