‘Rude to the Queen’ Fury at Meghan’s attack on monarchy... 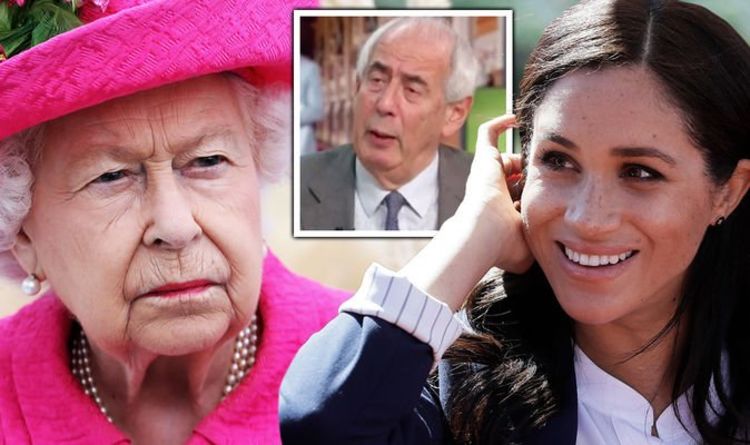 Meghan Markle, 38 and Prince Harry announced last week they would not be using the Sussex Royal brand as they make plans to move to Canada and take a step back from royal duties. Making a statement about the exclusion of their royal namesake on Friday, royal biographer Tom Bower told Good Morning Britain their decision was a mark of disrespect to Queen Elizabeth II.

The royal biographer said as he hit out at the Duchess of Sussex: “That statement was really spiteful fury by Meghan.

“What Meghan wants, Meghan gets,” he blasted, to which Turnbull asked: “What’s was spiteful about it?”

“Well, to be rude to the Queen,” Mr Bower continued. “What was spiteful was she married into the royal family not so long ago, she knew exactly the terms, she wanted to bail out.”

Mr Bower added: “And, she wants to bail out on her own terms.

“What’s most precious for this country is to protect the reputation of the royal family and they want to go freelance and do charity and earn millions of dollars by marketing themselves, using their title.”

Reid said: “But Tom, what might have been spiteful was if they said actually the Queen has no jurisdiction and we are going to continue using the title ‘royal.’

“But they didn’t say that, they said we are no longer going to use the term,” she continued, to which the royal biographer hit back: “But it was a threat wasn’t it.”

Defending Meghan, Ms Adom told Mr Bower: “I think what is spiteful in this instance is the way this whole statement has been interpreted.

“No other part of the statement has been talked about where Harry talked about the work he is going to continue doing on the armed services and the Invictus Games.

“Nobody is talking about the fact they said they want to remain working with the Royal Family, with the Queen but they are not going to do that.

“It would be spiteful if they said they are going to use the term royal anyway – it was a statement, it was very, very factual. There was no emotion in there.”