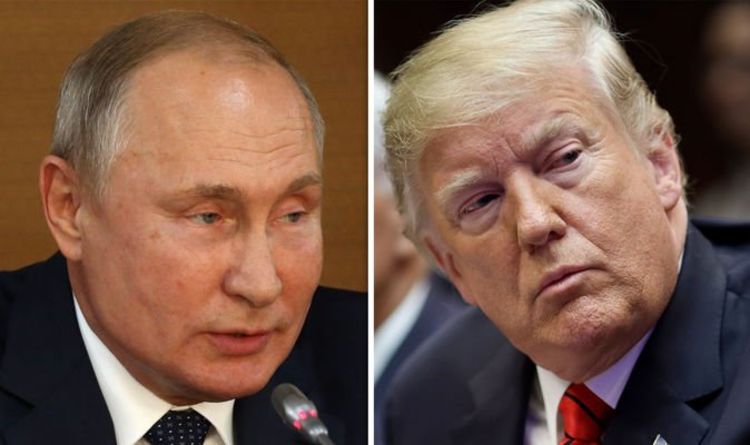 Dmitry Medvedev made the remarks in an interview with Serbian newspaper Vecernje Novosti. Mr Medvedev was President of the Russian Federation between 2008 and 2012, swapping roles with Vladimir Putin after the latter was barred due to term limits. He explained: “No one denies that Russia has own interests related to ensuring its security.

“We are a large country, we are a nuclear state, and the desire to place NATO bases in our immediate vicinity obviously cannot fill us with positive emotions.

“We have always responded and will continue to respond to this, both politically and in a military sense.”

He warned NATO to think twice before adding certain nations into the group stating: “All attempts to drag countries with internal conflicts into NATO are extremely dangerous.

“You mentioned Bosnia and Herzegovina, the Republika Srpska, but we can also name other countries.

It was set up in 1949 and features both the United States and the United Kingdom.

Bosnia and Herzegovina, Georgia, North Macedonia and Ukraine are recognised as aspiring members.

He continued: “But in fact, it is precisely these US aspirations to dominate the whole world, including the Balkans and Europe, that cause the main harm.

“By the way, Europe itself is tired of these aspirations, or these desires.”

Britain’s Defence Secretary Ben Wallace recently gave a speech at NATO’s parliamentary assembly in which he praised the alliance.

He asserted: “Seventy years ago, a group of 12 nations came together to establish our Alliance.

“They did so to protect their common values and the freedoms so recently won in the Second World War.

“The then common need of the founding members; as is it is now; is not one of offence but of defence – mutual self-defence.”

He added: “NATO members chose freedom and democracy to be our guiding principles.”

He concluded: “I am proud of what we have all achieved together and I am determined that under the leadership that I give to the Ministry of Defence, we will continue to contribute to NATO’s readiness, deployments and thinking.

“What ever happens over Brexit our moto will be that security is not a competition it is a partnership.”

Mr Wallace was an army captain and served during the Northern Ireland conflict, where he was mentioned in dispatches to high command praising his conduct.