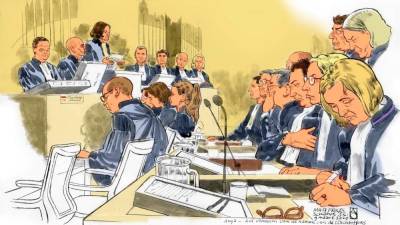 BADHOEVEDORP: Dutch prosecutors accused Russia on Tuesday of interfering with the probe into the downing of flight MH17 and casting a “dark shadow” over the trial of four suspects in the disaster.

Moscow had tried to track down witnesses in the trial that started on Monday in the Netherlands, leaving some in fear for their lives in case they were identified, prosecutors said.

Three Russians and a Ukranian are on trial over the 2014 crash of the Malaysia Airlines jet in rebel-held eastern Ukraine with the loss of all 298 people on board, 196 of them Dutch.

“There are clear indications that Russian security services are actively attempting to disrupt efforts to establish the truth behind the shooting down of flight MH17,“ prosecutor Thijs Berger told judges.

Russia had also targeted investigators in several countries affected by the disaster, the prosecutor told the second day of the hearing at a high-security court near Amsterdam’s Schiphol airport.

“The British and Dutch authorities have determined that Russian GRU agents were involved in attempting to hack into the systems of the Malaysian investigative authorities,“ Berger said, referring to Russia’s military spy agency.

There had also been attempts to hack into the Dutch Safety Board which was probing the MH17 disaster, he said.

“Seen as a whole, this information casts a dark shadow over these proceedings,“ Berger said.

Relatives of those who died have repeatedly called for the trial to examine the role of Russia in the crash, which investigators say was caused by a Russian-made missile fired from separatist territory.

“The court has made it crystal clear that the Russian government is staging a campaign of disinformation,“ Anton Kotte, a board member of a foundation for MH17 victims who lost his son, daughter-in-law and grandson, said Tuesday.

“And we will have to be prepared for much more distortion of the truth as the case proceeds.”

Prosecutors described fears that Russia was trying to trace potential witnesses in the trial, some of whom will give anonymous testimony.

“The use of Russian security services to discover the identify of witnesses in this investigation is a very real scenario. These agencies have the capability to intercept communications and monitor people’s travel movements,“ Berger added.

“Several witnesses in this investigation say that they fear for their lives if their identities were to come to light.”

The prosecutors added that Russian security services were already “accused of multiple murders that have been committed in various European countries”.

Special protection had been given to one witness, who was willing to be named later in the proceedings but was remaining anonymous for now given security concerns, prosecutors said.

Only referred to as M58 at this stage, the witness was a Russian volunteer attached to a separatist unit who was close to the BUK when it was launched on the day MH17 was shot down.

The witness had testified that Russian military personnel – whom separatists said were from Russia’s FSB security agency – were with the missile at the launch site, they added.

“Once it became clear in the following hours that it was not a military aircraft but civilian flight, MH17, the disinformation campaign started immediately,“ prosecutor Dedy Woei-a-Tsoi said.

Another witness identified only as S24 had “expressed a fear of reprisals by the Russian Federation” while a third known as V9 said asked to remain anonymous because “I might get picked up by Russian special services,“ the prosecution added. – AFP