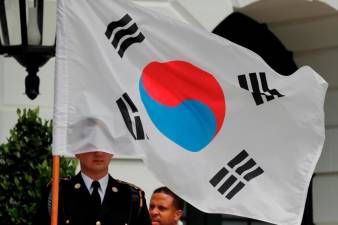 SEOUL: South Korea announced a stimulus package of 11.7 trillion won ($ 9.8 billion) on Wednesday to cushion the impact of the largest outbreak of coronavirus outside China as efforts to contain the disease worsen supply disruptions and sap consumption.

“As we understand that the economy is in a state of emergency, we are putting all our policy focus on minimising the economic fallout, especially for the vulnerable sectors, small- to medium-sized businesses and self-employed people,“ Hong told a news conference.

The flu-like virus, which originated in China, has killed more than 3,000 and roiled global financial markets as investors and policymakers brace for a sharp knock to world growth.

South Korea has the most cases of infections outside the mainland, weakening consumption and prompting Bank of Korea Governor Lee Ju-yeol to issue a warning last week that Asia’s fourth largest economy could contract in the first quarter.

About a dozen brokerages from BofA Securities, Capital Economics to Goldman Sachs now see South Korea growing at a slower pace than last year’s paltry 2.0%, which was the worst growth since the global financial crisis.

An additional 10.3 trillion won in treasury bonds will be issued this year to fund the extra budget. The extra budget is slightly larger than the 11.6 trillion won package introduced during the 2015 Middle East Respiratory Syndrome outbreak.

The government aims to present a finalised supplementary budget to the National Assembly on Thursday.

Some 2.3 trillion won will be allocated to medical institutions and fund quarantine efforts, with another 3.0 trillion won going to small- to medium-sized businesses struggling to pay wages to their workers, and child care subsidies, the finance ministry said.

Loans will be made on relaxed terms to affected exporters while people who have lost their jobs will be re-trained.

Government debt will increase to 41.2 percent of GDP, or 815.5 trillion won, after the supplementary budget, the ministry forecasts, compared with 39.8 percent of GDP projected earlier. -Reuters