Sadiq Khan lashes out at Piers Morgan in face mask row 'I was outdoors and distanced!' 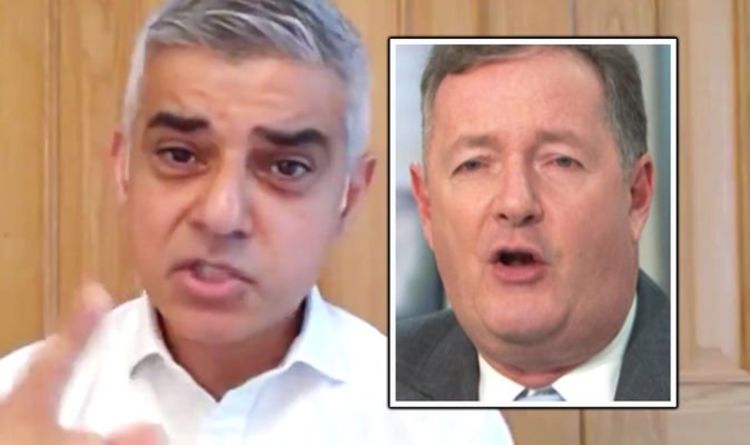 Sadiq Khan MP was on Good Morning Britain discussing how Londoners and the rest of England will be joining the other nations in wearing face masks and coverings in shops and supermarkets after Prime Minister Boris Johnson made it compulsory from July 24. Kicking off the interview, presenter Kate Garraway gave the London Mayor the chance to explain the situation he was in on Friday, whereby video footage was posted to social media showing him partaking in an interview, talking about the importance of face masks and not wearing one himself. Resident host GMB Piers Morgan blasted the politician and today, Khan hit back.

“You yourself has received some flack – maybe unfairly – because you’ve been pictured not wearing one sometimes and yet advocating wearing them at other times,” Garraway began.

“Good morning Kate, so I’m at home now in South London,” Khan reasoned, explaining why he wasn’t wearing a mask since he was indoors.

“I think your colleague Piers Morgan criticised me because on Friday, I was at Applebee’s in Borough Market,” Khan added.

“But I was socially distancing and I was actually there to promote the wearing of face coverings in shops and indoor confined spaces where it’s not possible to keep your distance.

“And this one small thing, in addition to other measures can make a big difference in reducing the spread of the virus,” Khan argued.

It comes after Morgan took to Twitter and retweeted the video which shows Khan expressing his opinion on wearing face masks and coverings in indoor spaces and shops.

Morgan wrote alongside the tweet: “He says, wearing no mask.”

Express.co.uk has contacted Morgan’s representative for a follow-up comment.

Since mid-May, the public have been advised to wear a face-covering of some sort in enclosed public spaces.

For transport, it has been compulsory in England since 15 June.

Those who now fail to comply with the new rules will face a fine of up to £100 which is set to be policed by transport and retail staff.