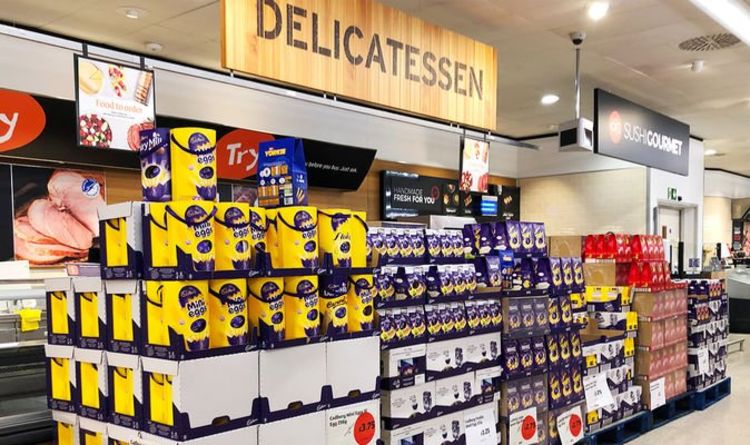 Simon Roberts, chief executive of Sainsbury’s, said: “We are talking to colleagues today about where the changes we are announcing in Argos standalone stores and food counters impact their roles.

“Right here and now, I and all the team are focused on supporting and delivering for our customers in the days and weeks ahead.”

The grocer posted a pre-tax loss of £137million for the year to September 19.

READ MORE: Morrisons to offer customers 10% discount on food shop – how to redeem

Almost 40 percent of the supermarket’s sales are now online, compared to 19 percent a year ago.

Simon added: “Investments over recent years in digital and technology have laid the foundations for us to flex and adapt quickly as customers needed to shop differently.”

By the end of the restructuring programme, which will be by 2024, Sainsbury’s said it expected the total number of standalone Argos outlets to be around 100.

The retailer is yet to announce which Argos stores are to be affected.

Simon added: “Investments over recent years in digital and technology have laid the foundations for us to flex and adapt quickly as customers needed to shop differently.”

Sainsbury’s added that it had hired 52,000 people since March due to the demand of groceries and household items.

Workers losing their jobs in the Argos stores and on supermarket counters will be offered new roles within the store.

The CEO continued: “Whilst we aim to find alternative roles for as many colleagues as possible, around 3,500 of our colleagues could lose their role as a result of our proposals.

“Including these proposals, we expect to increase our colleague population by 6,000 roles by the end of the financial year.”

The retailer also promises to place more price cuts across staple foods to help shoppers during this hard time.

The announcement of the news comes just a day after John Lewis announced it was cutting 1,500 jobs at its head office and Lloyds Banking Group said 1,070 roles were to be cut.

More than 200,000 potential job losses have been announced across sectors including banking, hospitality, travel and retail since the start of the pandemic.