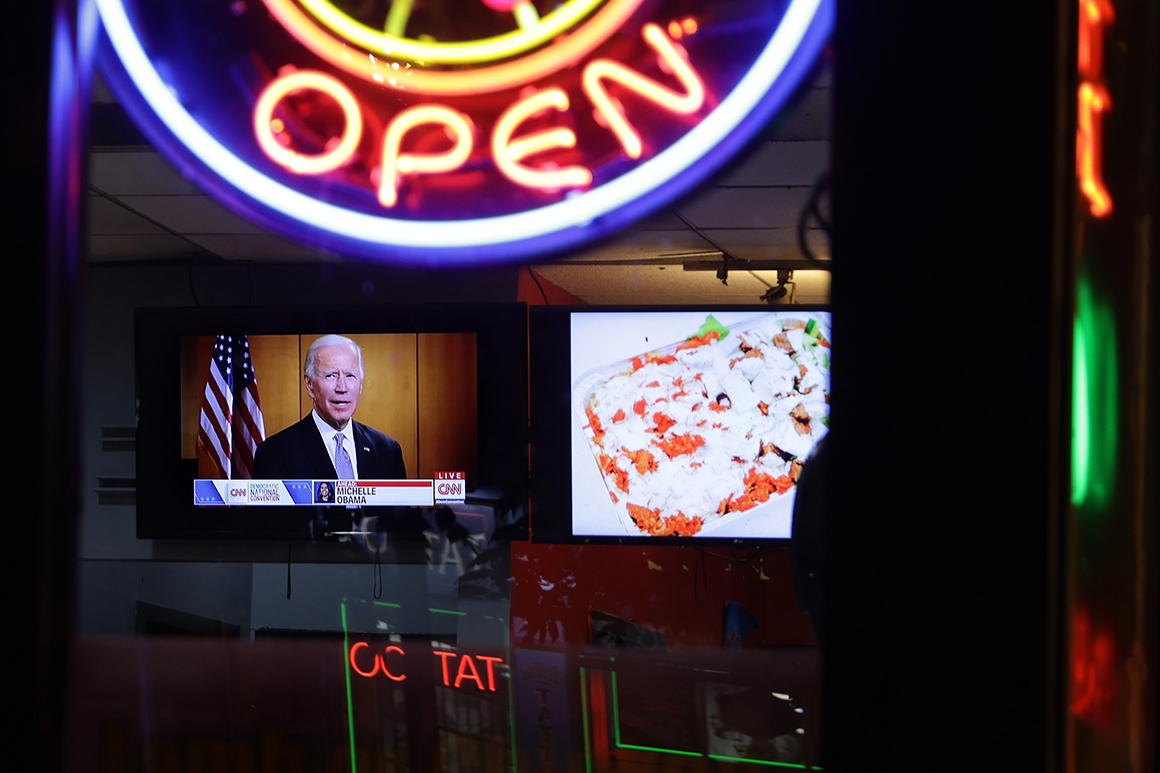 So far, Democrats have effectively framed this election as a referendum on Donald Trump. And as they opened their virtual, made-for-Covid-19 convention Monday, they settled in for a weeklong battering of the Republican president, content to let the contrast define their own, imperfect nominee.

The primary purpose of the proceedings Monday was to demonstrate the breadth of Biden’s support. Former Ohio Gov. John Kasich was among a clutch of Republicans who endorsed Biden, within the same hour of programming that Sanders, a self-described democratic socialist, did the same.

Contrast those superlatives with Obama’s speech four years ago for the nominee, Hillary Clinton, one of the most rousing addresses of her career. That year, Obama heralded Clinton as the reason her own daughters take for granted that a woman can be president. Her admonishment that “when they go low, we go high” ended up on T-shirts and inspired a Kelly Clarkson song.

On Monday, she called Biden a “profoundly decent man.”

Biden should put exactly that on a bumper sticker. Democrats know — and polling shows — that Biden’s supporters aren’t nearly as enthusiastic as Trump’s. But there are more of them. And unlike Trump, Biden hasn’t been crippled by his handling of the coronavirus pandemic or its economic wreckage. Biden is leading Trump by a wide margin nationally, and he continues to lead Trump in swing states.

The message on Monday, said Doug Herman, who was a lead mail strategist for Barack Obama’s 2008 and 2012 campaigns, is that Biden is “simply better than the guy killing Americans at a record pace.”

In other words, Democrats believe that Biden is acceptable. And what the opening night of the convention laid bare is that for Biden, broadly acceptable is probably good enough.

Four years ago, Democrats’ needed more from their convention. Battling lower favorability ratings, Clinton entered the party’s national gathering just as Trump had pulled ahead of her in polls. Sanders delegates, still not over their defeat, were protesting in the streets.

That year, Sanders offered Clinton the same endorsement he gave Biden on Monday. But at a time when she needed validation, moderates grumbled that the Vermont senator focused too intently on Trump. Flash forward four years and all those moderates wanted him to talk about was the president.

“Nero fiddled while Rome burned. Trump golfs,” he said, in a line made possible only by Trump’s incumbency.

The format of the convention, too, appeared to benefit Biden. Many Democrats had anticipated the dynamics of the virtual convention could be awkward. The Biden campaign was preparing to stage drive-in viewings of the convention in some cities, and Kate Bedingfield, Biden’s deputy campaign manager and communications director, said the candidate is expected “to make some surprise appearances throughout the week.”

But glitches were rare. And even if they weren’t, it likely would have been better for Biden than the alternative — a less predictable, more volatile crowd.

Though Sanders’ supporters broadly have coalesced around Biden, activists are a different breed. On Monday, the Bernie Delegates Network said that it had conducted a survey of Sanders delegates to the convention, finding one-third “strongly disapprove” of the Biden-Kamala Harris ticket, while more than 40 percent “somewhat disapprove” or are “ambivalent.”

Still, in a virtual convention, no one will see them. There was no booing of Debbie Wasserman Schultz, the former Democratic National Committee chair, off the stage — or anyone to boo anyone at all. There was no Sarah Silverman-like taunting of the left. Did anyone know Rep. Rashida Tlaib cast her ballot for Sanders and voted ‘No’ on the Democratic Party platform? In a two-hour, made-for-Covid special, it hardly mattered what was on her Twitter feed.

As the convention unfolded, Paul Maslin, a top Democratic pollster who worked on the presidential campaigns of Jimmy Carter and Howard Dean, said in a text message, “I was skeptical. But I think this is working. On message, that’s for sure. We the people. All of us. Including Republicans!!”

Following Sanders’ speech, network television viewers saw shots of delegates applauding from their homes — not the stands full of disaffected activists filmed teary-eyed as they were in 2016.

At a virtual conference for progressives coinciding with the convention, Kai Newkirk, a Sanders delegate from Arizona, described the moment Sunday as requiring progressives to “hold a kind of despair and grief,” but also a “hope and a sense of responsibility and determination.”

“It’s very painful to reckon with that loss,” he said. “At the same time, we have to be able to grieve that, to be able to accept it, and to take responsibility to deal with the situation as it is.”