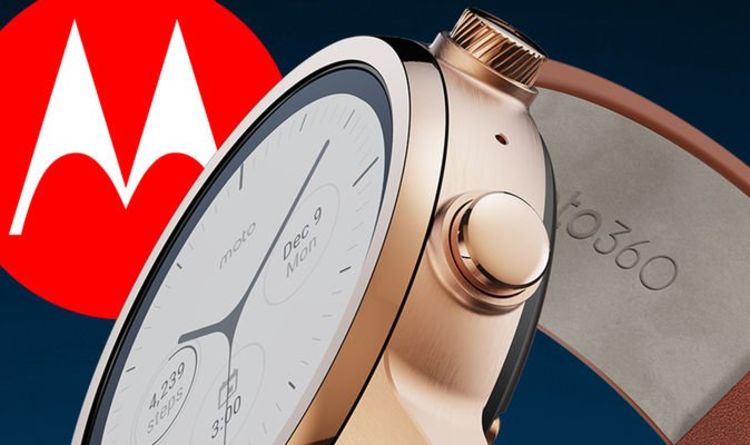 Instead, those duties have been left with eBuyNow eCommerce Ltd, a firm that’s previously partnered with tech brands such as Microsoft, Samsung, Panasonic, and Toshiba.

That said, from the outside, you’d struggle to tell that this new gadget isn’t from the same team that built the original round-faced watch.

The new Moto 360 retains the same circular case design that made the original so distinguishable back in 2014. The techy timepiece boasts a 42.8-millimetre case made of stainless steel and a vibrant 1.2-inch AMOLED display.

Unfortunately, the wearable doesn’t come with a completely all-screen design à la Apple Watch Series 5. Instead, it comes with a noticeable border that makes its display feel smaller than it is, just like Samsung’s Galaxy Watch Active 2.

However, the panel does offer always-on functionality which is greatly appreciated.

Express.co.uk has already been hands-on with the new Moto 360 and can confirm it sits well on the wrist. The device is thicker than the likes of the slick Huawei Watch GT 2, but it’s certainly not unwieldy.

And unlike the Galaxy Watch, Motorola is bundling in a leather and rubber strap in the box, so you’re already kitted out for glitzy nights out and intense gym workouts.

While Samsung ousted its famed rotating bezel with the release of its Galaxy Watch Active 2 in favour of touch gestures, Motorola is sticking with physical hardware to navigate the 360.

The Moto 360’s top button can be rotated to elegantly glide through Google’s Wear OS. The experience of using the button is certainly reminiscent of Apple’s Digital Crown.

Motorola has heralded the timepiece’s new processor as its most compelling feature. Housed inside its stainless steel case is Qualcomm’s new Snapdragon Wear 3100 silicon that delivers rapid performance across Wear OS.

Much to our excitement, the Illinois firm hasn’t done much to diverge from Google’s stock Wear OS platform. That means you’ll be using the operating system as Google intended, not with a tacky skin over the top.

Wear OS is certainly outclassed by Apple’s watchOS in terms of sheer functionality. But it’s still well equipped to do most tasks you’d expect, such as replying to a text message, skipping a song on Spotify and getting directions via Google Maps.

Of course, the Moto 360 comes with a heart rate monitor built-in so you can track your heart rate during intense workouts, or after you’ve just sprinted to make your morning commute…

The wearable is water-resistant, too. So you don’t have to worry about your timepiece going haywire if you wear it in the rain, either.

Moto 360 is fitted with a 355mAh battery Motorola promises will be enough to keep it on all day. When you do need to find a plug, the 360 can be charged to 100 percent in just an hour.

Motorola seems to have nailed most aspects of the new 360… except the price. The wearable will cost an eye-watering £339.99 when it launches in December, that’s £50 more than Samsung’s Galaxy Watch Active 2 and only £60 less than the all-singing, all-dancing Apple Watch Series 5.