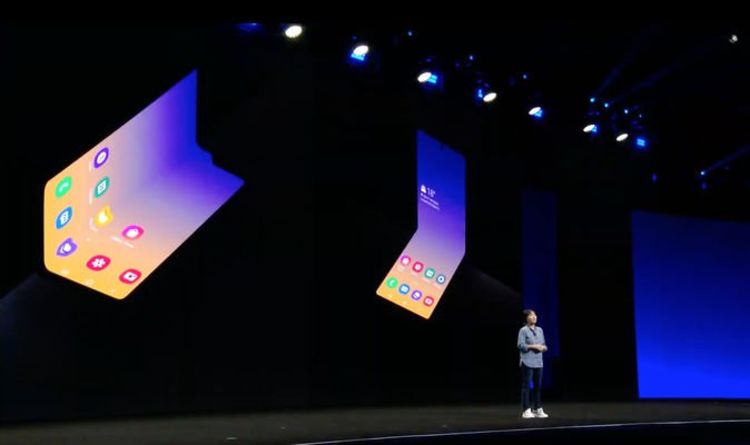 The two-day event enables Samsung to serve-up an early look at its forthcoming software updates and integrations so that app developers can implement the changes ready for the next major update to the Samsung Galaxy S10, Note 10, Bixby smart assistant, or more.

After talking about some improvements to its Knox security protocol that secures payment data and sensitive information on its smartphones, Samsung started to address its next major mobile operating system update, known as One UI 2. This incorporates features from Google’s Android 10 update, which rolled-out to Pixel and OnePlus smartphones earlier this summer.

During the keynote presentation, Samsung talked about the future of foldables and showed a preview of new kind of Infinity Flex design which has a horizontal fold across the middle. This is the exact opposite of the Galaxy Fold, which folds like the inside pages of a paperback novel.

Unfortunately, Samsung stayed pretty tight-lipped about what we were looking at during the keynote.

Sally Hyesoon Jeong, Head of Framework R&D Group for Mobile Communications at Samsung, said: “The amazing thing about foldable technology is that it can also become more compact. This brand-new form factor that we’re now exploring not only easily fits in your pocket, but it also changes the way you use your phone. Even the way you take photos, or videos.

“As a pioneer in the foldable category, we not only understand that every innovative form-factor requires an equally innovative user experience. That’s why we need your creativity to bring this new generation of technology to life.”

Unlike the Samsung Galaxy Fold, which has a curved notch in the top right-hand corner of its folding touchscreen, known as the Infinity Flex, this new as-yet unnamed handset has a small centralised cut-out for the selfie camera, exactly like the Galaxy Note 10 and Note 10+.

Because of the way it folds, the new Samsung smartphone has a tall, elongated touchscreen. Held in landscape, it could be the ideal device for watching movies and bingeing cinematic box sets on-the-move. But held in a portrait orientation, the display could be suited to running multiple apps at the same time, stacked on-top of one another – something One UI is more than capable of.

Motorola is widely-believed to be working on a very similar design for a re-imagined version of its iconic Razr flip-phone design which debuted in late 2005, but rather than sporting a keypad and screen – it will have a single, uninterrupted foldable OLED that unfurls when you flip open the smartphone.

According to a source speaking to CNET, we’re likely to see the new Motorola Razr in December 2019. That means Motorola will be able to achieve its promise of launching a foldable handset no later than everybody else in the market.

Otherwise, if the release date was always planned for late December, the Chicago-based company’s promise of launching no later than rivals seems a little disingenuous.

With Samsung also preparing developers to built software experiences for its smartphone, the ball is now firmly in Motorola’s court. We’ll keep you posted as soon as we hear anything from either bendable blowers.