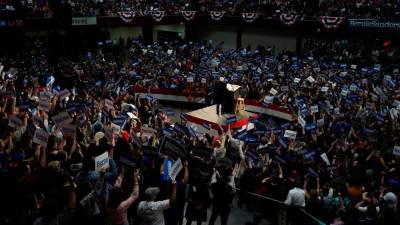 WASHINGTON: Bernie Sanders will look to take command of the Democratic presidential race when 14 states vote on Tuesday, while top rival Joe Biden aims to gain ground by muscling aside upstart Michael Bloomberg and consolidating moderate support on the nominating campaign’s biggest day.

In Super Tuesday contests that stretch from tiny Maine in the east to the delegate-rich prize of California in the west, the Democratic battle to find a challenger to Republican President Donald Trump in the Nov 3 election will become a national competition for the first time.

The rush of primary elections could provide some clarity at last in a muddled White House race that has seen several candidates rise and fall, leaving many Democratic voters torn and uncertain.

Sanders, the front-runner and a progressive senator from Vermont, hopes to take a huge step toward the nomination on Super Tuesday, when more than one-third of the delegates who pick the eventual nominee will be up for grabs.

But Biden has emerged as Sanders’ top threat. The former vice president’s big win in South Carolina on Saturday generated a flood of endorsements from party officials worried that Sanders’ democratic socialist proposals to restructure the economy would doom the party in November.

Biden gained fresh momentum on the eve of Super Tuesday as moderate presidential rivals Pete Buttigieg, the former mayor of South Bend, Indiana, and Senator Amy Klobuchar of Minnesota, withdrew from the race and endorsed him.

“I’m looking for a president who will draw out what is best in each of us, and I’m encouraging everybody who was part of my campaign to join me because we have found that leader,“ Buttigieg said of Biden at a campaign event in Dallas.

Klobuchar joined Biden on stage at a later rally in Dallas to announce her support for him. “We need to unite our party and our country,“ she said.

Biden’s goal on Tuesday will be to stay within reach of Sanders in delegates, giving him a chance to make up ground as the race moves on.

Bloomberg, the billionaire former New York mayor, remains a wild card as he joins the competition for the first time. The moderate skipped the first four contests and spent more than a half-billion dollars of his own money to bombard Super Tuesday and later voting states with ads, but has seen his poll numbers slip after a poor first debate.

Elizabeth Warren, a senator and progressive ally of Sanders, also remains in the running and could score a victory in her home state of Massachusetts. Polls show her trailing in other states, leaving her campaign hopes uncertain.

The pace of the Democratic race begins to accelerate after the Super Tuesday contests, with 11 more states voting by the end of March. By then, nearly two-thirds of the total delegates will be allotted.

Sanders heads into Super Tuesday with a 60-54 delegate advantage over Biden after the first four contests in the state-by-state nominating fight. Sanders managed a virtual tie with Buttigieg in Iowa and wins in New Hampshire and Nevada.

A total of 1,991 delegates is needed to win the nomination at the party’s convention in July.

Sanders has focused heavily on rolling up big margins in liberal California, which has 415 delegates available. He leads there in polls and has heavily outspent Biden on ads and in building a campaign organization.

He also leads Biden by a smaller margin in opinion polls in Texas, the second-biggest prize. His strength with Hispanics should pay dividends in that state, where Latinos are one-third of the Democratic electorate.

Biden, whose blowout win in South Carolina affirmed his popularity with black voters, will look for wins in five states where African-Americans make up at least one-quarter of the Democratic electorate – Alabama, North Carolina, Virginia, Tennessee and Arkansas.

Other states voting on Tuesday are Colorado, Maine, Minnesota, Oklahoma and Utah.

The next contests on March 10 will be in Idaho, Michigan, Mississippi, Missouri, North Dakota and Washington. – Reuters