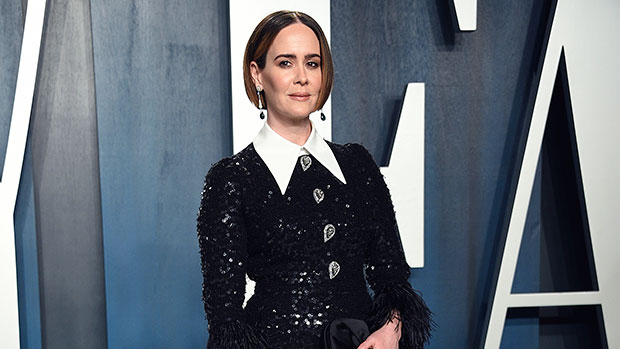 In the first glimpse of Sarah Paulson as Linda Trip for ‘American Crime Story: Impeachment,’ the actress looks exactly like the infamous White House employee!

“Linda.” That was all that Sarah Paulson captioned her Nov. 13 Instagram post, giving fans a first glimpse of her as Linda Tripp. Whoever did Sarah’s makeup just won all the awards, because the 45-year-old actress was unrecognizable. Actually, she was recognizable — as Linda Tripp! Sarah was the spitting image of the White House and Pentagon employee whose secret recordings of Monica Lewinsky led to the impeachment of President Bill Clinton.

Sarah also told her followers that principle photography on Ryan Murphy’s American Crime Story: Impeachment has begun shooting. The third season of American Crime Story was supposed to begin filming in the spring but was delayed due to the COVID-19 pandemic.

Sarah, who won a Golden Globe for portraying Marcia Clark in the first American Crime Story, spoke in June about the intense makeup job that would require her to accurately portray Linda. “This is going to require a lot of things,” she said on an episode of Jimmy Kimmel Live!, adding that she would be “earing a lot of prosthetics and body transformational accouterments, if that’s a word I can use.” Sadly, Linda will not be able to see Sarah’s work. She passed away in April at age 70 after being diagnosed with pancreatic cancer. Sarah said she didn’t get a chance to meet Linda before her death – and she didn’t meet Marcia, 67, until she was finished with The People V. O.J. Simpson.

“I don’t know if I ever would have met Linda,” Sarah told Jimmy Kimmel, “or if Linda would have even been open to doing anything like that. But I got as many text messages when she passed away as if I had died or if she was my best friend. People were like, ‘I’m so sorry to hear about Linda’ and I was like, ‘I’m really sorry to hear about it too, but I didn’t know her.’ And it was weird, because I had been spending so much time reading all these books and working with a dialect coach, so I was immersed in this. It was a very wild thing and it really did make me sad.”

The actual Linda Tripp was a career civil servant. After working two decades as a secretary for the military, Linda landed a position working within the White House in 1990, per the Washington Post. After Bill Clinton defeated George H. W. Bush, Linda stated in the White House for two years until she transferred to the Pentagon’s public affairs house. Her literary aspirations – she wanted to write a book about working as a secretary for two presidents – would lead to Clinton’s impeachment. In 1996, Linda met Monica, a former White House intern who was in the midst of a two-year affair with the president. The two became close, and Monica began to share details about her tortured affair with a married man.

Linda shared this info with her literary agent, a conservative critic named Lucianne Goldberg, who urged his client to record her conversations. She recorded 22 hours of Monica’s confessions, and in January 1998, she handed them over to independent counsel Ken Starr. Clinton was impeached for lying under oath and for obstruction of justice but was acquitted by the Senate. Linda was eviscerated in the press, portrayed as a duplicitous woman who betrayed her friend (though Linda has always argued she wasn’t motivated by politics, but by morality.) She was fired on her last day of Clinton’s presidency (as a political appointee, she refused to resign) and relocated to Virginia to run a holiday store.

In America Crime Story: Impeachment, Booksmart’s Beanine Feldstein will portray Monica Lewinski, while Clive Owen will play Bill Clinton. The actual Monica is working with the series as an executive producer, and Ryan Murphy said that Impeachment will give Monica a long-overdue redemption.