Saudi Arabia's Oil Tanker Flotilla Is Reaching The U.S., Despite Some Objections 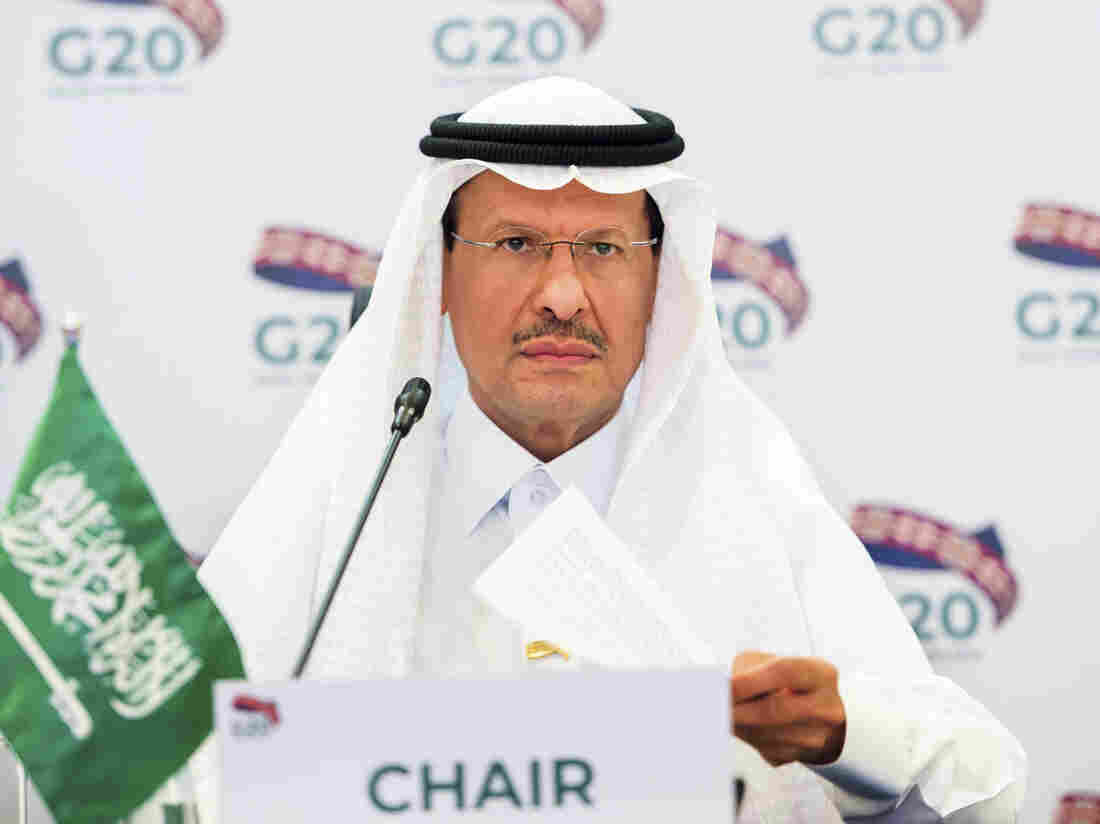 Saudi Prince Abdulaziz bin Salman Al-Saud, minister of energy of Saudi Arabia, chairs a virtual summit of the Group of 20 energy ministers at his office in Riyadh, Saudi Arabia, on April 10, to coordinate a response to plummeting oil prices due to an oversupply in the market and a downturn in global demand due to the pandemic. Saudi Energy Ministry via AP hide caption 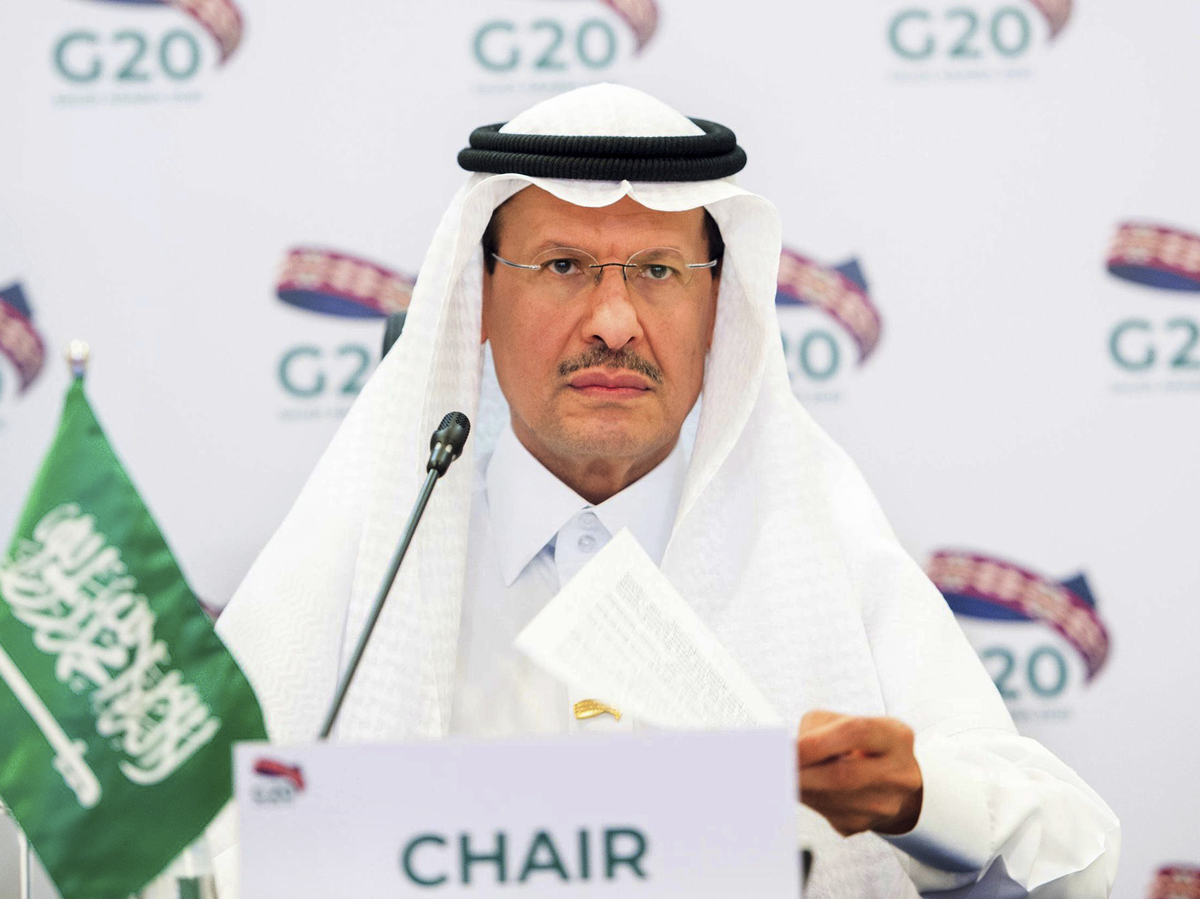 Saudi Prince Abdulaziz bin Salman Al-Saud, minister of energy of Saudi Arabia, chairs a virtual summit of the Group of 20 energy ministers at his office in Riyadh, Saudi Arabia, on April 10, to coordinate a response to plummeting oil prices due to an oversupply in the market and a downturn in global demand due to the pandemic.

A flotilla of Saudi tankers loaded with crude oil has begun arriving on the U.S. Gulf Coast, worrying American shale producers who face uncertainty because of an oversupply of oil.

At least 18 very large crude carriers, each carrying 2 million barrels of oil, are headed to the U.S., according to Michelle Wiese Bockmann, markets editor and oil analyst for Lloyd’s List, a shipping news service in London.

The first tanker, the Dalian, arrived last Friday and is floating off the coast of Houston and has yet to discharge any of its cargo, according to Lloyd’s shipping tracking. The last one is due to arrive at the end of May.

All the ships were loaded in eastern Saudi Arabia in late March and early April, Wiese Bockmann says.

The surge in Saudi oil shipments comes amid an oil glut and an estimated 30% drop in global demand because of the coronavirus pandemic. It also adds to tanker congestion at U.S. ports, as fuel storage runs short. American oil producers and senators are pressuring the Trump administration to block the shipments.

Saudi Arabia began filling the tankers during a spat with Russia over production levels. With the lowest oil prices in years, Saudi Arabia wanted to limit global production to boost prices. Russia refused, so Saudi Arabia cranked the spigots on full, pumping millions of extra barrels a day in a bid to grab market share. Prices plummeted, helped by a sharp drop in demand from the pandemic.

In mid-April, President Trump weighed in to help end the fight between Russia and Saudi Arabia. Both sides, along with other oil producing nations, agreed to cut production May 1.

Analysts believe much of the Saudi oil headed to the Gulf Coast has been purchased by U.S. refiners at deeply discounted prices, and some of it was sent on spec. The Saudis chartered some of the tankers, including one for a whopping $ 350,000 per day, Bockmann says.

“They were so keen to get this armada of oil over to the U.S. Gulf, they paid this crazy money,” she says.

There is growing anger among U.S. producers and politicians from shale oil-producing states, worried that Saudi Arabia will flood the market with cheap oil.

“We’re allowing Saudi Arabia to continue to have such easy access to the American markets at a time when it is Saudi Arabia, in my view, that is largely responsible for the great supply glut,” North Dakota Republican Sen. Kevin Cramer told NPR.

20 tankers—filled w/ 40mm barrels of Saudi oil—are headed to the US. This is SEVEN TIMES the typical monthly flow. At the same time, oil futures are plummeting & millions of US jobs in jeopardy. My message to the Saudis: TURN THE TANKERS THE HELL AROUND. https://t.co/gYoQzvHAEQ

Cramer is part of a growing chorus calling on President Trump to stop the Saudi oil from reaching American refineries. The senator says he would favor placing tariffs on the crude, but would go even further, calling for the withdrawal of U.S. troops and weapons from Saudi Arabia.

“Why would we put 2,500 troops in harm’s way and a whole bunch of missile defense systems in Saudi Arabia to defend their oil when they’ve declared war on our oil?” Cramer says.

Even though the U.S. is a leading oil producer, it still imports more than 5 million barrels a day to meet domestic consumers’ needs, according to Frank Macchiarola, a senior vice president of the American Petroleum Institute, a trade association.

“Some refineries are configured, or optimized, to better use the medium sour crude” that Saudi Arabia produces, he says.

President Trump has indicated he wants to help U.S. oil producers. But critics say Trump has been soft on Saudi Arabia, turning a blind eye to the devastating air offensive in Yemen, human rights abuses and the killing of Saudi journalist Jamal Khashoggi.

Kirsten Fontenrose, a former senior official in charge of the Trump administration’s policy toward Saudi Arabia, acknowledges Trump’s close relationship with the kingdom.

“There is this kind of personalized relationship between the president and the Saudi royal family that began when the president made his big trip out there in 2017,” she says.

Fontenrose, now with the think tank the Atlantic Council, says the Trump administration sees Saudi Arabia as a valuable ally it needs to stick with.

“We can either just sort of write them off and then wind up with lots of other problems down the road. Or we can say, ‘OK, this is unacceptable,’ ” she says, while the U.S. tries to “mentor behavior change” in Saudi Arabia.

The Saudis may not have gotten that message, judging from the millions of barrels of crude oil heading to the Gulf coast.