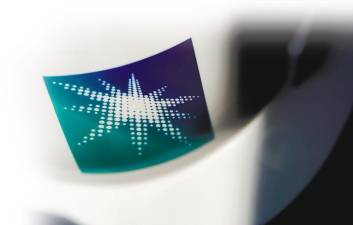 RIYADH: Saudi Aramco today reported a 20.6% drop in 2019 net profit due to lower crude prices and production levels, in its first earnings announcement as a listed company amid an escalating price war.

The world’s most valuable firm also announced it was slashing its capital expenditure for this year, as the price war with Russia and the spreading coronavirus pandemic rattle energy markets.

These are the first financial results after Aramco’s historic US$ 29.4 billion (RM126 billion) initial public offering and listing on the domestic Tadawul exchange last December. Last week, Aramco shares slipped below the IPO price for the first time.

“The decrease was primarily due to lower crude oil prices and production volumes, coupled with declining refining and chemical margins.”

The company also declared US$ 1.6 billion of impairment provisions for losses associated with Sadara Chemical Company, an Aramco subsidiary.

Despite a drop in earnings, Aramco said it distributed a dividend of US$ 73.2 billion in 2019. Based on its commitment under the IPO it intends to declare an annual dividend of $ 75 billion in 2020, it added.

“2019 was an exceptional year for Saudi Aramco. Through a variety of circumstances – some planned and some not – the world was offered unprecedented insight into Saudi Aramco’s agility and resilience,” CEO Amin Nasser said in the statement.

The company is bracing for financial pain as the coronavirus outbreak saps global demand for crude and the ongoing price war between Riyadh and Moscow sends oil markets into a tailspin.

Nasser said the company had taken steps to “rationalise” its planned 2020 capital spending.

Aramco’s capital spending last year dropped to US$ 32.8 billion from US$ 35.1 billion in 2018, the statement said. It expects capital spending, which includes expenditure on projects, to be between US$ 25 billion and US$ 30 billion this year “in light of current market conditions and recent commodity price volatility”.

“The recent COVID-19 outbreak and its rapid spread illustrate the importance of agility and adaptability in an ever-changing global landscape,” Nasser said.

The price war, likely to weaken Aramco’s 2020 first quarter earnings, was triggered by Russia’s refusal to agree on additional output cuts to support prices dented by the coronavirus outbreak.

An apparently furious Riyadh responded with a massive production hike and the biggest cuts to prices in two decades, moving to snatch some of Russia’s market share and triggering market turmoil.

“The real question everyone wants to know is what’s happening in Q1 2020,” said Ellen Wald, author of the book Saudi Inc.

“The … insight won’t arrive until the next earnings call when we learn how Aramco dealt with the current oil market drama and Saudi politics.”

In its latest monthly report, the Organization of Petroleum Exporting Countries lowered its forecast for global average daily demand by 0.92 million barrels to 99.73 million barrels.

Sources said they were accused of plotting a palace coup to unseat the Crown Prince Mohammed bin Salman, heir to the Saudi throne and de facto ruler.

Aramco shares rallied immediately after the listing on Dec 11, rising by 19% to 38 riyals (RM42.33) and temporarily lifting the company’s valuation above the $ 2 trillion mark, which was sought by the crown prince.

But as oil prices tumble, Aramco shares have lost 29% from its highest point, slipping below the listing price. On Thursday, Aramco’s market value dropped to around US$ 1.55 trillion, but it still remains the world’s largest publicly listed company. – AFP