Save your bacon: A real meat shortage looms with virus shutdowns 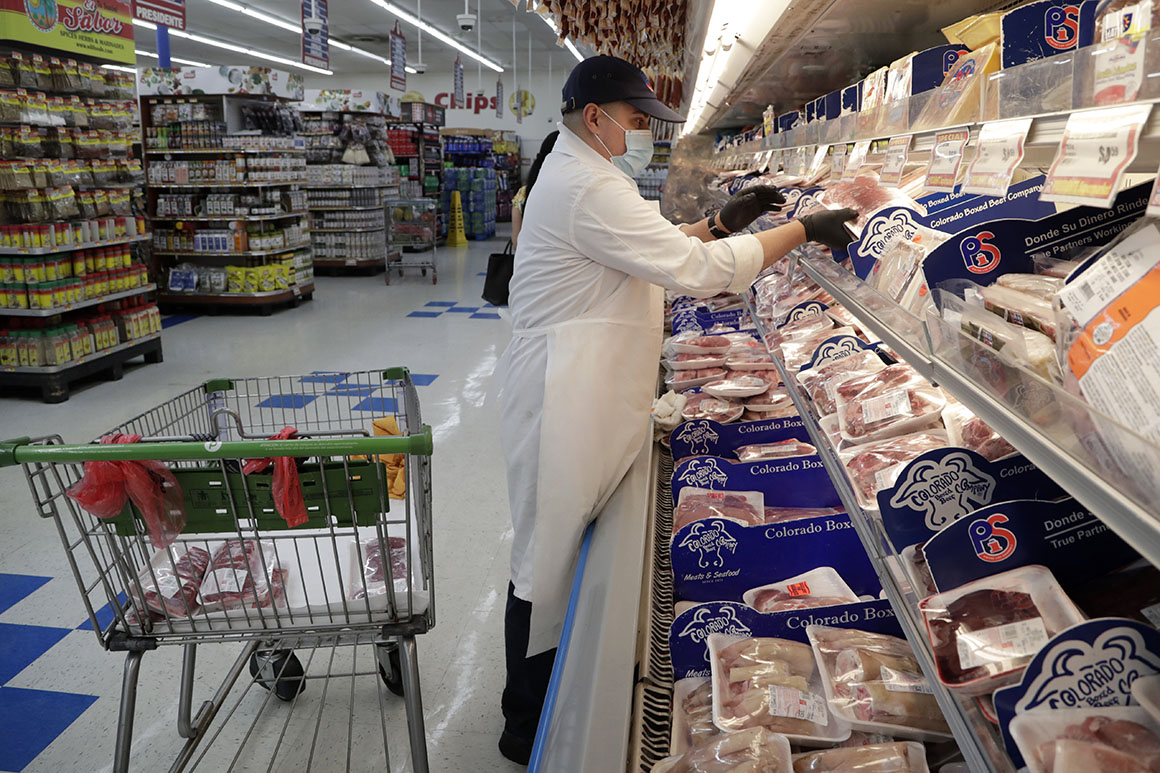 Americans could start to see shortages of pork, chicken and beef on grocery shelves as soon as May as major packing plants swept by the coronavirus remain shuttered and the nation’s massive stockpiles of frozen meat begin to dwindle.

Any empty shelves to date have been the result of bumps in the supply chain, with stores being unable to restock as quickly as customers are buying. But bacon, pork chops and ham could be the first to face actual shortages: The amount of frozen pork in storage nationwide — more than 621 million pounds — dropped 4 percent from March to April, the USDA reported this week. Slaughter rates are down 25 percent, and 400,000 animals are backed up in slaughterhouses.

And with meat plants of all kinds operating at 60 percent of capacity, shortages loom for beef and poultry as well. That could also lead to higher prices and a financial squeeze for farmers, who are collecting less per animal slaughtered.

“If we start to see more closures and these facilities remain offline for a prolonged period of time, it’s hard to imagine a scenario in which consumers don’t see changes at the supermarket,” said David Ortega, an agricultural economist at Michigan State University.

Multiple economists who spoke with POLITICO said May could be when consumers have fewer options when buying meat.

There is enough — for now. The Agriculture Department’s monthly tally of meat in warehouse freezers showed total pounds of beef — about 502 million — were up 2 percent. Poultry in storage went up 4 percent, to 1.3 billion pounds. The amount of chicken in storage dipped slightly to about 921 million pounds.

But the pipeline bringing meat from farms to stores is slowing. The dip in daily pork slaughter rates “is troubling, especially for producers,” said Scott Brown, a University of Missouri agricultural economist. “If these keep declining at the rate we have seen recently then we need to worry,” he added.

Meatpacking plants have become coronavirus hot spots because workers operate in close conditions and many have not been equipped with adequate protective gear. After cases began to mount, some companies have implemented safety precautions, such as spacing workers along slaughter lines and installing plexiglass barriers.

Hundreds of workers have tested positive for the coronavirus and several have died, as have at least two meat safety inspectors employed by the U.S. Department of Agriculture who worked in the plants.

Unions representing safety inspectors and plant workers have urged the Agriculture Department to step in with specific guidance on how to deal with coronavirus outbreaks in processing plants. But the agency has instead deferred to the Centers for Disease Control and Prevention and left it to companies to determine their own safety precautions.


Meat processing is so consolidated that shutting down just a handful of plants can cause significant disruptions to the industry.

Tyson Foods announced on Wednesday that it was closing its largest pork plant in Waterloo, Iowa. Together with the prior closure of another Tyson pork plant in Logansport, Ind., that accounts for 7 percent of U.S. pork processing capacity. At least 13 plants have been closed in the last month due to outbreaks, according to the Food and Environment Reporting Network, a nonprofit news organization.

With fewer plants to receive hogs, farmers are being forced to euthanize their pigs because there’s a small window of time animals are ready to be processed must be killed. Some economists estimate that the pork industry could lose up to $ 5 billion throughout the rest of the year.

ByDanielle OngKEY POINTS Fauci said he was not surprised that Trump contracted the novel coronavirus following the Rose Garden event The superspreader event was attended by...
Read more
US