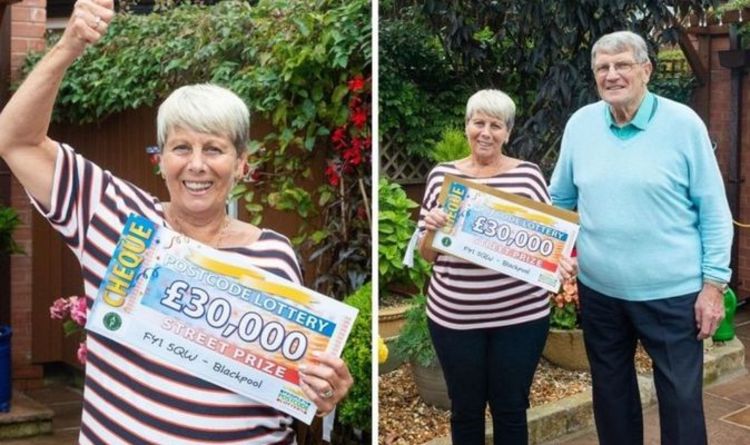 A schoolboy had his grandparents smiling with his reaction to them winning £30,000 on People’s Postcode Lottery.

Lucky Susan Spearman, 68, was one of eight neighbours from Blackpool who recently scooped £240,000 between them.

Each of the winners received visits from People’s Postcode Lottery ambassador, Judie McCourt, who revealed their cheques.

The visits were pre-arranged and special arrangements were in place to ensure social distancing rules were observed.

But when Susan broke the news of the win to her family and grandchildren, one of the youngsters got a little too excited.

She explained: “I don’t think it’s really sunk in how much it is. I’m still floating.

“We have a few grandchildren who we will treat too. My youngest is nine and after he came home from school he said, ‘Wow nana are you a millionaire?!’

“I told him I wasn’t quite, but it was still plenty!”

Susan lives with her husband Joe, who was celebrating his 88th birthday on the winning weekend.

Susan added: “This is just fantastic! I had no idea how much it would be, so I just tried to think small.

“We’ve ordered a new front door for £2,000 and I said to my husband I’d be happy for it to just cover that. Well it’s a lot more than that!”

The couple plan to spend their winnings on a dream holiday across Canada, as well as treating their family.

Judie McCourt, People’s Postcode Lottery ambassador, said: “Huge congratulations to all of our winners in Blackpool!

“I usually like to give our lucky winners a big hug and it’ll be a while before I can do that again. But it was lovely to see their reactions – even from a distance!”

People’s Postcode Lottery costs £10 a month to play and there are guaranteed winners every day.

People play with their chosen postcode and are automatically entered into all draws.

A minimum of 32% of ticket sales goes directly to charities and players of People’s Postcode Lottery have helped raise over £600 million to date for thousands of good causes across Britain and internationally.

This draw was promoted on behalf of ActionAid. Players have raised over £9.7 million for the charity, enabling it to work in over 45 countries to help change the lives of some of the most disadvantaged children and women.

Players must be 16+. BeGambleAware.org.

ByJust hours after reassuring news revealed the Oxford/AstraZeneca vaccine was up to 90 percent effective, Mr Johnson has urged the public to get a...
Read more