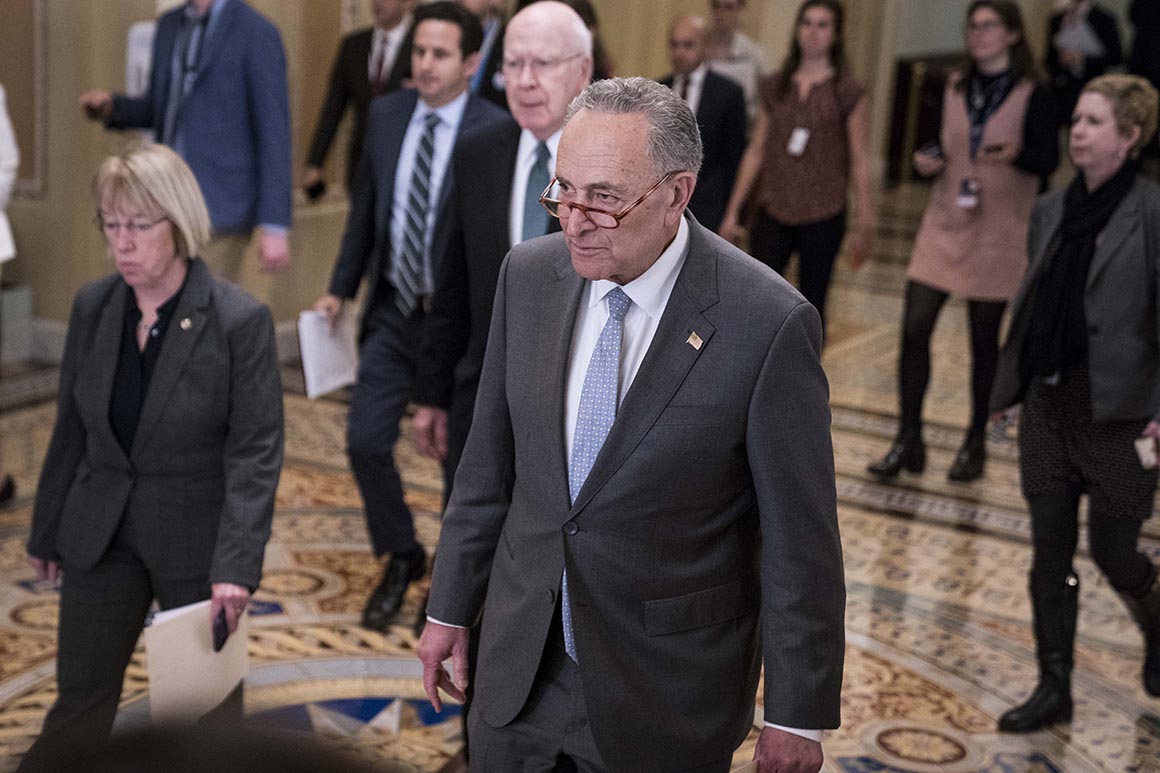 Chuck Schumer and his Senate Democrats have found a go-to play in this pandemic: an old-school blockade.

Amid a coronavirus outbreak that’s crippling the economy, Schumer’s caucus is digging in for longer fights with Republicans and embracing tough tactics that previously made Senate Democrats queasy. But the voluble minority leader argues that his hard line is paying off — and that it hasn’t even been that difficult to keep his ideologically diverse party united.

“It was remarkably easy to hold together as a caucus. And some of the most outspoken people were some of our most moderate people,” Schumer said in an interview of Democrats’ decision to reject Senate Majority Leader Mitch McConnell’s initial proposal to quickly approve $ 250 billion in aid for small businesses.

“Our caucus has shown a unity that [McConnell] refuses to acknowledge, to his detriment,” the New York Democrat added.

Republicans ripped Democrats for holding up action on a popular small-business program for nearly two weeks, even after its funding expired and unemployment swelled. It could even be a potent electoral attack. But Democratic leaders point to concessions they won by standing firm, even as the left complains it’s not enough.

It’s the second time Schumer’s caucus stifled McConnell’s legislation in a month’s time on a massive coronavirus rescue package, holding their ground far longer than during previous showdowns so that Democrats could put their imprint on the bill.

McConnell said in a separate interview that the longer Democrats delayed the small-business portion, the more obvious it became that hospitals and testing would need to be included in the package. He icily rejected the notion that Schumer’s strategy resulted in the inclusion of anything that wouldn’t have eventually passed anyway.

“You should be familiar with that. There’s never been a deal that Schumer didn’t win,” McConnell said. “All I can say — I’m saying it with a smile on my face — is there hasn’t been a deal that he didn’t dominate. According to him.”

Still, it’s an extraordinary turn from just two years ago, when Senate Democrats blinked in a matter of days after forcing a government shutdown over President Donald Trump’s immigration policies. In return for reopening the government, they received the fig leaf of an immigration debate that quickly fell apart and left Republicans crowing about the failed “Schumer shutdown.”

This time around, Democrats again faced withering criticism from the GOP. Yet Schumer and his Senate Democrats held out for a deal that delivered billions of dollars for hospitals, testing and underbanked businesses. Still, the ultimate agreement fell short of the ambitions initially laid out by Schumer and Speaker Nancy Pelosi; it did not include $ 150 billion for struggling state and local governments to deal with the coronavirus fallout.

Whether Democrats got enough out of their fights will be dissected for weeks and months to come. Already, progressives are furious that the party relented on some of its demands and kicked those battles until the next brouhaha with McConnell.

What’s less debatable is that after three years under Trump’s presidency, Senate Democrats are more comfortable than ever blocking emergency legislation and then holding the line. In the past 13 months, Democrats have stopped a Puerto Rico aid bill, a popular defense bill and two coronavirus relief bills before winning changes and then passing them.

The Senate minority plays a critical role in Washington’s balance of power because of the supermajority threshold used to pass most legislation. McConnell himself became a master of using the filibuster to shut down Democrats’ priorities and extract concessions on big fiscal deals when Barack Obama was president.

The GOP’s hard line didn’t cost them. Republicans took full control of Congress after the 2014 midterms and made McConnell majority leader, with Trump winning the White House two years later.

Schumer denied he was pursuing the same tactics during the Trump administration that Republicans wielded against Obama: “No. What we’re doing is on the substance. We’re right, and we believe in it strongly.”

Other Democrats also dismiss such comparisons, even if Republicans scoff. Sen. Ted Cruz (R-Texas), a master of blocking Democratic bills in the Obama era, accused Democrats of “holding small businesses and employees hostage in order to push through their partisan agenda.”

“It’s not just in our nature to be obstructionist for the sake of being obstructionist. … It’s not that we’re trying to play the same game,” countered Sen. Chris Murphy (D-Conn.). “There’s just unanimity in the caucus about what needs to be done and what has been lacking in the initial Republican proposals.”

The dynamics of Washington have also changed dramatically from two years ago, when the aborted government shutdown provoked rage among liberals and some congressional Democrats when the party folded so quickly. Schumer’s caucus is now backed up by a Democratic House majority and he has just two truly vulnerable Senate incumbents this year compared with 2018, when 10 Democratic senators from states that Trump won were up for reelection.

Still, it’s remarkable how comfortable Senate Democrats have become while taking days of incoming from the GOP on charges of obstruction. Even former Small Business Administrator Karen Mills, who served under Obama, questioned their strategy.

But Democrats said they established their negotiating position at nearly the same time that McConnell made his move to try and push through the $ 250 billion for small businesses. Democrats promptly blocked McConnell, who then rejected their alternative. That stalemate held for more than a week.

On April 7, Senate Democrats held a conference call in which senators like Joe Manchin of West Virginia and Martin Heinrich of New Mexico said they couldn’t just fork over that money without changes to the program, according to a person on the call.

“Boy, no. And I was on numerous calls with senators," said Sen. Patty Murray (D-Wash.), when asked whether Democrats ever considered bending. "What we didn’t want to see is one slice of this [pass] and then be told: ‘That’s it, we’re not doing anymore.’"

Despite Schumer and Pelosi celebrating the inclusion of $ 60 billion for underbanked businesses, $ 60 billion in economic disaster relief, $ 75 billion for hospitals and $ 25 billion for coronavirus testing, there’s plenty of consternation among progressives.

Liberal lawmakers and activists are hoping for big structural changes in these coronavirus response bills, like a national vote-by-mail program, or at least more money for beleaguered localities and the U.S. Postal Service.

Rep. Pramila Jayapal (D-Wash.) complained Democrats are “giving away leverage now”; and Rep. Alexandria Ocasio-Cortez (D-N.Y.) said it was “insulting” for Congress to “pass such a small amount of money, pat ourselves on the back and then leave town.”

Schumer said those gripes will be addressed in a “big, bold and strong” rescue package down the line. McConnell, however, is already throwing cold water on the idea of sending tens of billions of dollars to states and cities whose budgets have been gutted by the coronavirus.

Forget including other policies preferred by the left.

“Our biggest challenge is to keep this from including the Green New Deal and a whole list of other things that they might have wanted to put into it that were not coronavirus-related,” McConnell said.

On the next bill, Democrats are already signaling they’ll be comfortable running the same playbook as the past two rounds, when they initially blocked aid packages to force further negotiations. They say the results speak for themselves.

“Let’s remember what happened,” Murphy recalled telling his colleagues on a conference call Tuesday. “Because this is a signal that if we stick together and hold our ground, we can get our priorities heard.”