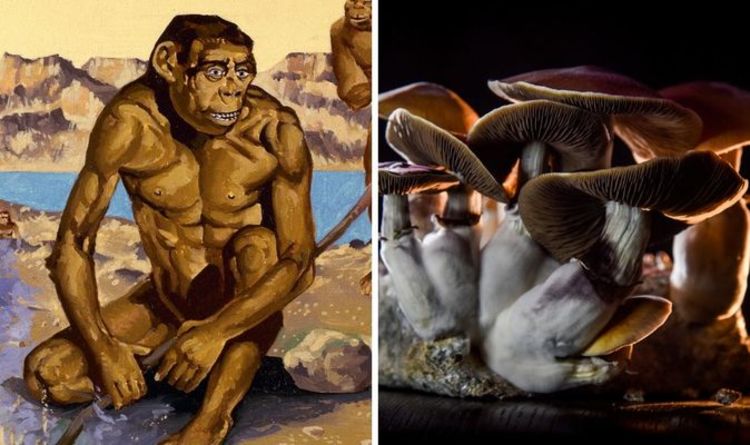 The idea, known as the “Stoned Ape” theory of human evolution, came to prominence in the 1990s. The term was coined by American scientists and ethnobotanist Terence McKenna in his 1992 book ‘Food of the Gods’, where he proposed that climate change in Africa hundreds of thousands of years ago resulted in humans consuming Psilocybe cubensis, more commonly known as magic mushrooms.

Desertification of the African continent forced early primates to venture into the shrinking tropical canopy in search of food.

In doing this – mainly tracking animals – the theory says primates would have come across animal dung, the perfect growing grounds for fungi.

Paul Stamets, a mycologist and enthusiast of the theory, explained the extent to which the theory might be proven during the PowerfulJRE podcast in 2017.

He said: “The most significant fleshy mushroom growing out of poop in Africa of the hippopotamus, elephant, deer, antelope, is Psilocybe cubensis, a very large mushroom, you’re hungry, you’re with your clan, and 20 minutes later you’re catapulted into this extraordinary experience.

“Psilocybin substitutes serotonin – it becomes a better neurotransmitter, it causes new neurons to form, and new pathways of knowledge.

“It speaks to a mystery that the human brain cavity doubled in size in about two million years.

“We have a sudden doubling of the human brain and with that our language centres increased our ability to prognosticate, to plan.

One population of Homo erectus remained in Africa and evolved into Homo sapiens – the only surviving human species.

Mr Stamets proposed how this remaining population could have had their world dramatically changed through the new experiences offered by the fungi.

He said: “Even though we may not be able to prove it, I ask people to suspend their disbelief for a second.

“Now think of this: Our primate ancestors are going across the savannah, they ingest these mushrooms as a clan.

“Massive input for anyone that’s eaten these mushrooms, huge amounts of data coming in with different patterns and changing landscapes.

“You have greater empathy, greater courage, you’re fighting a saber toothed tiger, we know now from neurogenesis and the extinction of the far response it’s been clinically proven, psilocybin allows you to rewire that and have different neurological pathways to respond to fear, like PTSD.

“This leads to what I think should be called epigenetic neurogenesis.