Scientists May Be Able to Treat Tinnitus With Electronic Music...

People who experience tinnitus might finally have some hope for alleviating their symptoms, after an experimental device that stimulates the tongue was found to ease the condition in a sample of 273 volunteers with a chronic case of it.

The tongue buzzing is combined with a carefully prepared audio stream fed through headphones, sounding a little like ambient electronic music. The combined treatment caused an improvement in symptoms for 86 percent of the participants, with an average drop of around 14 points on a tinnitus severity ranking scored from 1 to 100.

Even better, the improvements lasted for up to a year for many of the individuals involved. These are promising signs for the 10-15 percent of people worldwide who live with the phantom sounds and ringing ears caused by tinnitus. 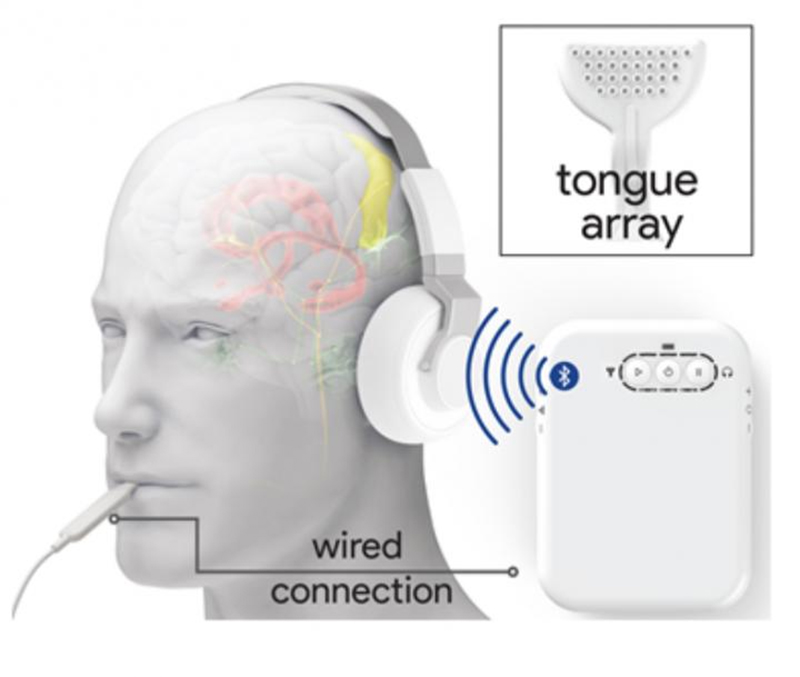 Developed by Neuromod Devices in Ireland, the device – called the Lenire – aims to heighten the sensitivity of the brain, effectively crowding out the overactive parts of the brain that would otherwise cause tinnitus symptoms. Neuromod worked with researchers from the UK, Germany, the US, and Ireland on the new study.

“If you make the auditory brain more sensitive to many inputs and acoustic stimuli, then it becomes distracted away and less sensitive or aware of the tinnitus,” neuroscientist Hubert Lim, from the University of Minnesota and Chief Scientific Officer at Neuromod, told New Scientist.

“This is how we believe the treatment is working.”

The cause of tinnitus isn’t fully understood, but it’s thought to be connected to faulty neuron wiring in the brain – wiring that is potentially overcompensating for some other problem, causing sounds to be heard that aren’t actually there.

The combination of tongue stimulations delivered by a small electrode-packed paddle – stimulations that feel like popping candy – and the white noise and musical tones delivered over headphones looks like it could help.

Subjects took treatments of up to an hour a day for 12 weeks, with both the tongue popping and the ear pulsing personalised to each participant’s level of sensitivity. The device is controlled by the person using it, which means Lenire is potentially something that can be used in people’s homes.

This approach of mixing sounds and electrical stimulation is technically known as bimodal neuromodulation, and this isn’t the first time it’s been linked to improvements in tinnitus. However, there was no control group involved in the study, and more research will be needed before Lenire can be put on the market.

“This study tracked the post-treatment therapeutic effects for 12 months, which is a first for the tinnitus field in evaluating the long-term outcomes of a medical device approach,” says Lim.

“The outcomes are very exciting and I look forward to continuing our work to develop a bimodal neuromodulation treatment to help as many tinnitus sufferers as possible.”

The research has been published in Science Translational Medicine.