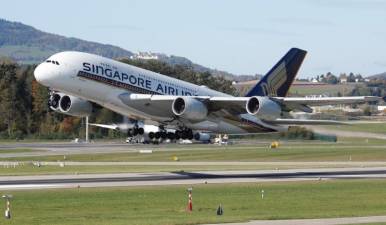 MANILA: Southeast Asian countries considered more emergency powers on Monday to tackle the threat of the coronavirus as Singapore Airlines said it was grounding almost all of fleet in the face of the “greatest challenge” it has ever faced.

The virus has infected about 3,700 people across Southeast Asia, with nearly 100 deaths, more than half of them in the region’s most populous country, Indonesia.

The Philippines has confirmed 396 cases and 33 deaths. But health officials acknowledge limited testing for the coronavirus means, that like Indonesia, its already overstretched health system could be facing far more infections than the numbers indicate.

Governments are scrambling to raise their defences with border closures, entry bans and lockdowns.

The Philippine Congress held a special session to consider allowing the government powers including taking control of private utilities, telecoms and transport operators or businesses in the public interest, and forcing hotels and other venues to accommodate medical workers or quarantine people.

“It is a step we were reluctant to take, but the circumstances and the experience of nations worldwide convinced us that we have no other choice,“ Duterte’s Executive Secretary Salvador Medialdea told a near-empty Congress, with most lawmakers streaming the session at home.

Duterte’s has a supermajority in both chambers, so the bill is expected to pass, although the opposition is concerned about the scope of the powers and potential for abuse.

The Philippines was the first Southeast Asian country to adopt lockdown measures, with borders closed to foreigners and tens of millions of people in home quarantine.

But more are following suit as cases soar, with Vietnam and Malaysia deploying soldiers to help with quarantines or to enforce curbs on travel and gatherings.

Malaysian Prime Minister Muhyiddin Yassin said the government may consider extending movement restrictions by up to two weeks, and would announce more economic stimulus to soften the blow from the coronavirus and weak oil prices.

Global travel hub Singapore, the small but most economically advance country in the region, announced on Sunday a ban on short-term visits and even on transit stops, after a surge of imported cases, most in people returning from Europe and the United States.

Singapore reported 23 new cases on Sunday taking its tally to 455.

The scale of the disruption was brought home when Singapore Airlines said it was cutting capacity by 96% and grounding almost all of its fleet.

Shares of the airline, majority owned by Singapore state investor Temasek, fell more than 9%, outstripping losses in the broader market, which was down 7% and on track for its biggest daily drop since October 2008.

Globally, there are now more than 337,500 cases of coronavirus and more than 14,650 deaths related to it, according to a Reuters tally. -Reuters